Continuing the series, as part of a large IT transformation that I helped drive, it was necessary for us to hire 20+ talented IT professionals. And add to that around 30 mostly Indian colleagues that were to join us to run the Transition and Transformation (T&T) program. And add to that at least two other large IT teams we wanted to co-locate. And because we had so many people, it was necessary for us to locate and rent a building dedicated to IT. So I had a once-in-a-lifetime opportunity to take off my IT transformation hat and put on my facilities management hat.

This blog series recollects a bit of the journey before too much time passes and I forget some of the more interesting details.

No photos here. The negotiations about rent were a nice learning experience for me. At least in this area of Switzerland the value of the building is tied to the rental price, so the owner was absolutely unwilling to lower the rent. However, that does not mean we could not negotiate: we discussed how many months “rent free” we would get. This included not only the building itself, but the parking spaces adjacent to the building. As well as other topics, such as the needed paint, carpets, small cosmetic repairs, upgrades to the kitchen, and the like.

I also thought the negotiations had a somewhat detached and less emotional character than I had expected. The building was in fact owned by a large company that owns buildings, so the passions that I somehow expected after dealing with normal landlords and rental agencies in Europe were not there. As Michael Corleone said, “Nothing personal, it’s strictly business.”

Finally, the terms and conditions (in German: Allgemeine Geschäftsbedingungen): they were straightforward, and the procurement specialists of my company did not insist upon any changes. Probably the whole contract was no more than 15 or 20 pages, tops. What we key for us, however, were the termination clauses and exit conditions, since my company was considering a general consolidation of all offices in Switzerland into a central location.

What was also part of the contract is how and how often the exterior of the building would be cleaned. Most buildings in Switzerland have windows that are covered with louvers, and these get dirty and need to be periodically cleaned.

There were two categories of third party providers I was involved with: one-time, and ongoing.

The most important one-time third party was an electrical company that I contracted to finalize all the needed power and LAN cable hook-ups.  The building floor was elevated, so this meant snaking the cables to holes located under what would be the future desks.

Here’s a nice snap that shows one of the holes: 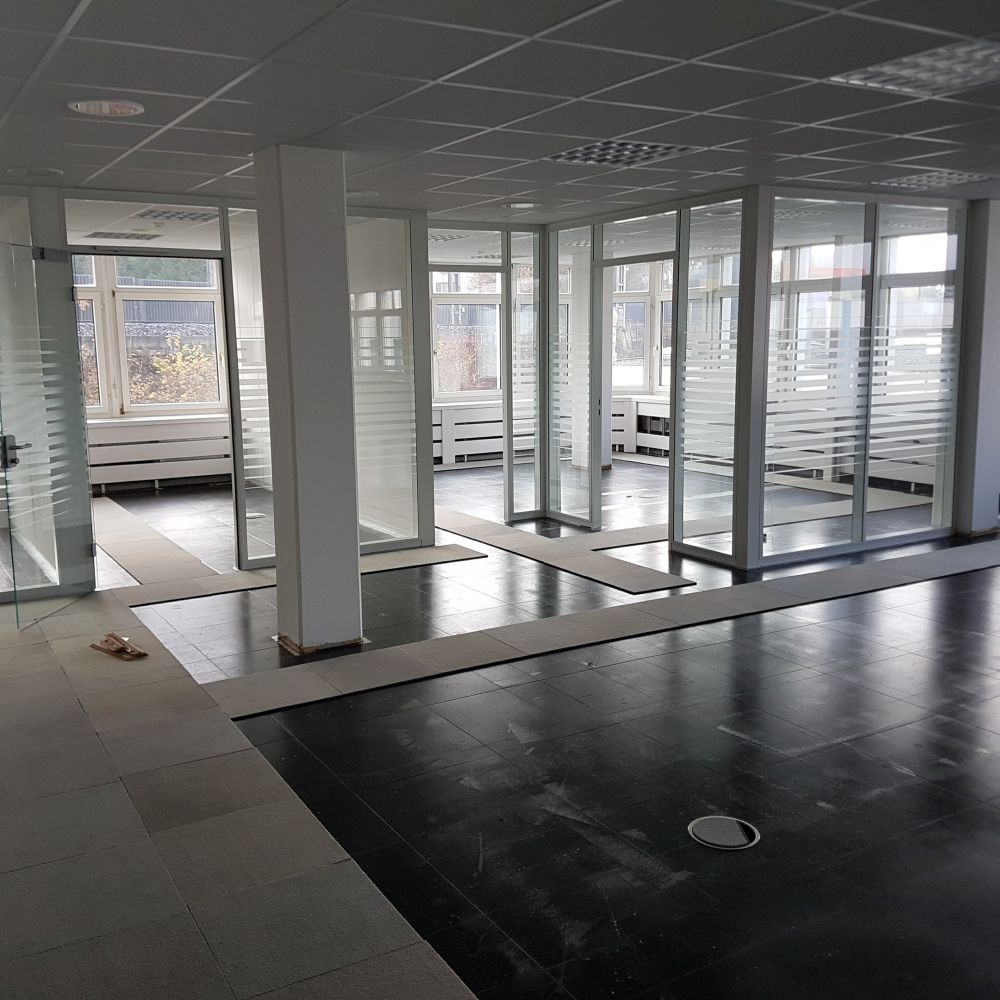 This was an interesting experience for me. It was a true learning moment – and if you are new to this business, maybe you can learn from it too?

Together with Christian (see my last blog series) we contacted three different electrical companies in order to get competitive offers. Each of them sent an extremely experienced person for discussions with us and to collect our requirements. This gave me – still very naive in these areas – a pretty good feeling of confidence.

But . . . after we made our selection and the installation crew showed up, it was an entirely different situation!  First, we weren’t sure exactly which language the crew spoke, but it was neither German nor Swiss German nor English nor any other languages we knew!  This is not an exaggeration by any means – we were completely unable to communicate with the crew except by using hand signals. Thankfully, our hand signals for “what the f–k are you doing???” and “get the f–k out of our building” are international in nature and gladly, were immediately understood and acted upon.

Second, even after breaking through the communication barrier, we realized we’d get the best results if we managed them quite closely. Much, much more closely than I wanted to do – but I thought back to the inputs that a real building renovation project manager gave me sometime earlier, and this seemed to confirm to me a close approach was the right one!  If my efforts here would have been greater, than I would have escalated back to the company itself – but when the end is in sight sometimes the direct approach is ultimately the easiest.

Finally, the topic that Americans refer to as “sweat equity,” or saving a lot of money by doing some jobs yourself. We determined we could save an enormous amount of costs by doing a significant chunk of the work ourselves. For it was necessary to snake LAN cables to each of the holes under what would be the desks, and this requires an incredible effort to label the cables. It’s not an effort that requires the experience and training of an electrician, so by doing this ourselves we saved four figures of cost!

I did not have any big efforts here, as the painting, minor bugfixing, and carpet installation was contracted by the building owners.

Here you can see a snap after the carpet was laid and the walls were painted: 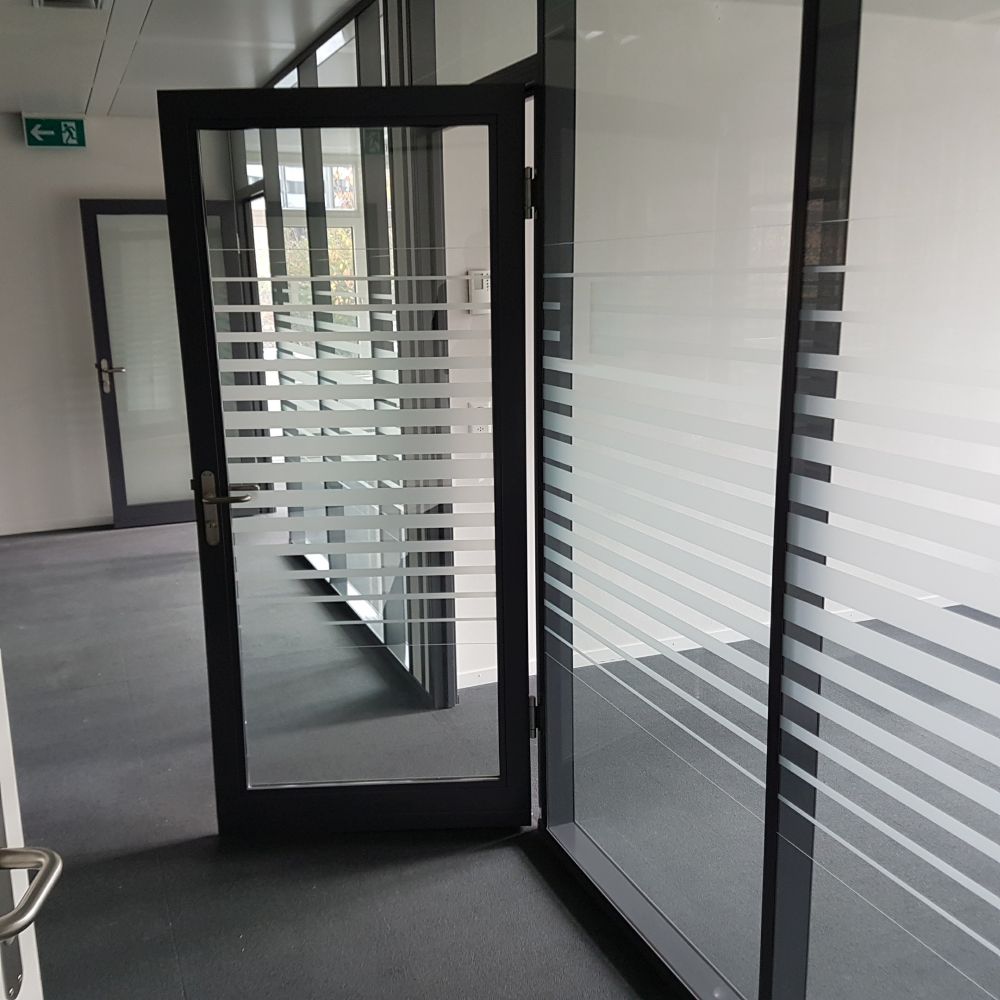 I did have a bad experience, however, and I hope other people can learn from my mistake. It turns out that whatever combination of carpet, carpet glue, and paint were used, it left an intense smell in the building. Fortunately, the planned move in date was nearly six weeks after this work went done, so I simply opened all the windows and vented the building 24×7, which removed the problem nicely. Nevertheless, after opening, there were a few colleagues that suspected we had a case of “sick building syndrome.” Sadly, it was never easy to verify this claim, since the building itself was located just a few dozen meters from a chemical factory.

Pretty tame so far, but just wait for future blog posts when I tell of the amazing adventures that were in store for me!