There are a few worthy causes where I do what I can, and helping and encouraging non-traditional people to get careers in science and technology is one of them.

I’ve volunteered my time to help university students work on thesis projects, I’ve managed students and interns professionally (and have written down the best-practices) – but a real thrill came when I was living in India and had several friends and colleagues that worked to support Indian students from lesser-priviledged backgrounds.

I was stunned but honored to be invited as the keynote speaker to this conference in a very remote village in the southern Indian state of Tamil Nadu.  The venue was a college dedicated to IT, in which the students all receive laptop computers (quite remarkable, when you consider the standard of living in India!) – and they can pursue studies based on career tracks such as Java or Microsoft .NET.

What stunned me and what I could never have expected: this tiny college, Jayaram College of Engineering and Technology, in a very remote region of southern India, had a better and more modern IT infrastructure than our main Hewlett-Packard offices in Germany!  For you see: the campus installed a real-time videoconferencing system (no easy task in 2007) that allowed them to share courses and lessons between their universities and several others.

The conference itself was fabulous. In addition to delivering the keynote speech, I also gave a technical talk about Information Lifecycle Management (ILM).  But I’ll never forget the great students who were shocked (but positively so!) when I choose to sit with them in the audience, instead of off to the side with professors.  Hierarchy and decorum in India dictate that the professors are treated with respect, so they sit in these big comfortable chairs separated from the students. But I was there to meet the students and talk to them – so what better way than to sit next to the students!

Icing on the cake – my largest ant hill yet!

Discovering and observing huge termite nests or anthills has been a hobby of mine for quite some time. I am fascinated by what scientists call “emergent behavior,” which is a fancy word to describe how huge structures like this develop stunning architectures, even though (presumably) the little insects doing the building have no idea of the overall bigger picture.

Driving back to Bangalore from Tamil Nadu I encountered the largest anthill I’ve seen in my life. It was definitely an anthill – as could be seen from the huge number of large black ants swarming all over it. And in comparison to termite mounds I’ve seen, it was largely without any external features. 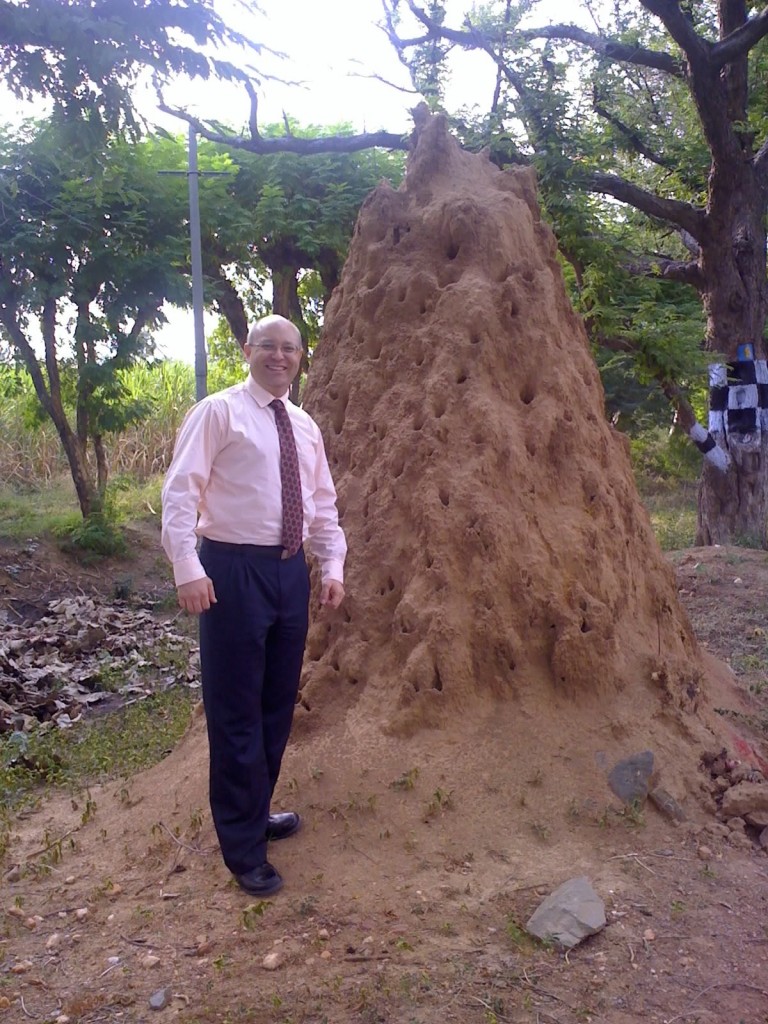 I’ve found there are plenty of opportunities to support students in the business environment, at least here in Europe, if you just look for them:

Europe is light-years ahead of the U.S. regarding how industry works with academia to bring the next generation of talented employees to the job market.

I wrote about this in the field of IT, back in 2003, you can read about it here: Students in HPCI Projects.

Interestingly, after re-reading this article after more than 15 years, I fully stand behind the way we concluded it:

„Students are a young, hard-working and enthusiastic component of our work force in Germany. In our group at HPS Consulting & Integration, we use this talent and energy to good effect, to do important things for our customers, and to generate revenue and profit for HP. However, working with students is a privilege, and success with students depends upon never forgetting this fact. With smart strategies and a bit of hard work, the benefits of working with students are enormous.“