The Quiller Memorandum is a film from 1966, starring George Segal and based on a espionage novel of the same name. Many people such as Quentin Tarrentino himself consider it the finest film in the spy genre. I fully agree. 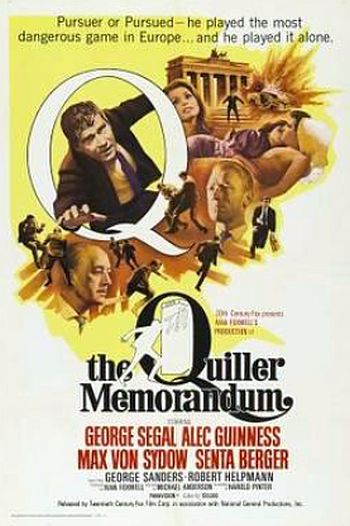 There are two great things about the film.

First, my favorite scene takes place coincidentally at exactly the street and corner where I stayed on my first trip to Berlin!  The shop in the center background is today a Müller Drogerie.

Second, there is an interesting scene involving the German language. Since I am not a native speaker, it has long confused me. In this scene, the American spy Quiller – until now denying that he spoke German – suddenly confronts his followers and speaks to them in very fluent German, even involving some local Berlinerisms that have confused me, such as sometimes exchanging dative and accusative pronouns. Even today when I visit Berlin and talk to real Berliners it can trip me up.

However, the same movie dubbed into German uses the German language throughout – and the bit where Quiller suddenly starts speaking German is overdubbed with an entirely different set of words. I’ve always found this fascinating: although the language in both cases is spoken German, my American ears find the American version to be much less polite.

You be the judge!

The scene begins as Quiller decides to confront someone who is clandestinely following him.

Just as Quiller steps up his pressure, they are joined by another clandestine colleague of the follower,

The final discourse is interesting for two reasons. First, I find the German version to be a bit more diplomatic and polite than the American version – at least to my non-native ears it sounds this way.

But . . . here is where the nuances of the German language come in!  When Quiller says “Perhaps you have not been following me” then he is looking at the entire group, not just the original follower, thus sneakily and cleverly changing the case of the formal pronoun Sie from first person formal to second person formal!

In other words – and this is only known to people who can speak German! – Quiller was telegraphing to the entire group of three people that he knew he was being followed!

Well, this place isn’t anywhere close to where the border of Switzerland touches the border of Germany. But it is in the north central Swiss town of Schaffhausen, which is the largest village and natural embarkation and debarkation point for train travellers arriving from or travelling to Germany.

And you can see that in this magnificent train station, with the “Schweizerische Bundesbahnen” on the left, and the “Deutsche Bahn” on the right.

To me it is also a powerful reminder of the two very different cultures: literally translated Schweizerische Bundesbahnen means Swiss Federal Railroads – a collection of different companies united equally into a larger framework – and the Deutsche Bahn, just one company.

Continuing the series, this is the inside of the church, 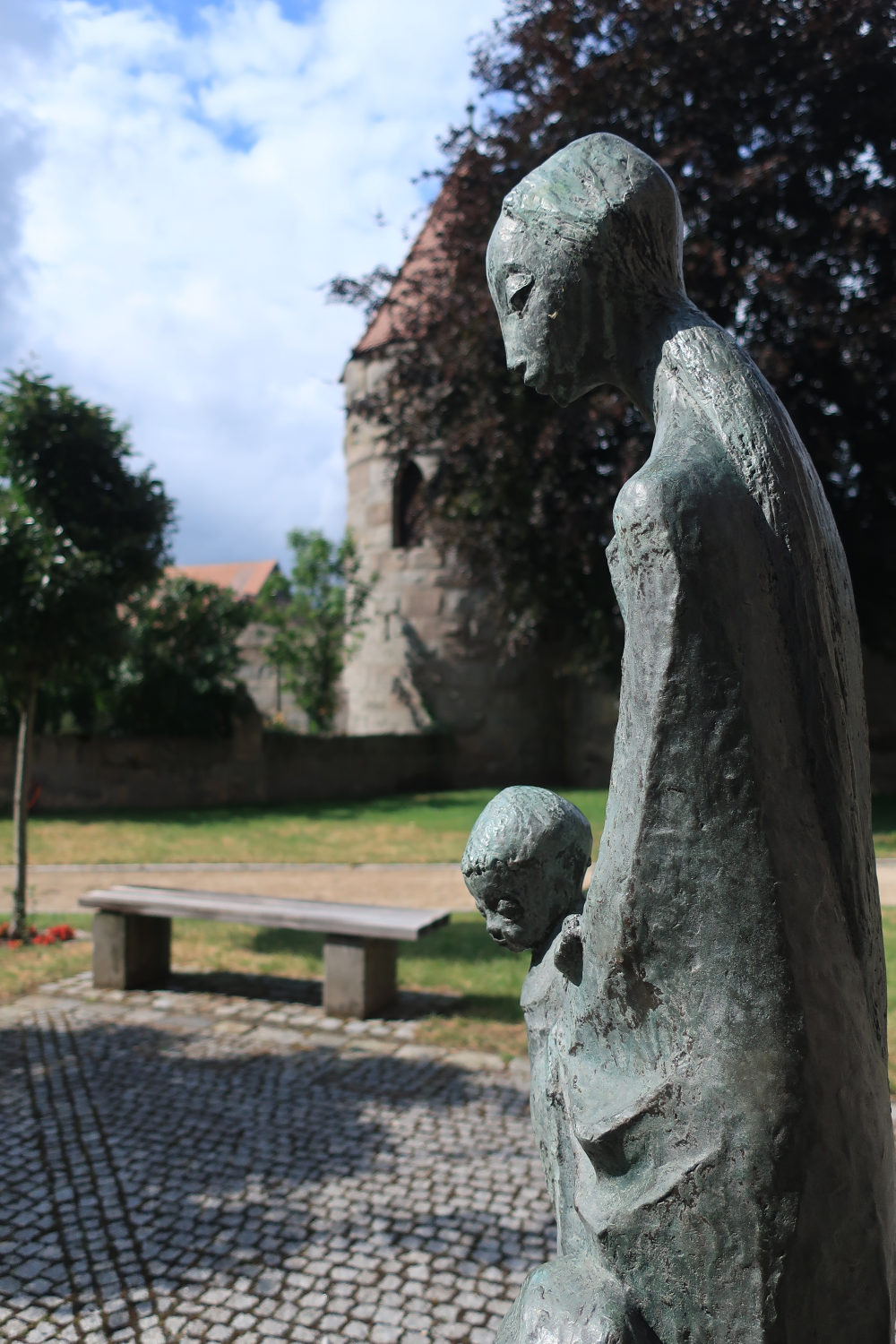 I am quite happy with the way this snap turned out. I think the shadows do a nice job of emphasizing the mother and her child (is that Mary and Jesus? I don‘t know) and the diffuse background shows sufficient detail to remind the viewer that this is a scene from the Middle Ages.

Not damn, but dam. I took this snap while visiting the Franconian village of Bamberg, in Germany: 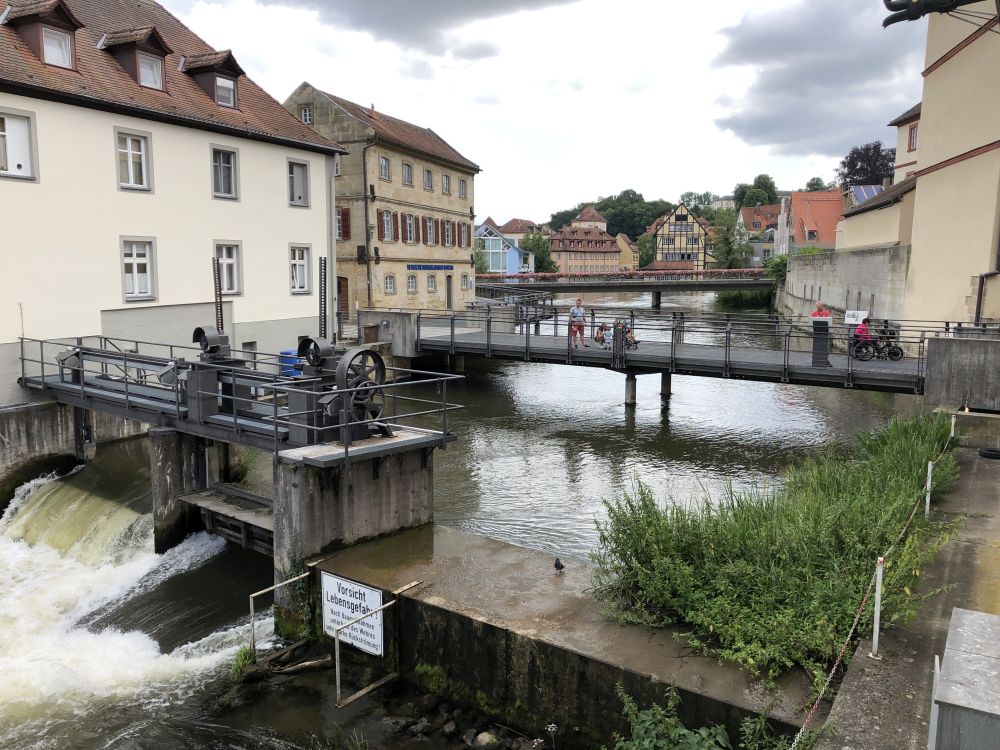 And it reminded me I left the village before exploring what this really was.

The Rhine-Danube canal flows through the city of Bamberg, and the Rhine-Danube canal has plenty of locks. But this is not one of them, and I am not sure why they need to regulate the flow of the river here. It doesn’t look like the water is used for any purposes, such as an historic mill or modern power generation.

It’s on my to-do list to come back one day and figure this out!

Bamberg in Germany’s Franconia region is an amazing UNESCO village.  The centerpiece is a stunning building that straddles the river – and although it’s not usual to find churches and cathedrals this old, in fact the Altes Rathaus dates back to the fifteenth century, which is quite amazing for a building.

Here is one view: 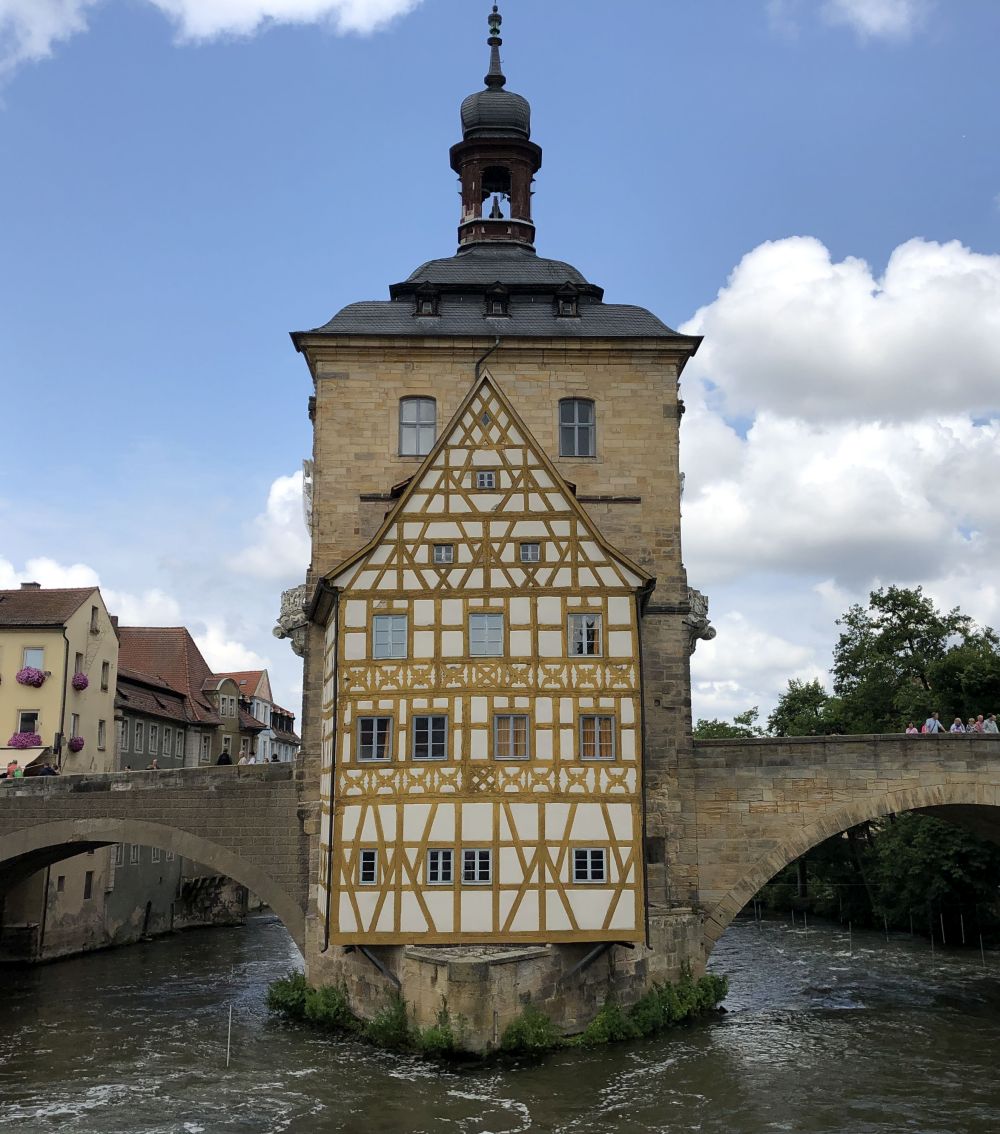 And here is the much more impressive view: 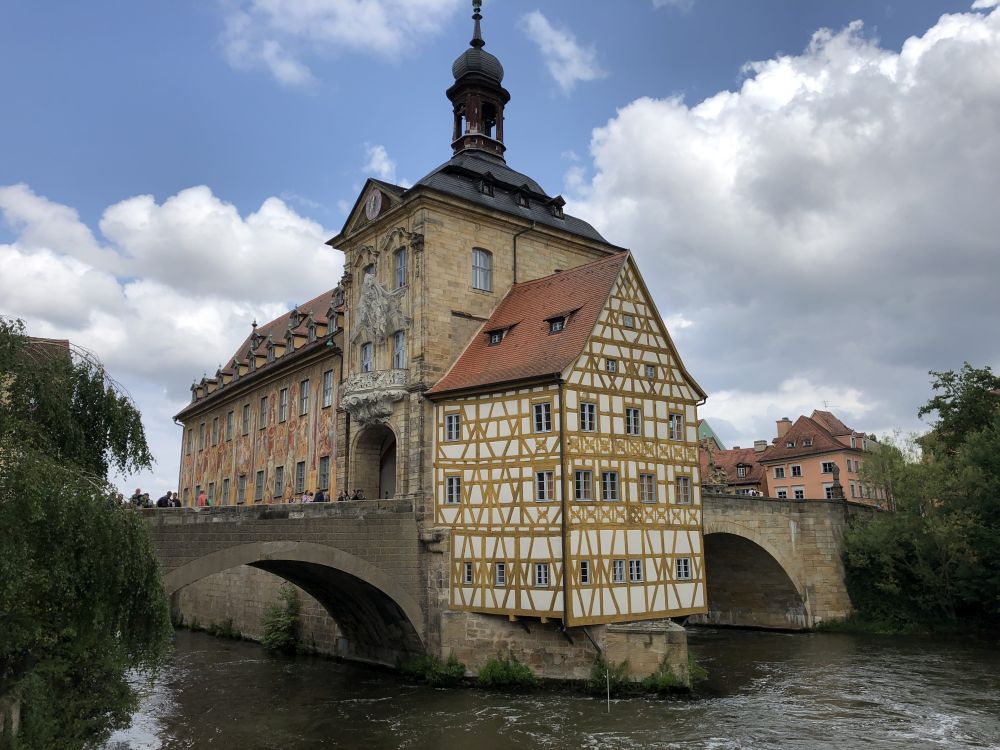 And here is the final view, showing the stunning painted facade: 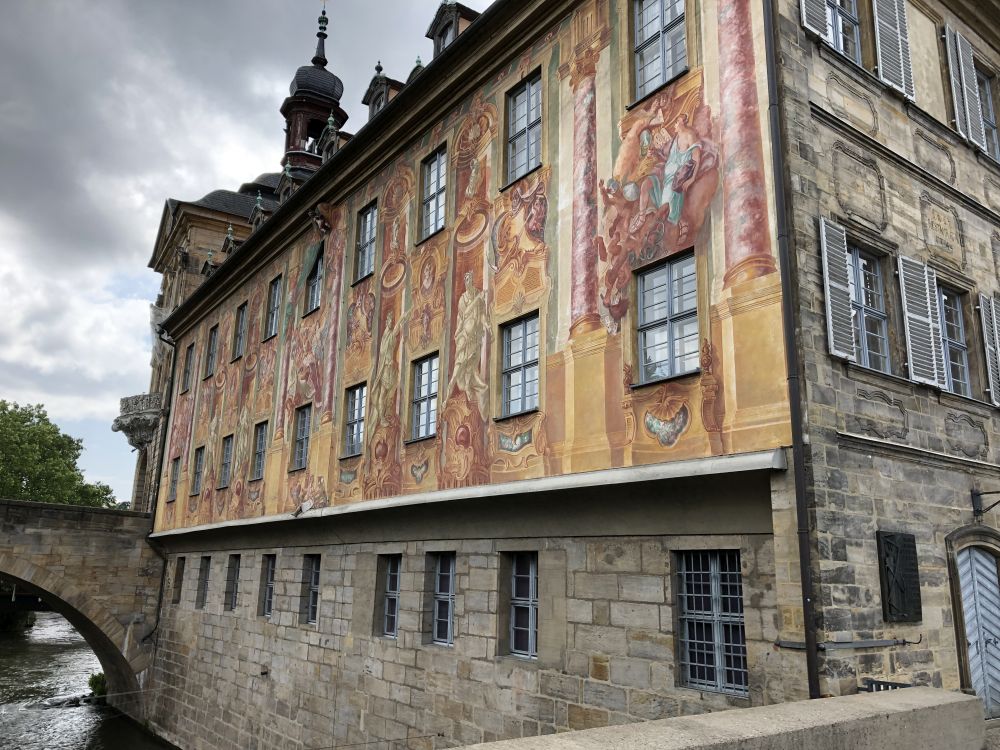 An historian once told me that painted buildings like this only came into fashion in the eighteen century in Europe, when the paint technology was sufficiently advanced to allow them to do this.

On a recent trip to the Franconian village of Bamberg I stumbled across this while on a long hike in the woods: 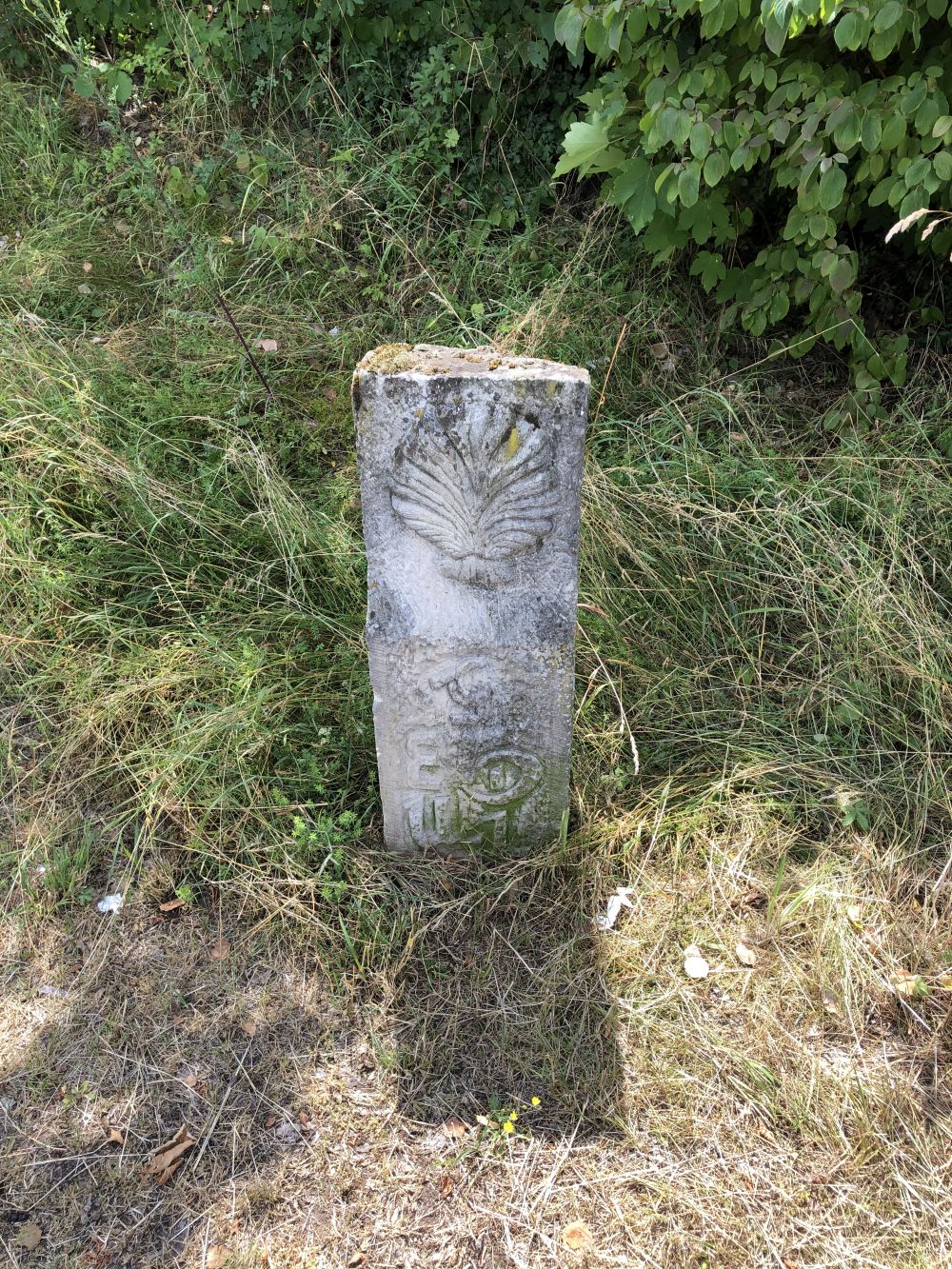 An old and often historically old marker like this, with a shell, symbolizes that you are on the world famous but “Ken disappointing” religious pilgrimage route, dating back to the early Middle Ages and leading to a cathedral in Galicia, Spain.

It made my day!  I try to hike sections of Jakobsweg whenever I get the chance, and in fact a short segment passes through Winterthur in Switzerland and is often a part of my 15 km daily Nordic walk. So I was quite thrilled to find this very unexpected branch of the trail!

Well, I was not surprised when my eyes sometimes later caught this fountain in downtown Bamberg, also adorned with a shell: 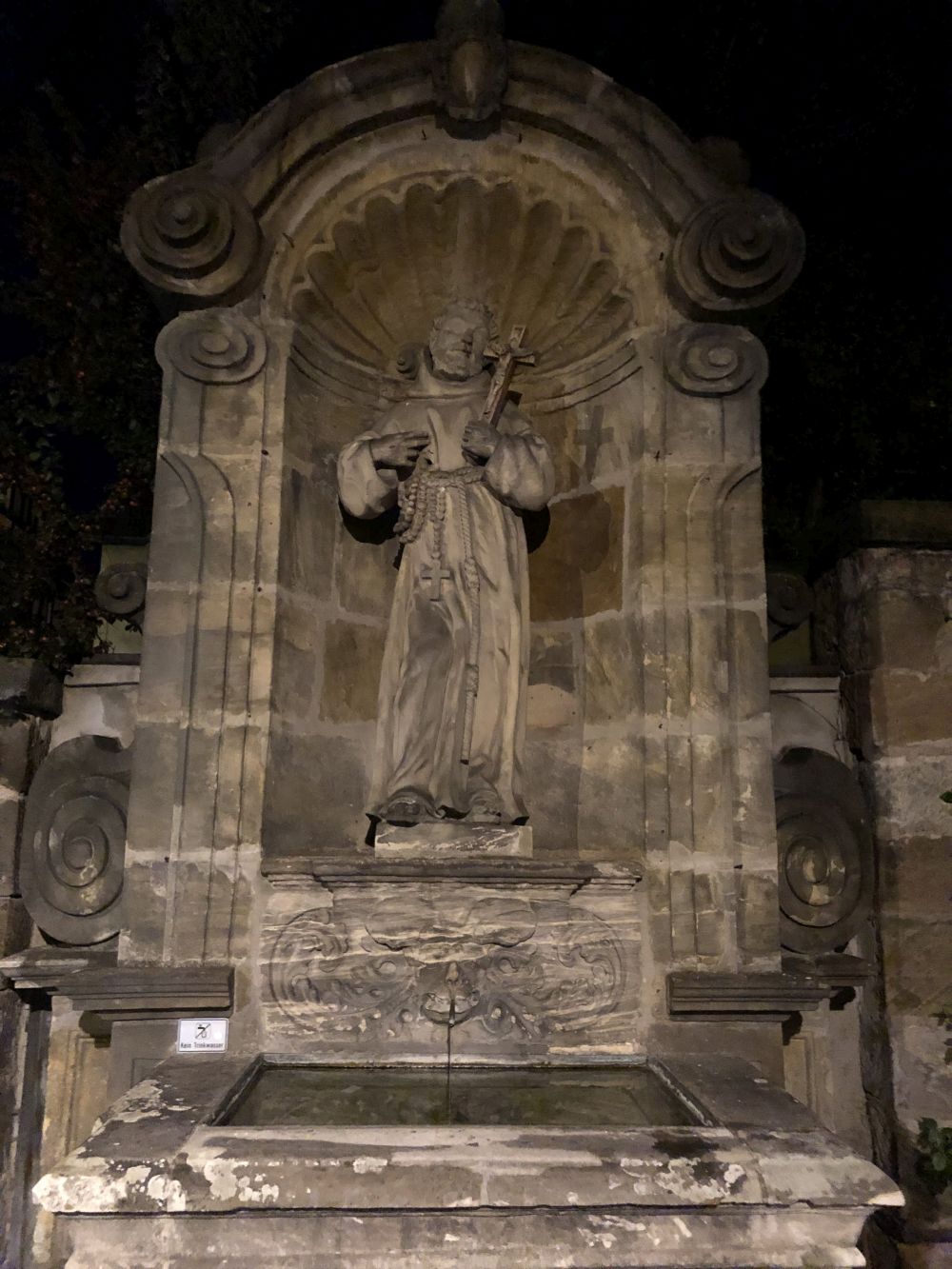 Don’t get me long – I love hiking the Jakobsweg, as countless people have been on these very same trails dating back many hundreds of years. But I say “Ken disappointing” because, after many years on my bucket list, I recently had the chance to visit the destination of the pilgrimage route, a cathedral in the Galician city of Santiago de Compostela – and I was thoroughly disappointed.

It’s on my bucket list to do a bit more research here. Did Santiago himself pass through Bamberg at some point? 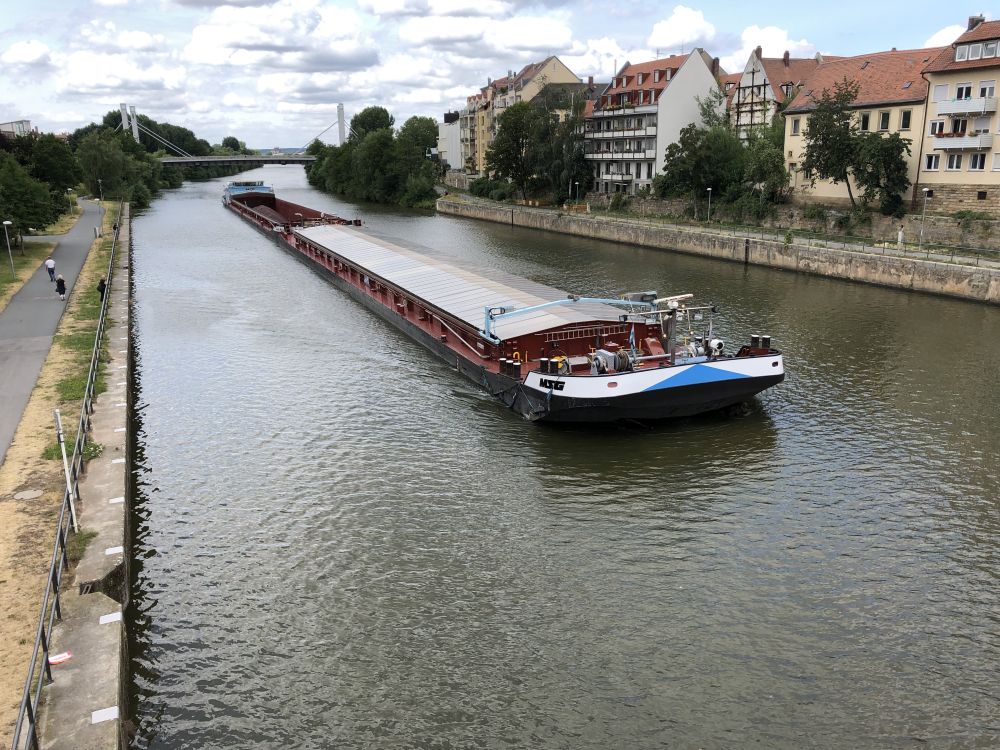 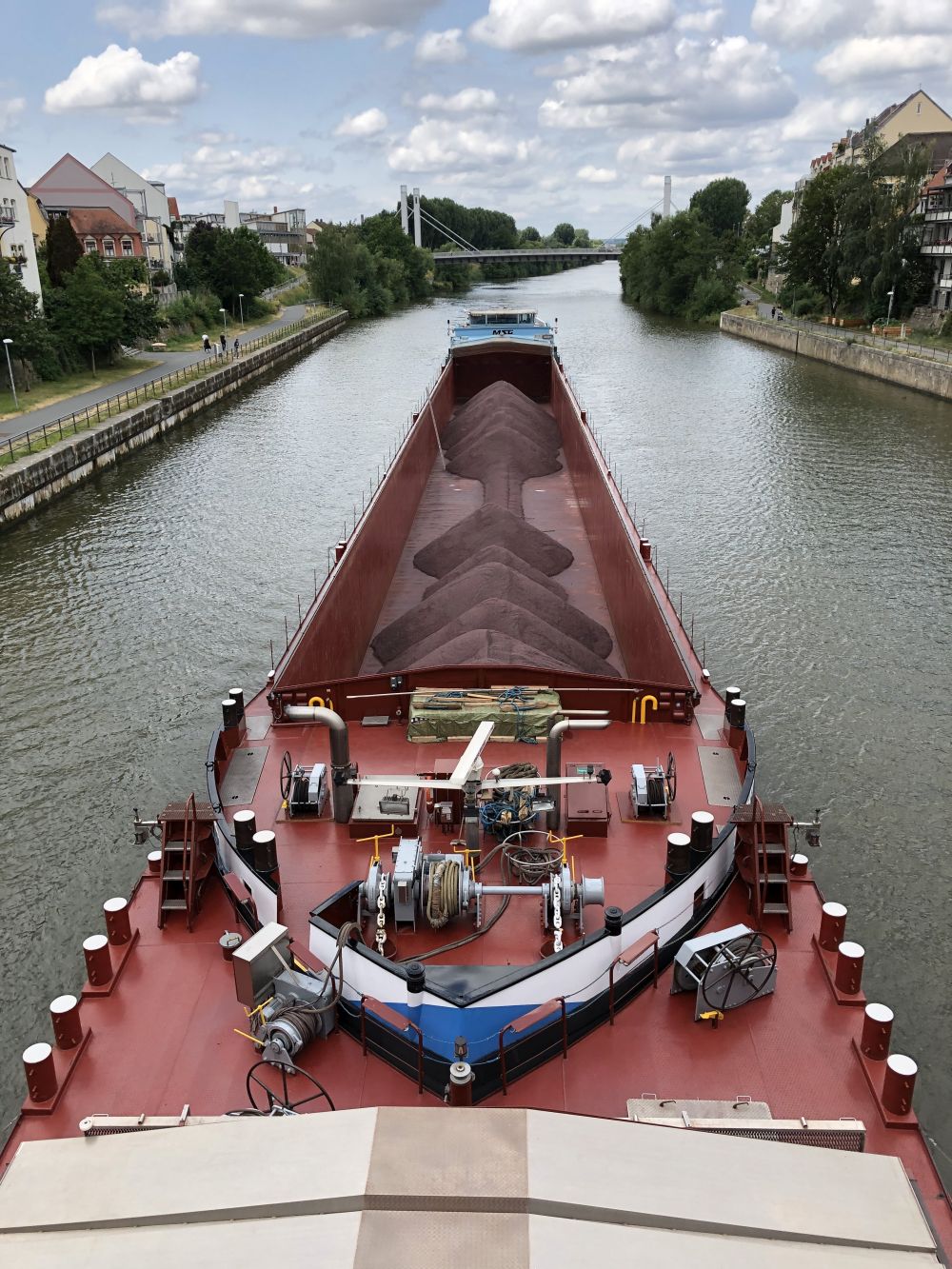 I’ve lived in Germany and Europe for a long time, but I never stop learning new things.

While driving aimlessly around the German countryside near Bamberg I was attracted to cathedral I spotted from a distance, nestled in a sleepy farming village of very few inhabitants but very many tractors: 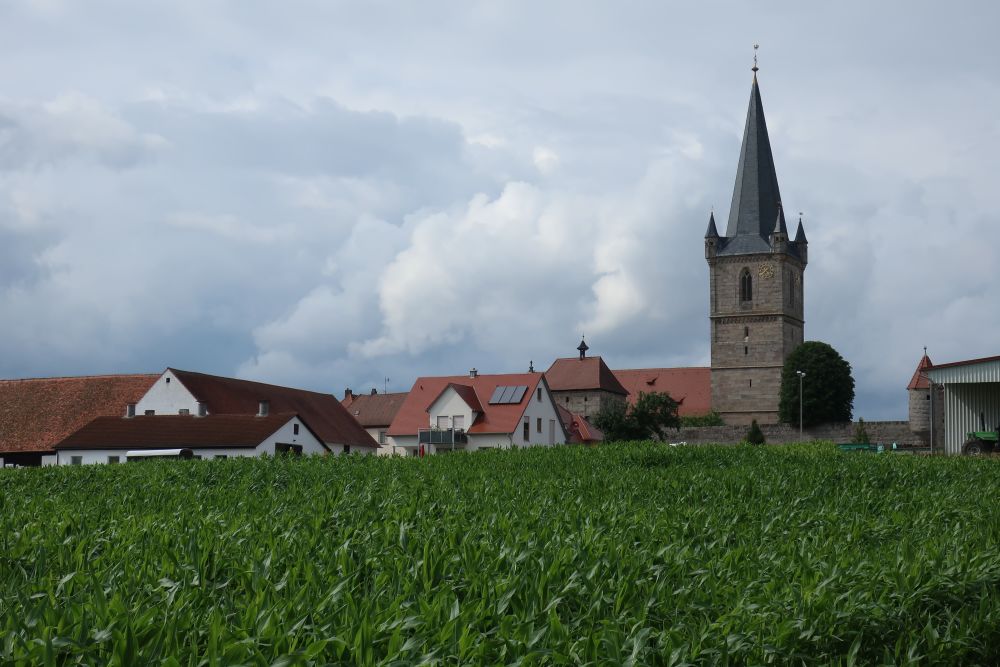 It turns out this is no ordinary cathedral, but rather a magnificient example of something I had never heard about before, a Kirchenburg – roughly translated as “church fortress.”

You can certainly see it has a church: 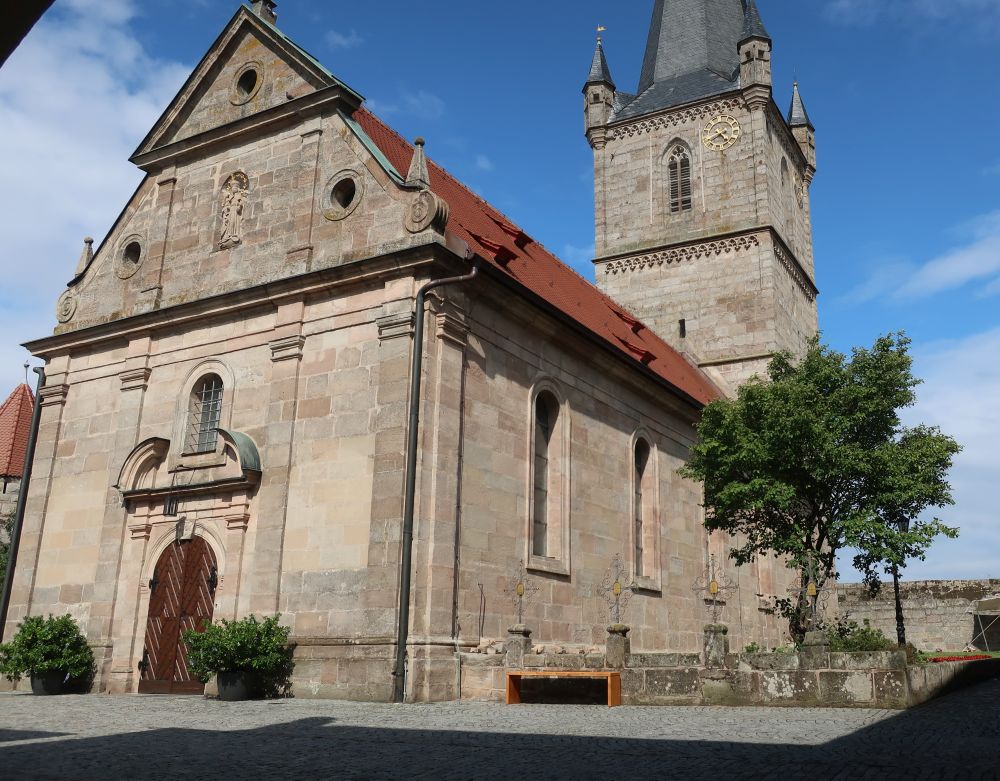 But as you walk around, you see it is indeed a church squarely within a fortress: 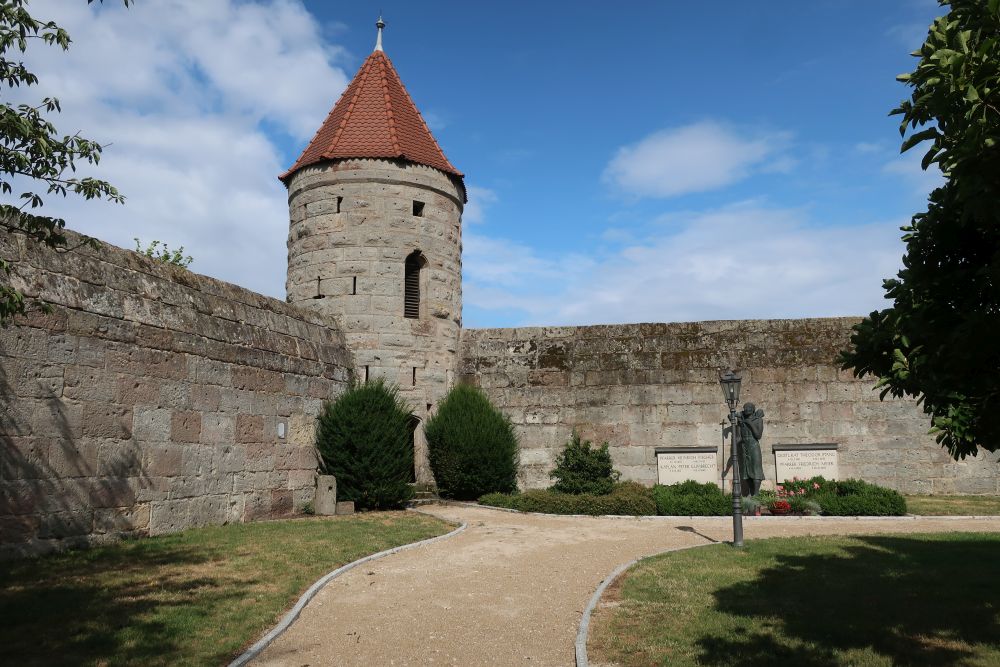 And not only that, but it turns out this is the third largest such Kirchenberg in Germany! 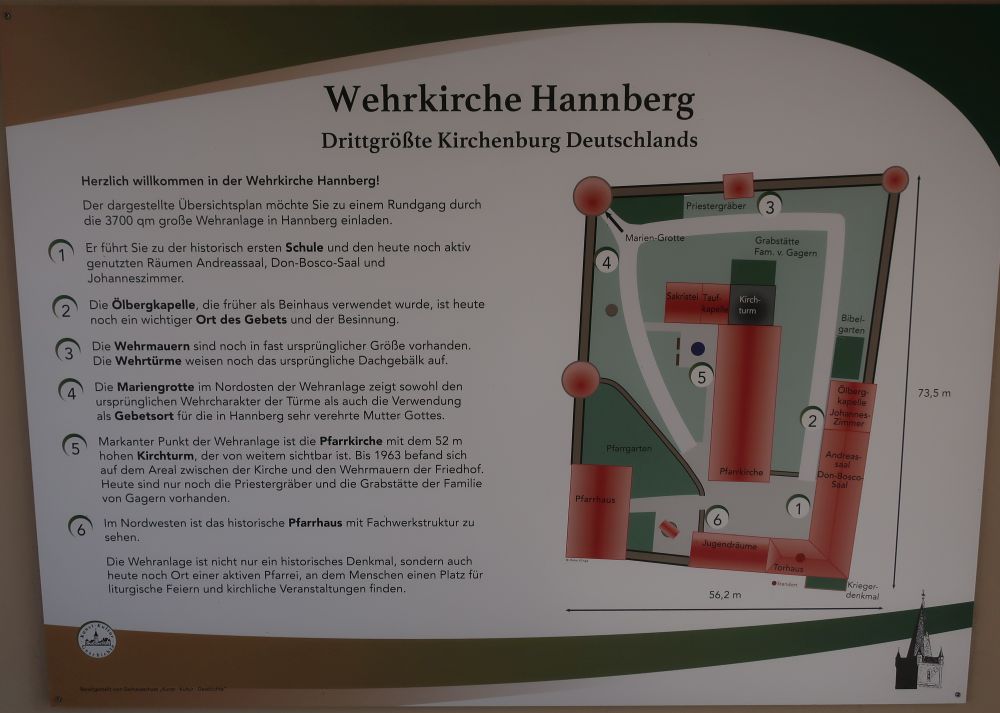