This is a snap of my 1990 Ford Ranger pickup truck, that didn’t actually need a name because I thought “The Truck” was name enough. It was the second vehicle that ever entered my personal fleet, way back in 1991, following a 1981 Chevy Chevette that was a terrific first car for me but I had to junk due to rust and general decay. 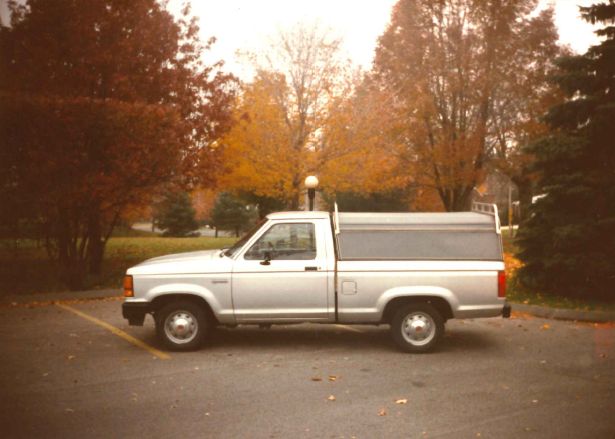 1) I bought the truck used for USD $2000 from the owner of a local music store in Champaign, it had around 5000 miles on it. This was back in the days when nobody really knew what a pickup truck was or wanted one. In the ensuring 8 years the popularity of these trucks exploded, and I told the truck in 1998 for USD $5500. So after 8 years I actually made a tidy profit that more than paid for my repairs, insurance, and upkeep during those 8 years!

2) This was before I got shot at. While driving in Kentucky someone tried to shoot me with a 22-caliber rifle. Thankfully it missed me, but it left a nice little bullet hole directly next to the gas flap that you can see in the shot above. 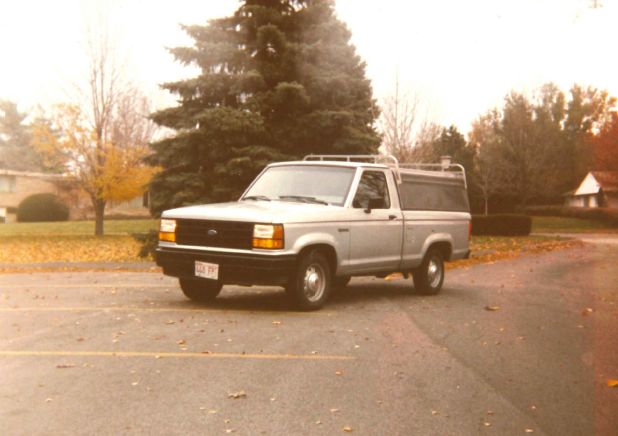 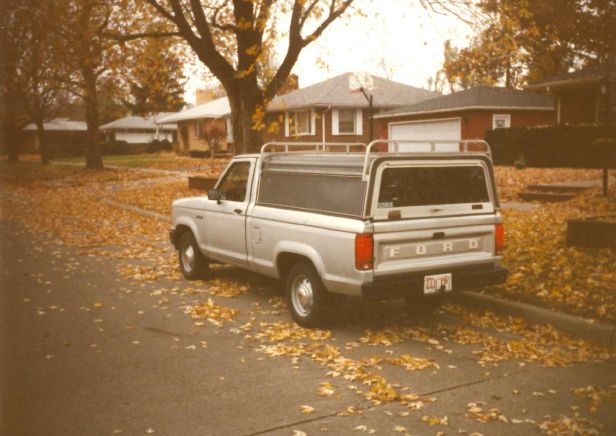 3) All Ford Ranger trucks are known for their short engine lives, usually the engine dies at around 150’000 mi. In my case at very nearly 150’000 I had a head valve crack, which is an interesting story: I took the truck to a number of supposedly “good” repair garages, nearly all of them told me I had a cracked block.  Now, nobody is pulling the wool over my eyes – I know the difference between a cracked valve and a cracked block!  So . . . when you need a good repair in the US, where do you take your car? Easy: to the least affluent part of town.  Which I did. Repair job took around 6-7 hours, but I only paid around USD 500 for the repair.  Reason: people who live in the poorer areas don’t have a lot of money, so the garages in these places need to offer a top service at a low price in order to win any business.

Continuing the series, I’m trying now to document all the vehicles that are now or ever have been in my personal fleet, so with this publication of my 1981 Chevy Chevette that I bought used in 1988 for USD $1200, the list is almost complete. The photograph was taken one winter at the Brookhaven National Laboratory on Long Island, just across the street from the nuclear waste dump – I hoped that extra little boost of radiation would help enhance my photograph: 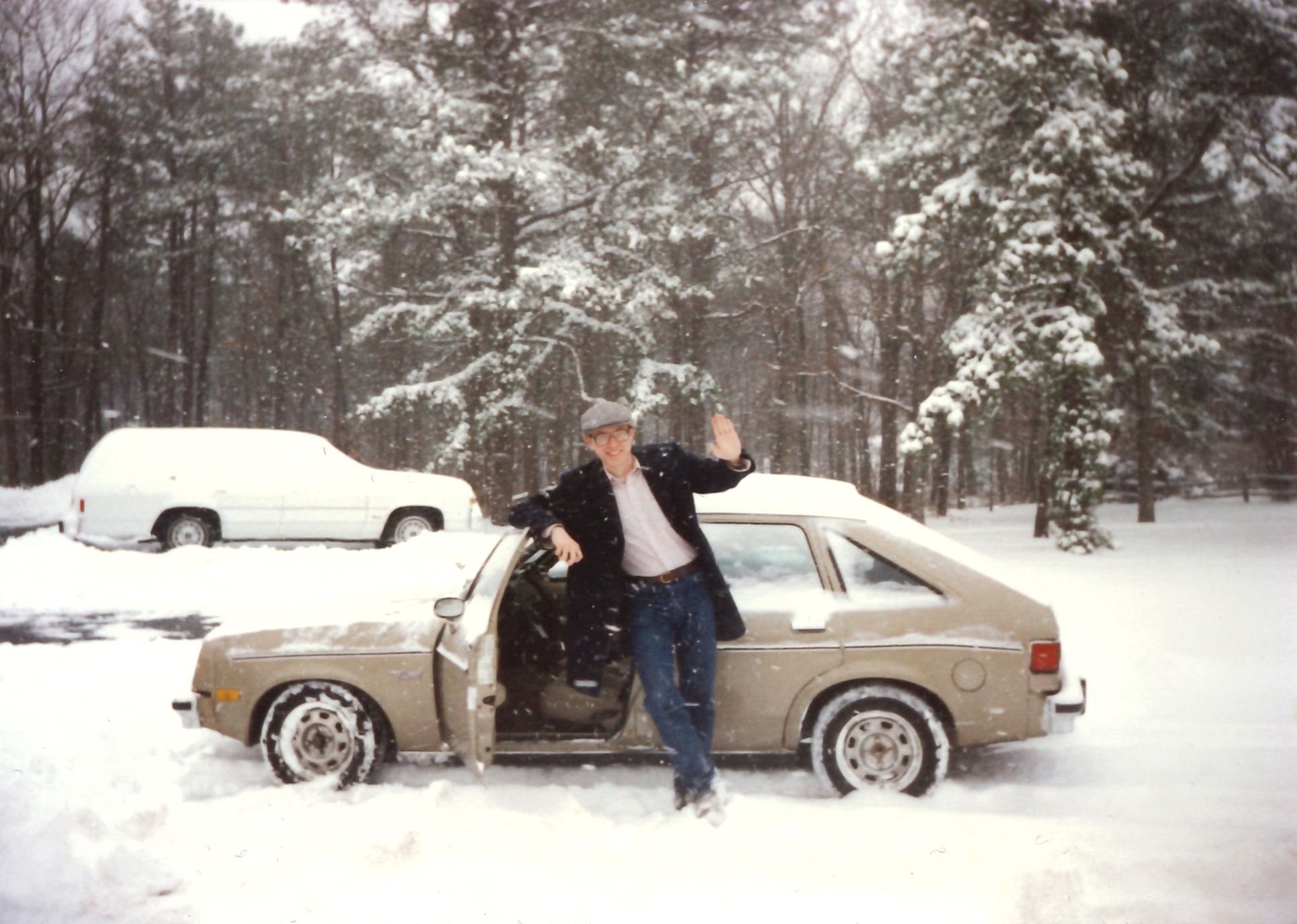 This was before I started naming my vehicles, but it was a trusty workhorse for me for my jaunts around New York and the East Coast, from 1988 until I junked it in 1991.  Cars in New England don’t lead long lives, for obvious reasons that you can see here.

Continuing the series, I’ve had this Honda 125cc scooter in my personal fleet for a few years now: 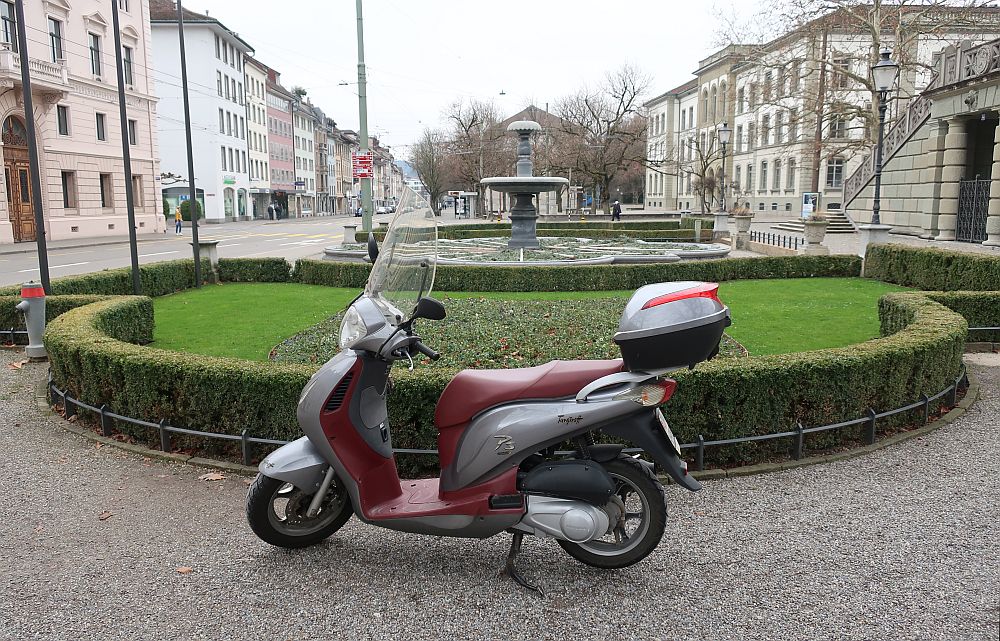 Continuing the series, here is the Rhine Rider just alongside a Roman canal in the southern French city of Nimes. 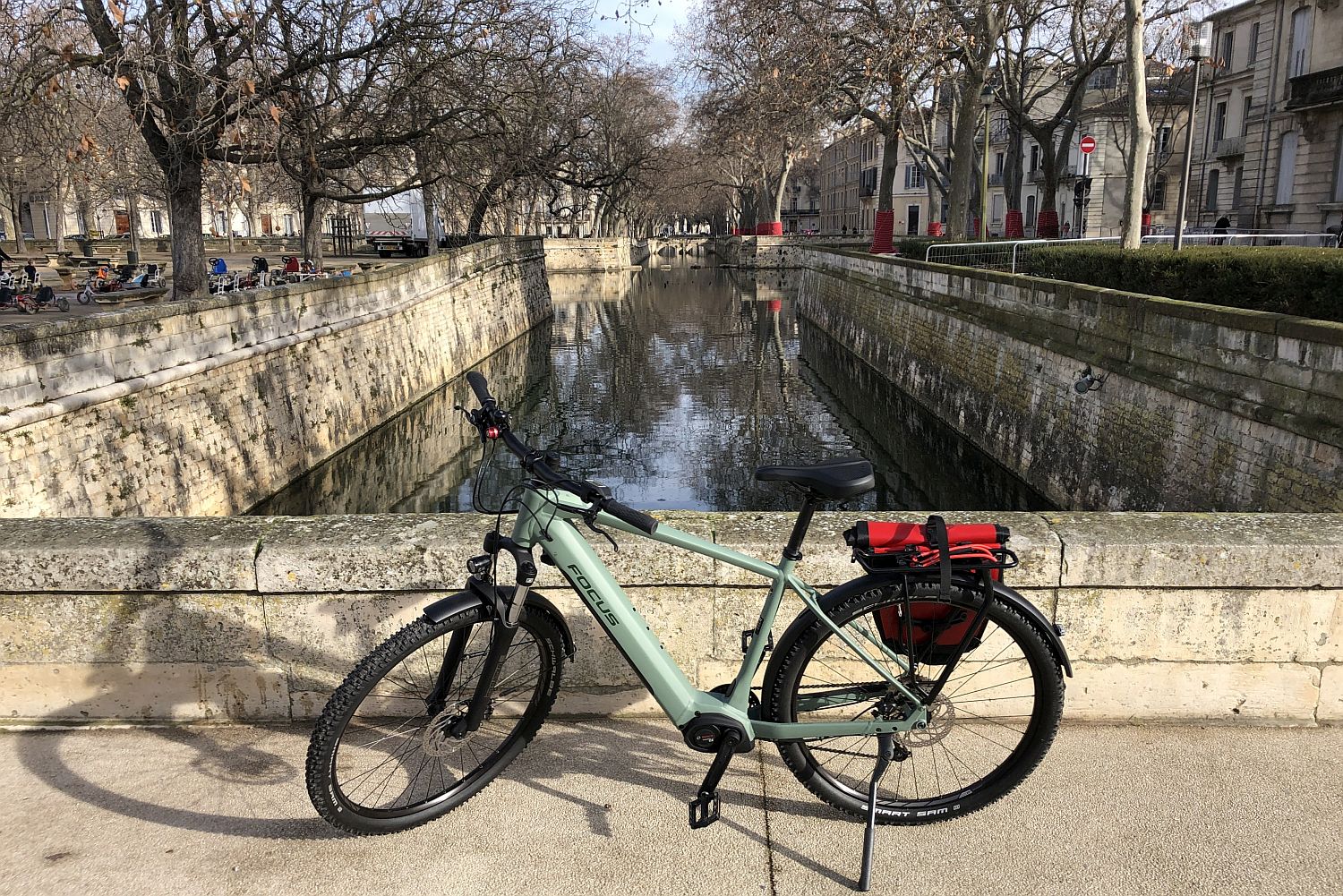 Continuing the series, here is a snap of the Rhine Rider in front of a statue of the famous French engineer Pierre-Paul Riquet, who built the famous Canal du Midi that connects the southwestern French city of Toulouse with the Mediterrean Sea. 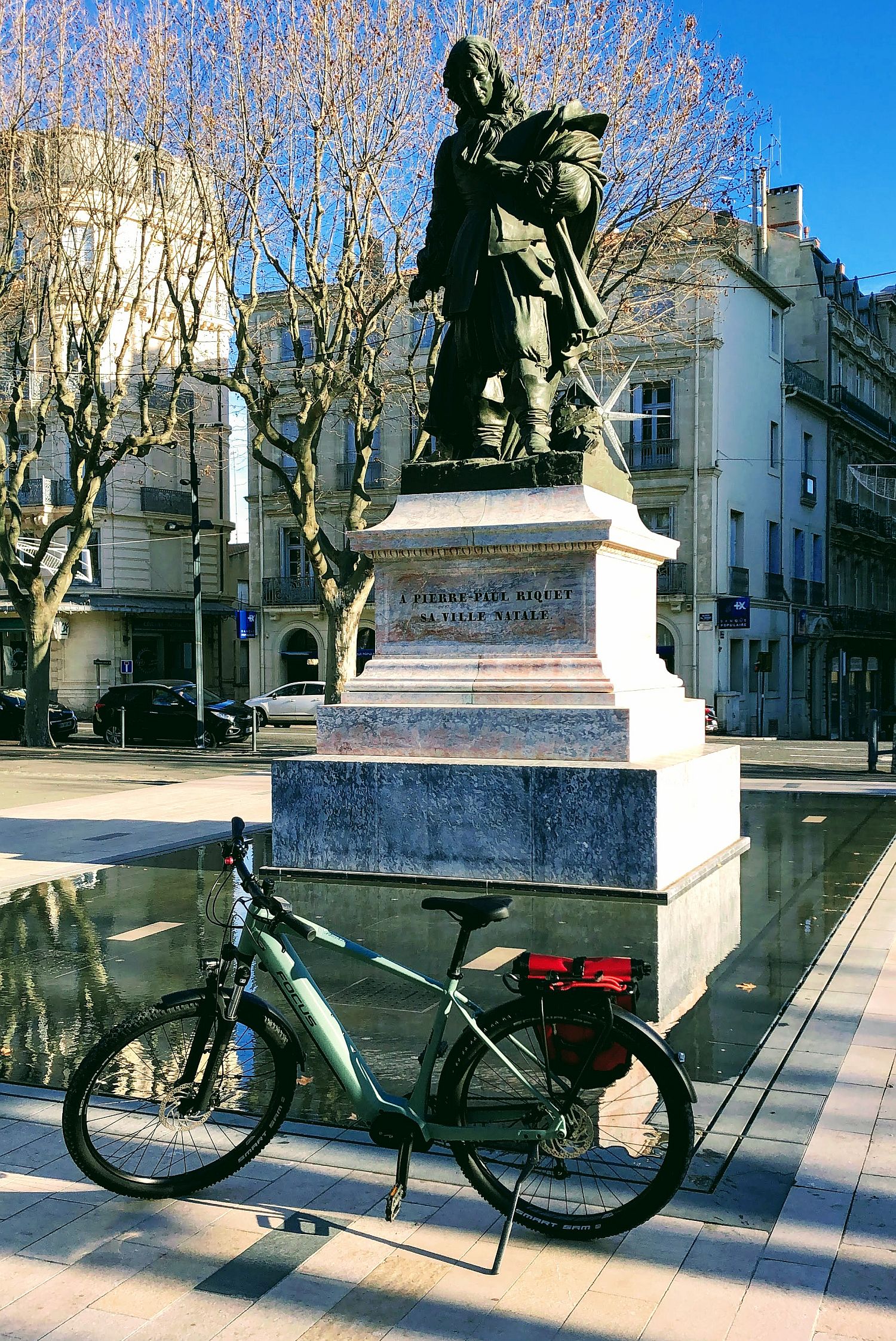 Continuing the series, here is the Rhine Rider in the Centre Ville of the southern French city of Béziers: 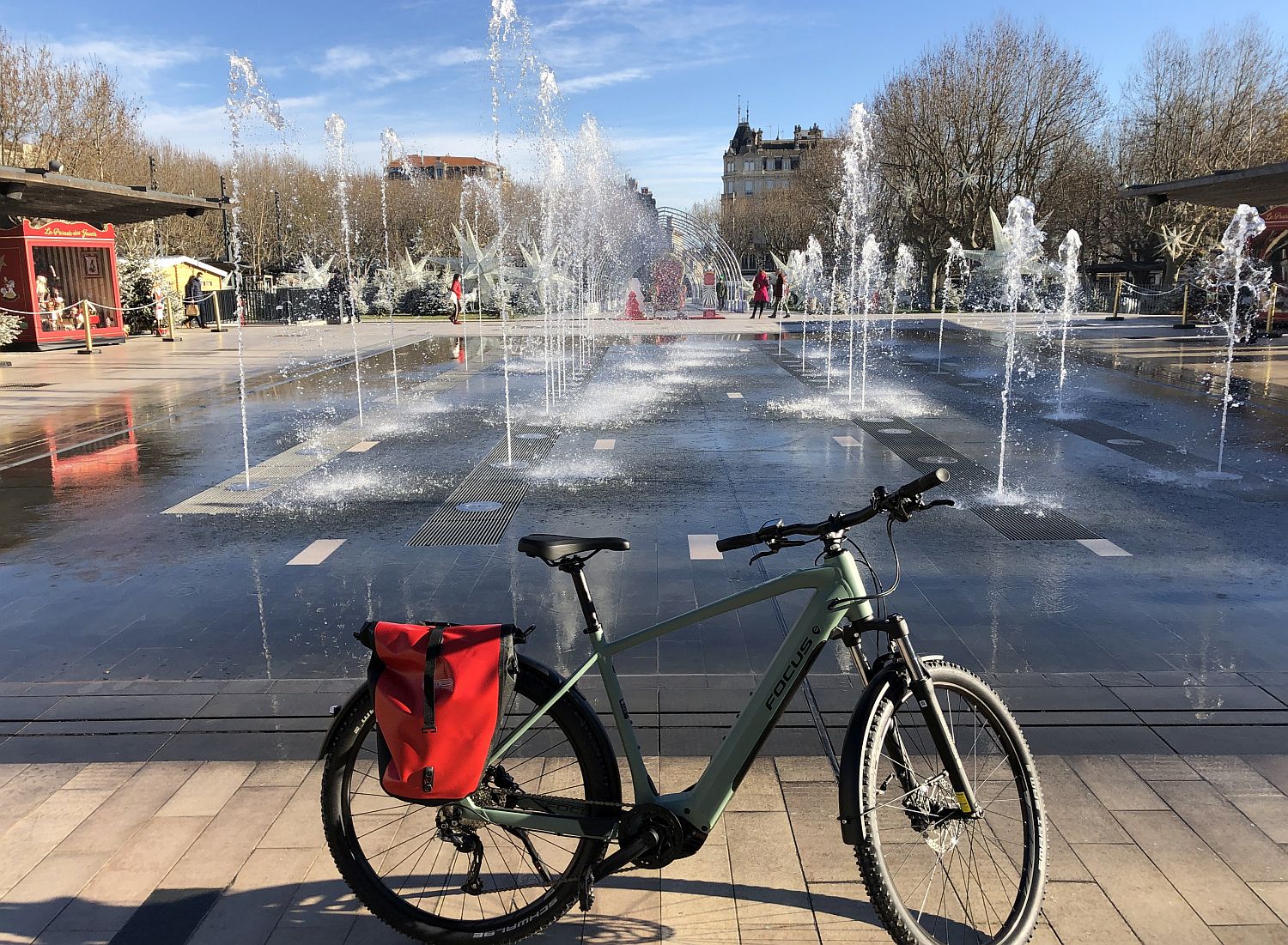 Interestingly the Centre Ville in Béziers is not the same thing as the Centre Historique, sometimes called the Vieux Ville.

Here is the Rhine Rider, taking a break at the top of a hill in the southern French city of Béziers, just in front of the Cathédral Saint-Nazaire, 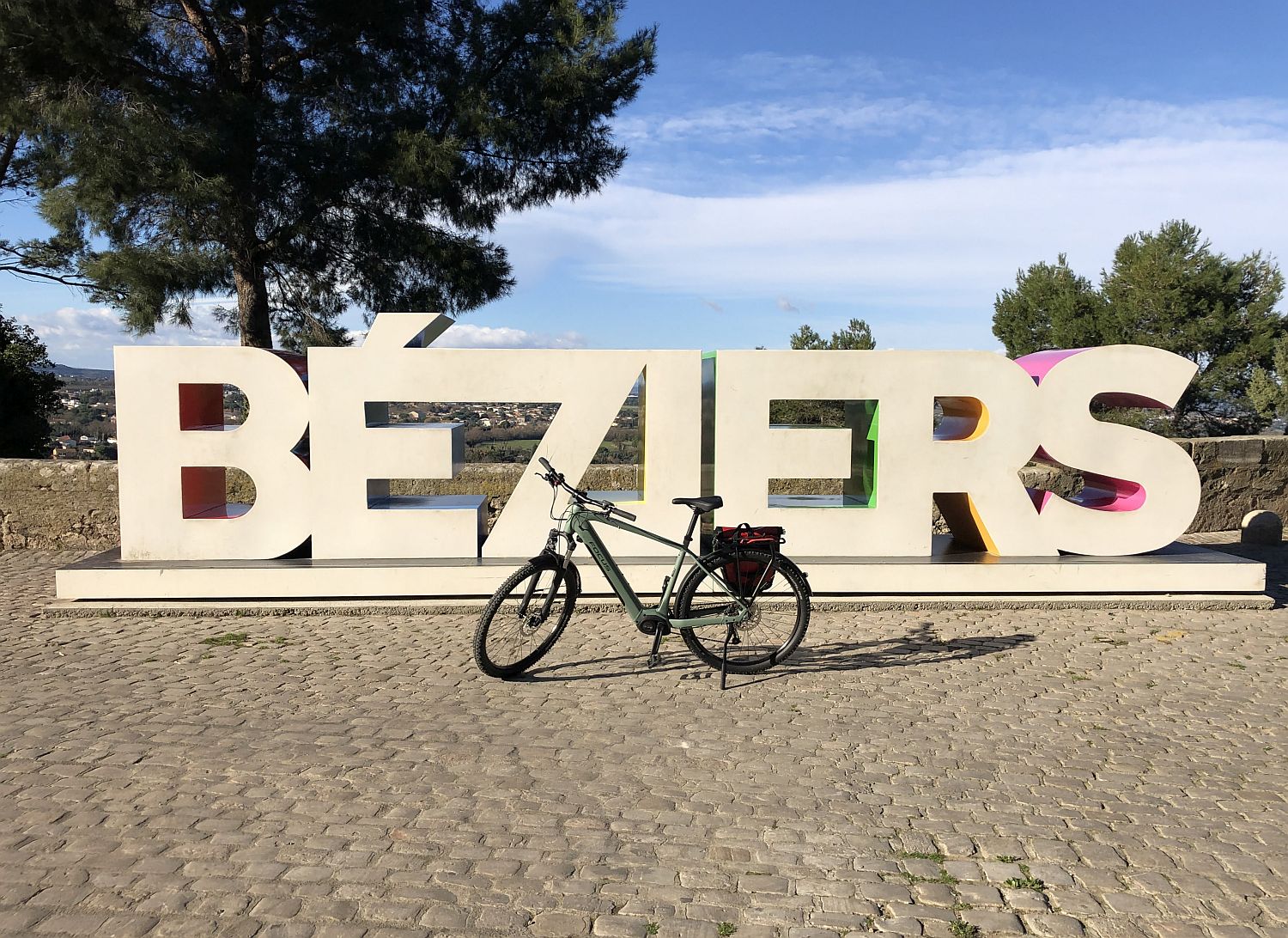 “Manuelito stood there waiting for the bike to charge as had all of the bulls in his career and all the bulls before that when he was young and he twitched the cape hoping to see some action so the crowd wouldn’t think him a coward since crowds judge matadors not only on their courage but on the courage of the bull but the bike had no courage and wouldn’t charge him and the crowd left one by one which is the worst insult to a matador until there was only Manuelito standing alone in the square and he knew he could have killed the bike had it but charged but it didn’t and he thought perhaps another day and another bike or another bull and I can redeem my honor.” 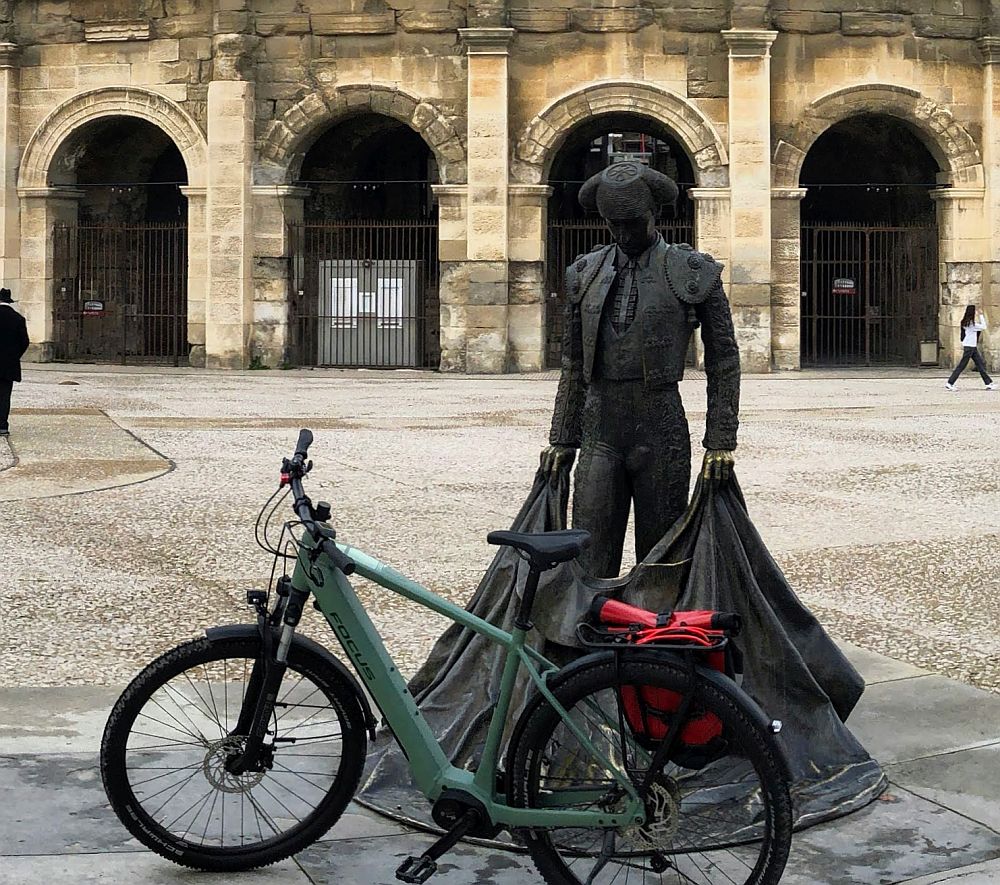 A snippet from the famous book by Ernest Hemingway: 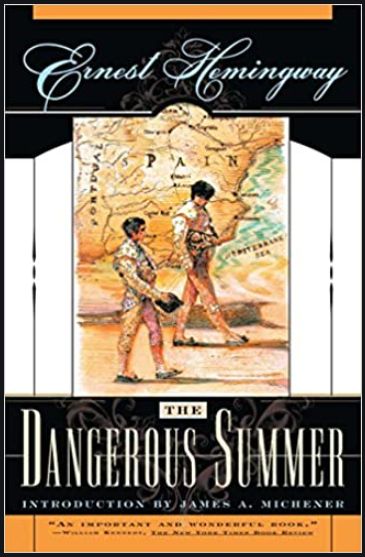 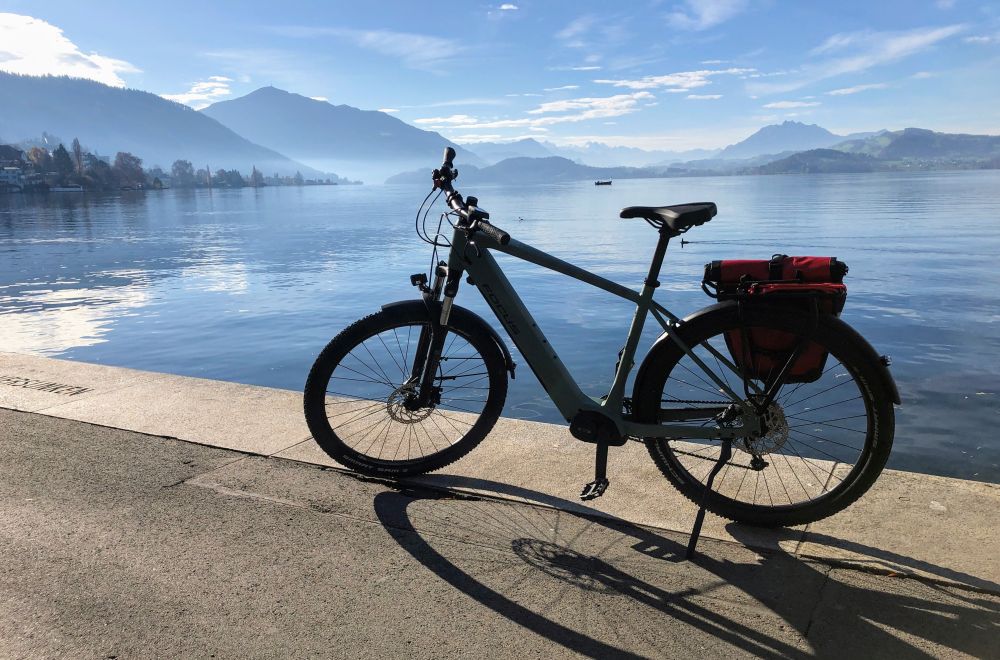 Since 1997 I’ve followed the tradition of naming my vehicles.

In 1997 while studying physics and living in Urbana, Illinois, I bought a 1983 Oldsmobile for USD $200 from a good friend of mine, Andrei Botschkarov, at the time one of the top semi-conductor physicists in the world. (He was not personally a semi-conductor, but rather he did research on them). Anyway, it had a maximum speed of 40 mph, it turned itself off after 20 minutes, and the tires were so flat that the steel was mostly worn away. That car was classy – and there was no other approach than to give it a classy name: Urbana Cruiser. Sadly, I don’t have any photos.

There followed the Eiger Chopper, the Zurich Cruiser, the Euro Cruiser, and now the latest addition to my personal fleet: the Rhine Rider: 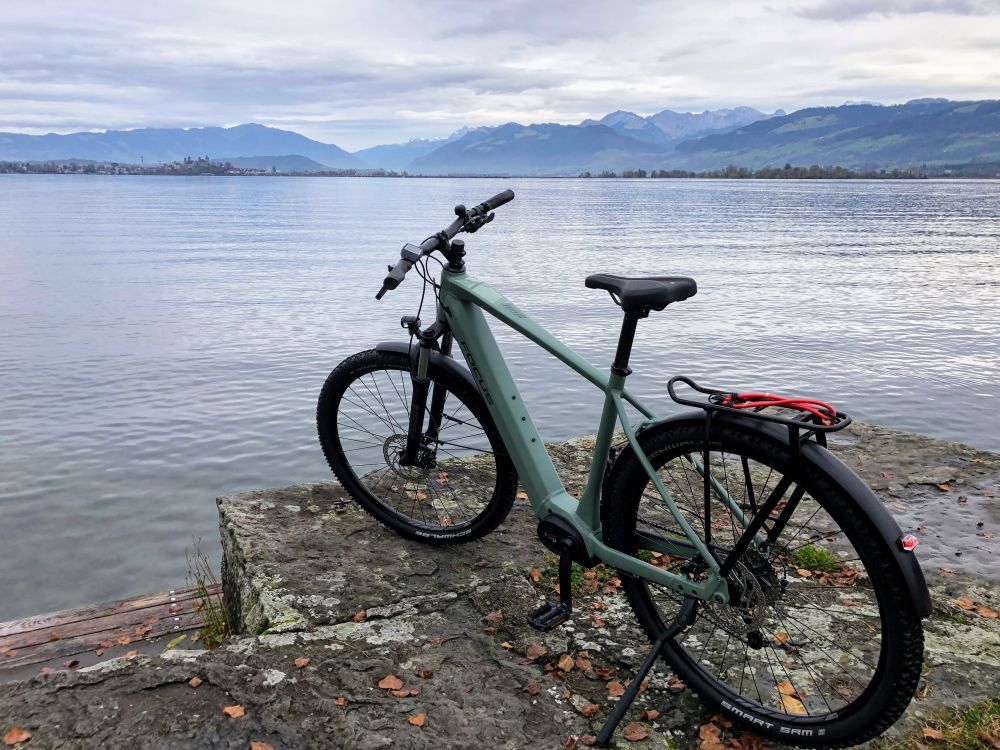 No, that’s not the Rhine. That’s Lake Zürich, also known as Zürisee.

Now, here they both are, together! 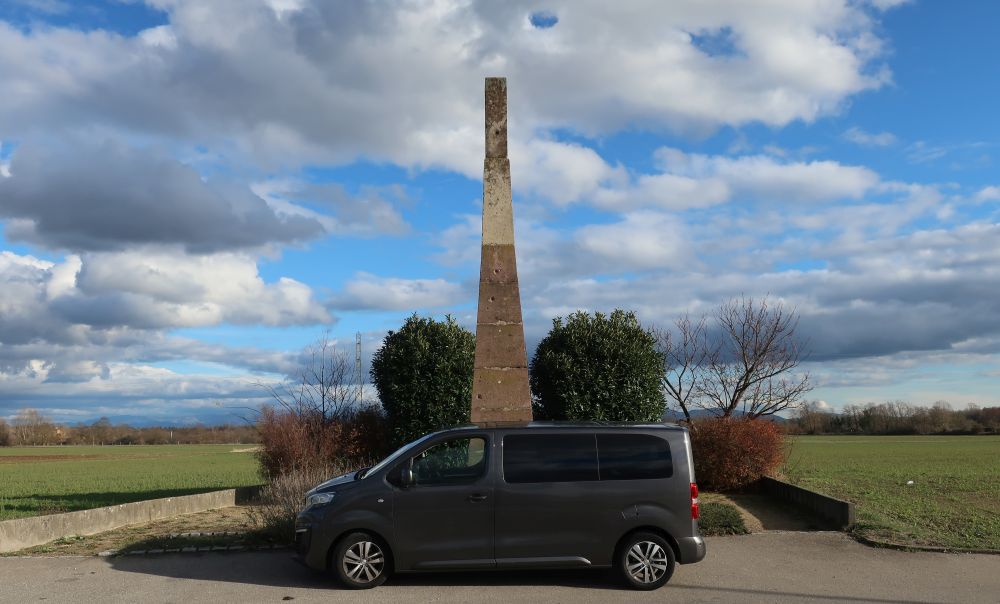 The latest addition to my personal fleet is a 150 PS, 2.0L 2017 Peugeot Business Traveller van that comfortably seats 9 people: 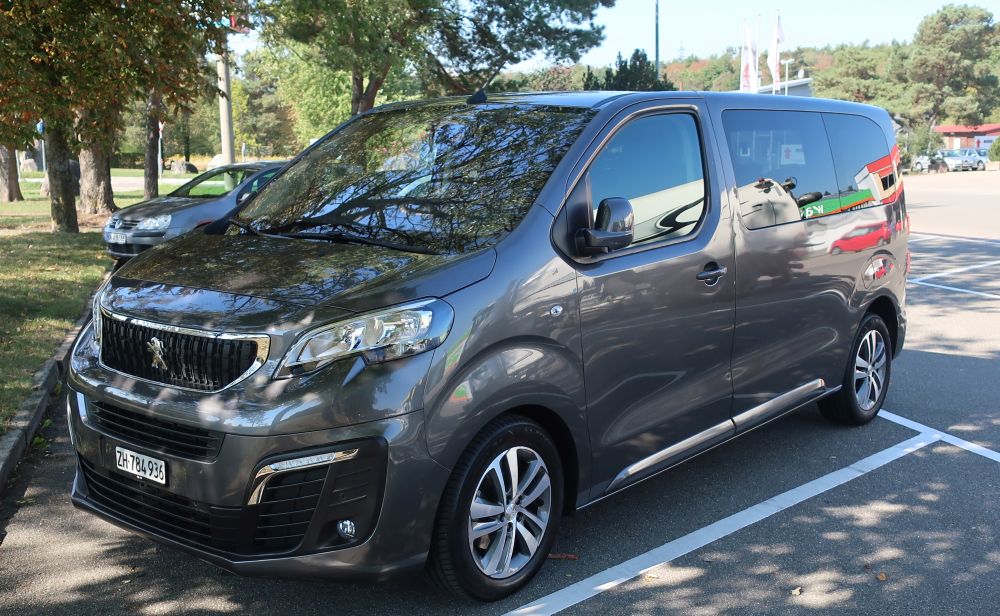 The main way to interact with this vehicle seems to be the voice system, so I am in the process of learning dozens of voice activated commands.

By the way, it all began with the Urbana Cruiser, 20-year-old 1978 Oldsmobile that I bought in 1998 for $200 from a good friend of mine, Andrei Botchkarev, one of the world’s most well-known semiconductor physicists.  It was too cool to resist giving it a name.

The tradition continued with the Zürich Cruiser. 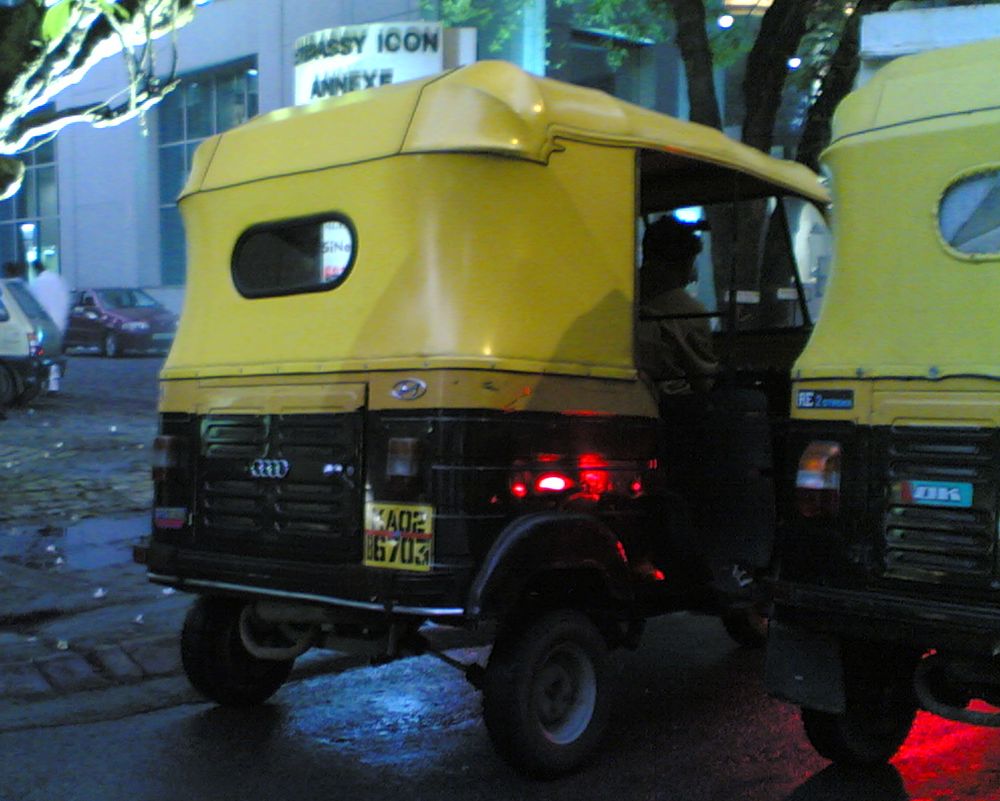 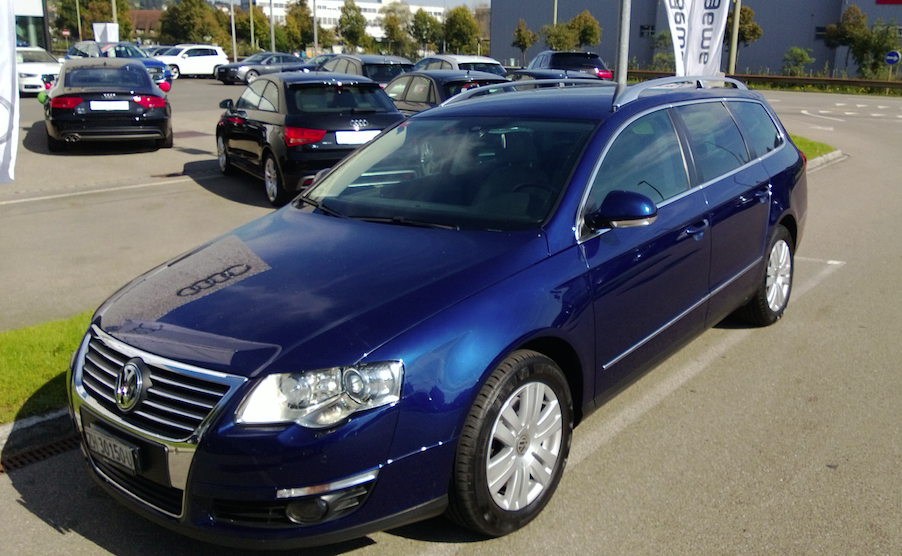 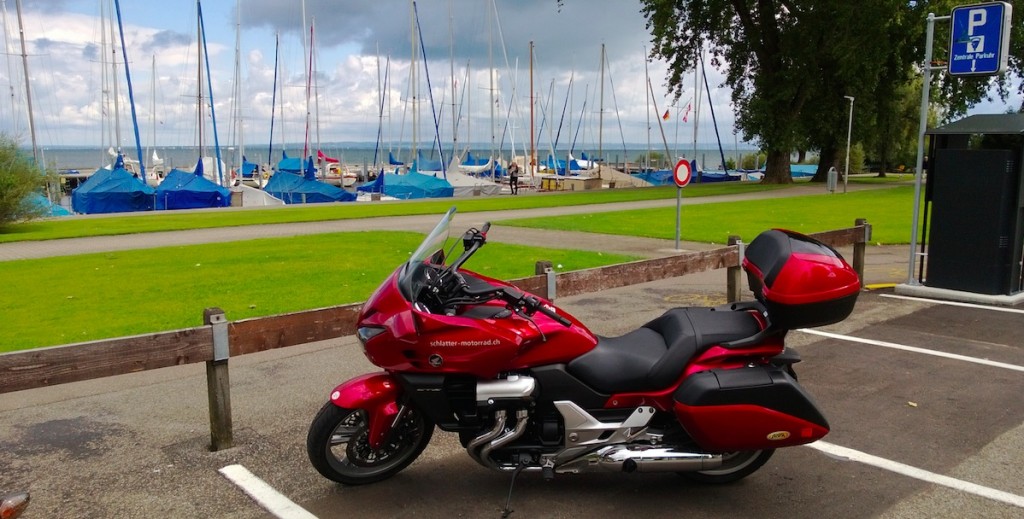 The search for an upgrade for the Eiger Chopper continues.  I spent about 500 km on a Honda CTX1300A this weekend – here it is shown parked on the south shore of the Bodensee, also known as Lake Constance, between Germany and Switzerland.

I couldn’t go wrong with this one, but I’m still looking. 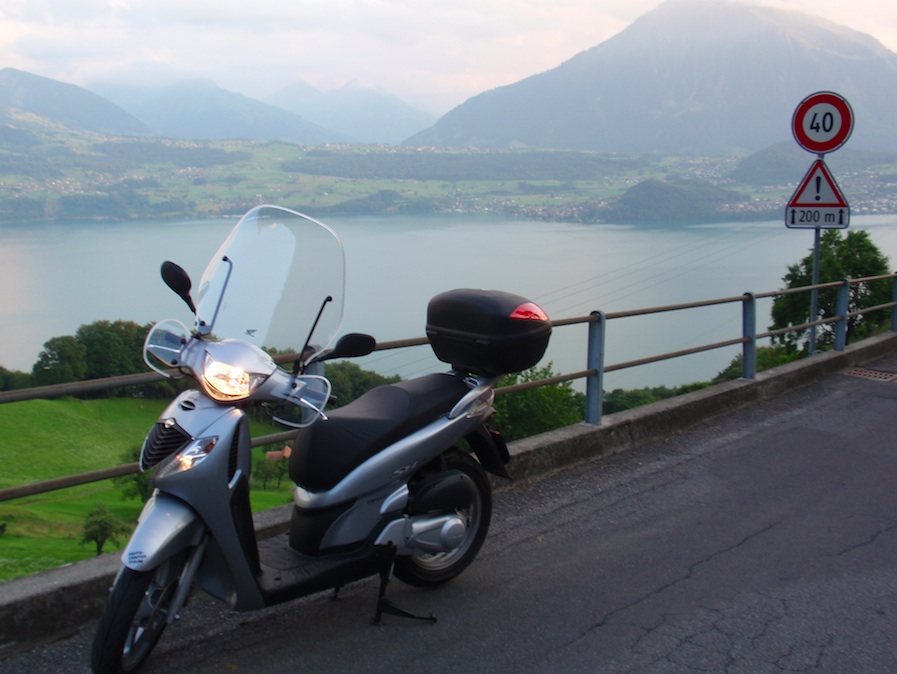 I call her the Eiger Chopper, for obvious reasons (that’s the Swiss Berner Oberland in the background).  She’s 5 years old, and she has 27,000 km. She’s been a trusty commuter workhorse for me – as well as a wonderful way to explore the Swiss countryside.  But I am starting to itch for something a little bigger.