This is a snap looking up at the Petronas Towers buildings in Kuala Lumpur, Malaysia:

They are nice towers, to be sure. And underneath the towers is a very nice indoor shopping center filled with many fabulous restaurants.

But for a long time Malaysia has tried to portray these towers as one of the world’s tallest. This is far from a true statement, as anyone with experience with tall towers knows just after standing under them and looking up.

This is the Teman Negara, which I visited during a trip to Malaysia: 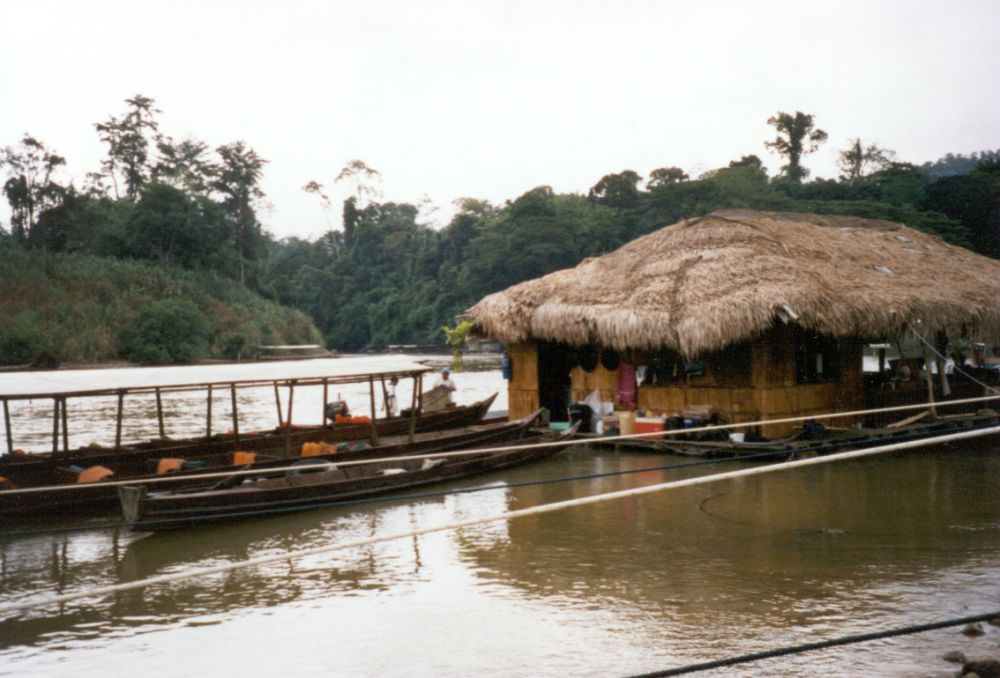 And this is an Anopheles mosquito. Not the one that BIT me, despite my efforts to keep myself smeared with a powerful mosquito repellant, but one just like the one I caught sucking the blood in broad daylight from my hand: 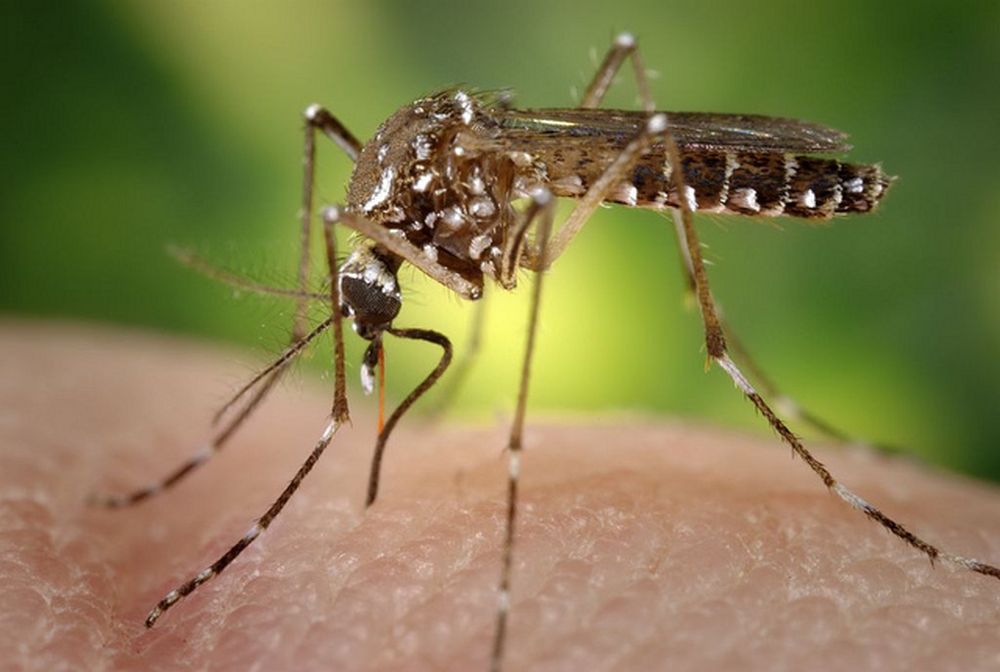 Now here comes the mystery. About a month after returning from my vacation, at around 12.30 PM in the afternoon and while at work, I quite suddenly felt like I was going to get the flu: my body became weak, and I could feel my temperature was rising. I went home.

About one hour later, I was in bed with a high fever and chills.  My fever was higher, my weakness was weaker, and my chills were chillier than anything I have ever experienced, either before then or since.

Now, I’m not totally stupid – I know that because I spent time trekking in an area with malaria, and there could be a chance that I could get a delayed infection, so I decided to closely monitor my temperature: if it started to rise or get worse, I’d go to the hospital immediately.

After almost two days the temperature went down almost as quickly as it originally climbed, and the chills and the weakness disappeared.

It’s a mystery because I guess I will never know!

A sudden jungle downpour, deep within the Teman Negara rainforest of peninsular Malaysia: 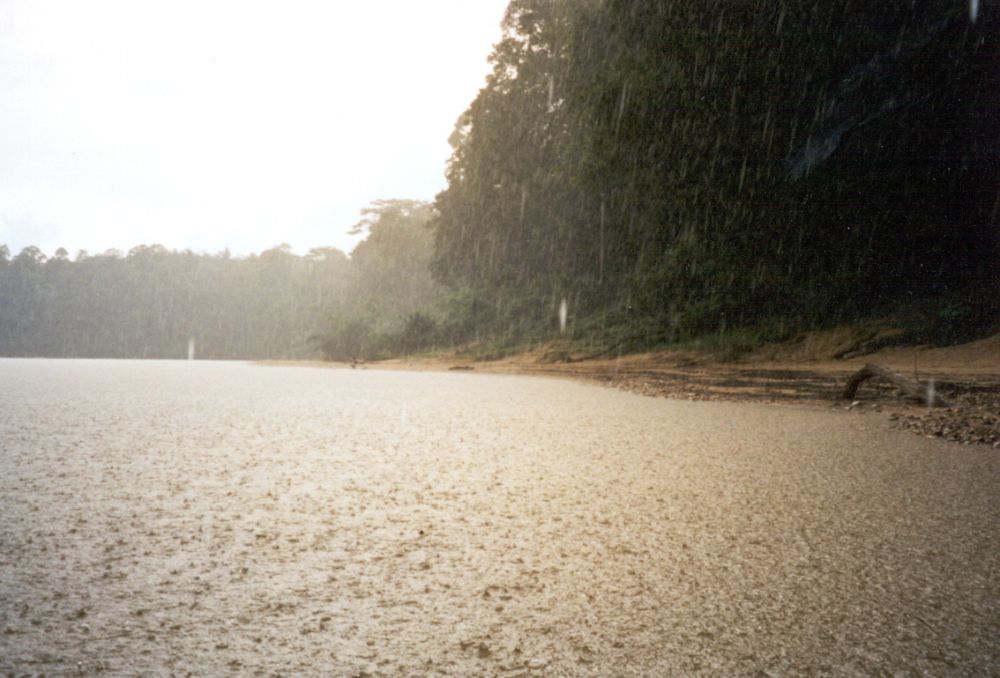 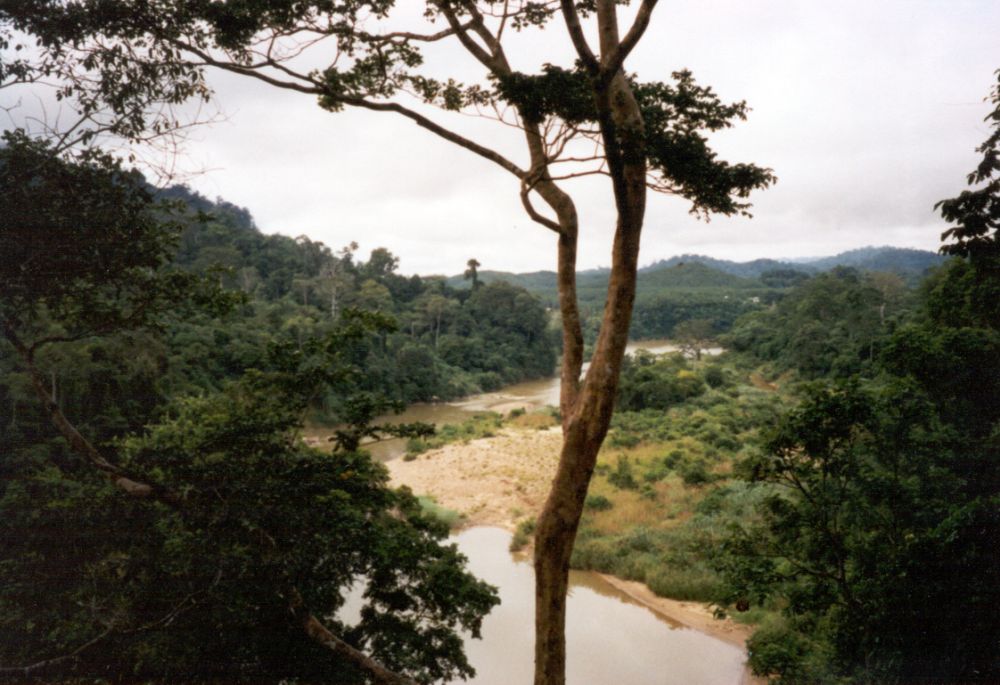 Unfortunately, I can’t actually show you Jungle Mystery Two – and that’s why it remains a mystery. While visiting the jungle, I got up quite early and took a walk. Two Chinese people were also walking, but they couldn’t speak English and I can’t speak Chinese, so we walked together in silence.

When we came to a jungle clearing, we saw two orange orangutans (looked like a mother and a smaller child) dangling from long vines.  Naturally I took many pictures – and so did my Chinese companions. Here is a picture of an orangutan I found on the Internet: 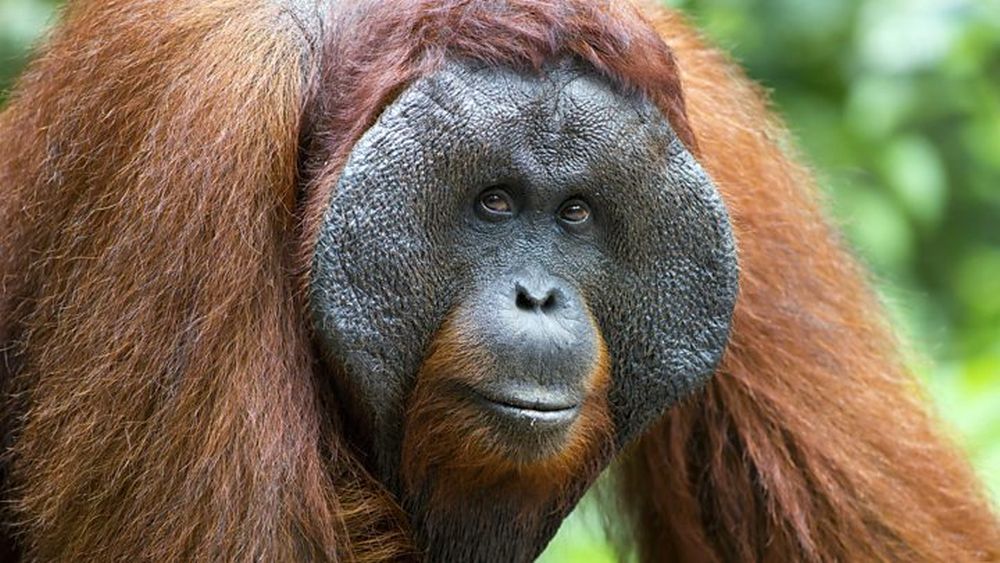 Now, here comes the mystery: according to scientists, there are no orangutans on peninsular Malaysia!  Apparently, all the orangutans are located on the island part of Malaysia, also known as Borneo.

Now, you would naively think I would pop out the photo I took and solve the Mystery – but sadly, no such chance. This was just before the advent of digital cameras, and during my vacation I lost several rolls of film, including the one of the animals I saw.

Now, I’ve heard that there are many exotic animals hidden deep within the jungle, such as jungle elephants that are almost never observed by humans. Does this mean there may be a population of orangutans hiding out in Peninsular Malaysia?  There are at least two Chinese people, somewhere in the world, who hopefully have the evidence!

This is the Teman Negara, a jungle rainforest deep within peninsular Malaysia, and the location of a number of mysteries for me. 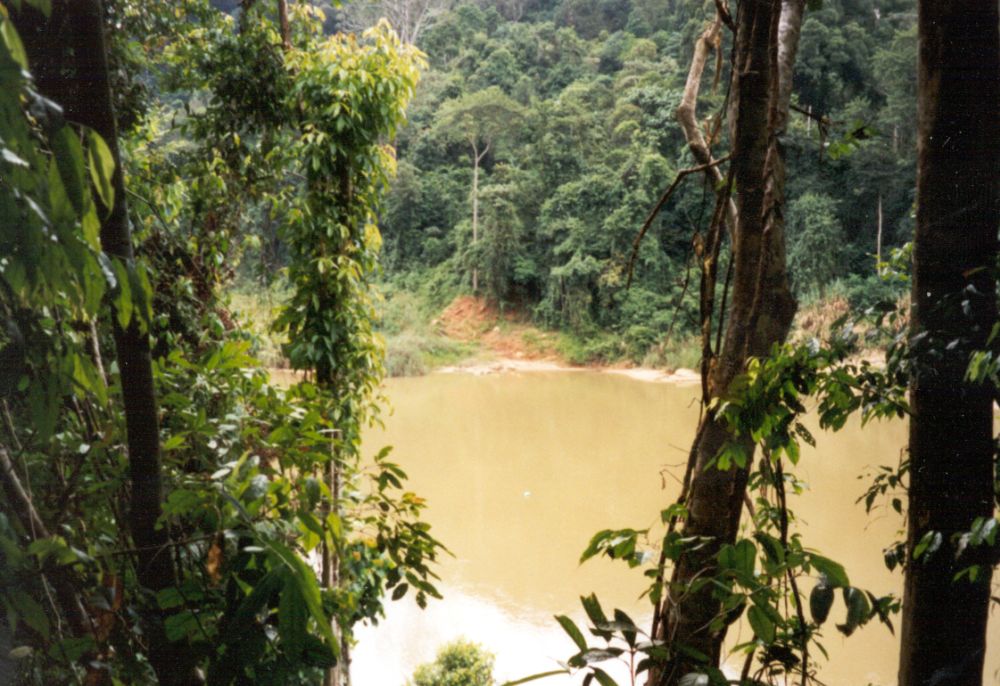 The first Jungle Mystery is this: Teman Negara is not just a rainforest, it is a primary rainforest: the wettest and the hottest that they get.  It is also the world’s oldest rainforest, more than 100 million years old.

Or does this perhaps mean the rate at which new soil is created (for example, from dying vegetation) exceeds the rate that silt is carried away in the river?

One reason that Malaysia is one of my favorite countries is the extreme degree of cultural fusion: Malay + British + Chinese + Indian + Indonesian, as this rather ordinary sign shows: 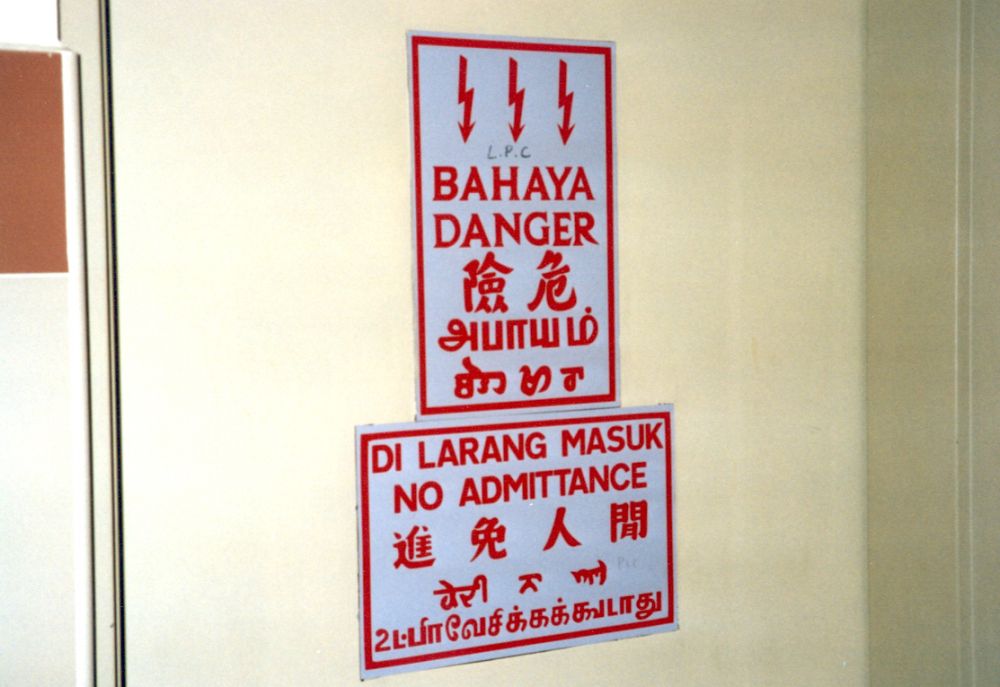 Continuing the series, if I see a peepal tree somewhere, you can be sure I’ll take a picture of it.  I found this one in Kuala Lumpur, in Malaysia: 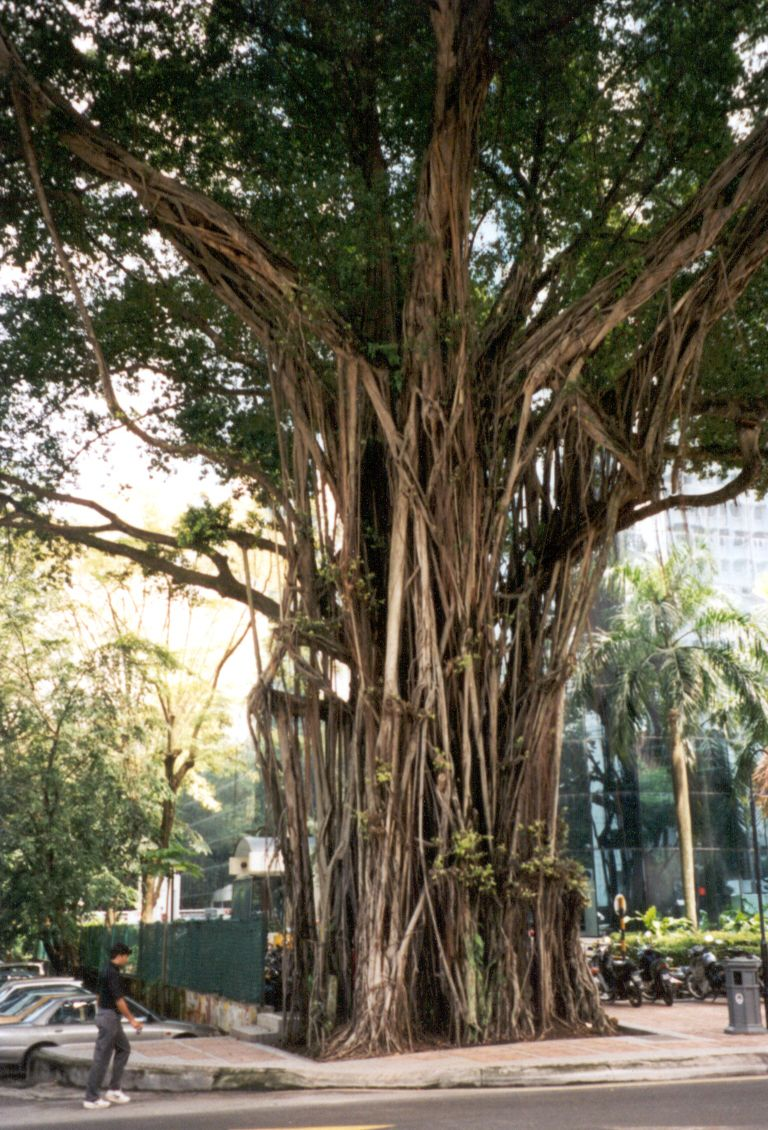 The Cameron Highlands in Malaysia are fairly well developed these days, but back when I first visited in the early 2000’s they were still fairly undeveloped and remote.  In this snap, the mayor of the Cameron Highlands (far right, also doubling as my driver) and I just returned from a jungle walk, and we stopped to smoke something with a local farmer. I am not sure what we smoked, but it was wrapped in a bamboo leaf, and as you can see from our expression, I think it gave us a rather delightful feeling. 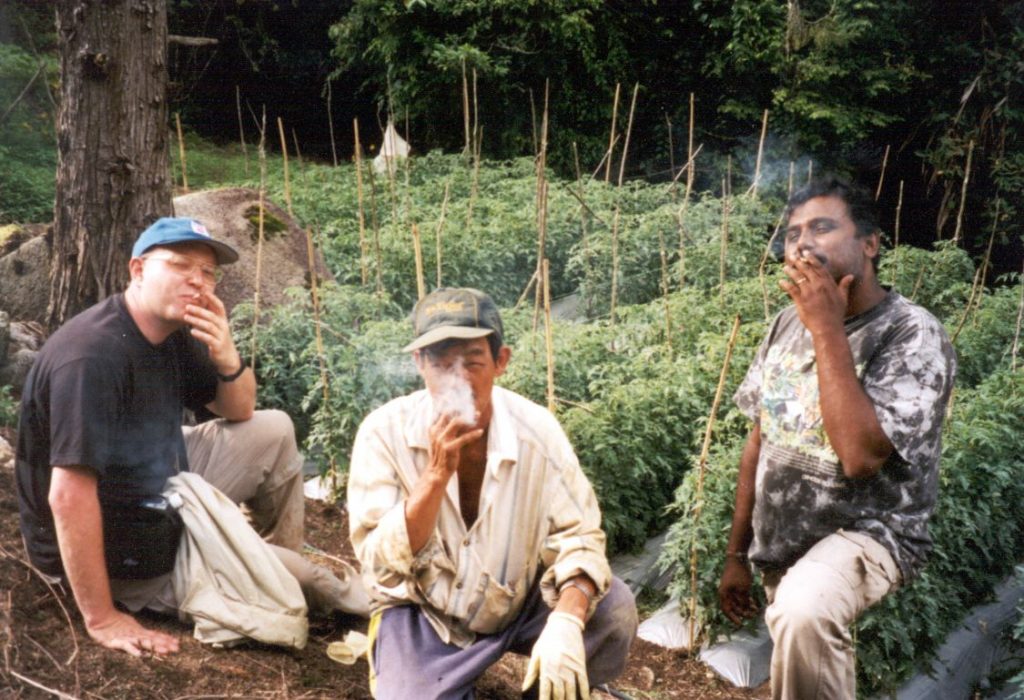