The American 5-string banjo is an interesting instrument that may have its origins in Africa. It has come to play a pre-eminant role in American Bluegrass Music, a style invented in the 1940’s by the mandolin player Bill Monroe, based heavily on the Celtic music imported by European emigrants in the  Appalachian Mountains of the U.S. The banjo has a few advantages that makes it somewhat easier to play than the guitar.  First, although it has  five strings, the  fifth string is a drone and not usually fretted, hence learning the fingerboard really means just learning four strings, not six.  Second, the banjo is typically tuned in a so-called “open” tuning (so that when the unfretted strings are strummed, this forms a chord). This means you need to learn the fingering for two rather easy chord shapes, rather than for dozens; and that chord forms used in one area of the neck can easily be slided up to higher positions.

Unfortunately, these easy features are then compensated by the requirements of American Bluegrass Music, in which banjo tunes are played in arpeggio-style (not strummed), with some 200+ notes per minute!

After playing a number of  beginner and intermediate instruments for many years, in 2006 I invested in my dream banjo, a professional-level instrument known as the Calico, produced by the Deering Banjo company. But whereas good, used banjos can be found on eBay or in pawn shops across the U.S., finding a big, knowledgeable store to shop for a professional instrument is less easy. 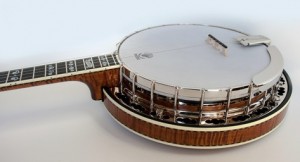 This is where Mr. Dave Shenkman and his business Turtle Hill Banjo came in: with hundreds of professional-level banjos Dave acts as a by-invitation-only banjo-outfitter-to-the-world from his home in Maryland.  So in 2006, and lucky enough to have secured a consultation with him, I clubbed a vacation in Washington D.C. together with a visit to Dave’s shop – and after much consultation and advice from Dave, and after trying literally dozens of banjos (including some antique banjos worth more than $100K USD!), I always kept returning to Calico he showed me.

Aside from being arguably the most beautiful banjo of the Deering line, built with a maple resonator and with a fingerboard with edged inlays, the Calico has a crisp, bright sound with very good sustain. But what appeals to me most is the playability. The fingerboard is un-radiused and narrow, and I find it easier to control than any other instrument I’ve tried.

I am player of slightly-below-average skill, but a composer of significantly-below-average talent.  Below you’ll find links to a MIDI file and to tablature for a song I composed, played in 4/4 time and in Open G tuning.

Well, I just expanded my collection!  While I love my Deering Calico, it‘s heavy (around 12 pounds) and very valuable, so it‘s not good as a traveling banjo. So now I am the proud owner of a Deering Artisan, shown in the photo below on the left. 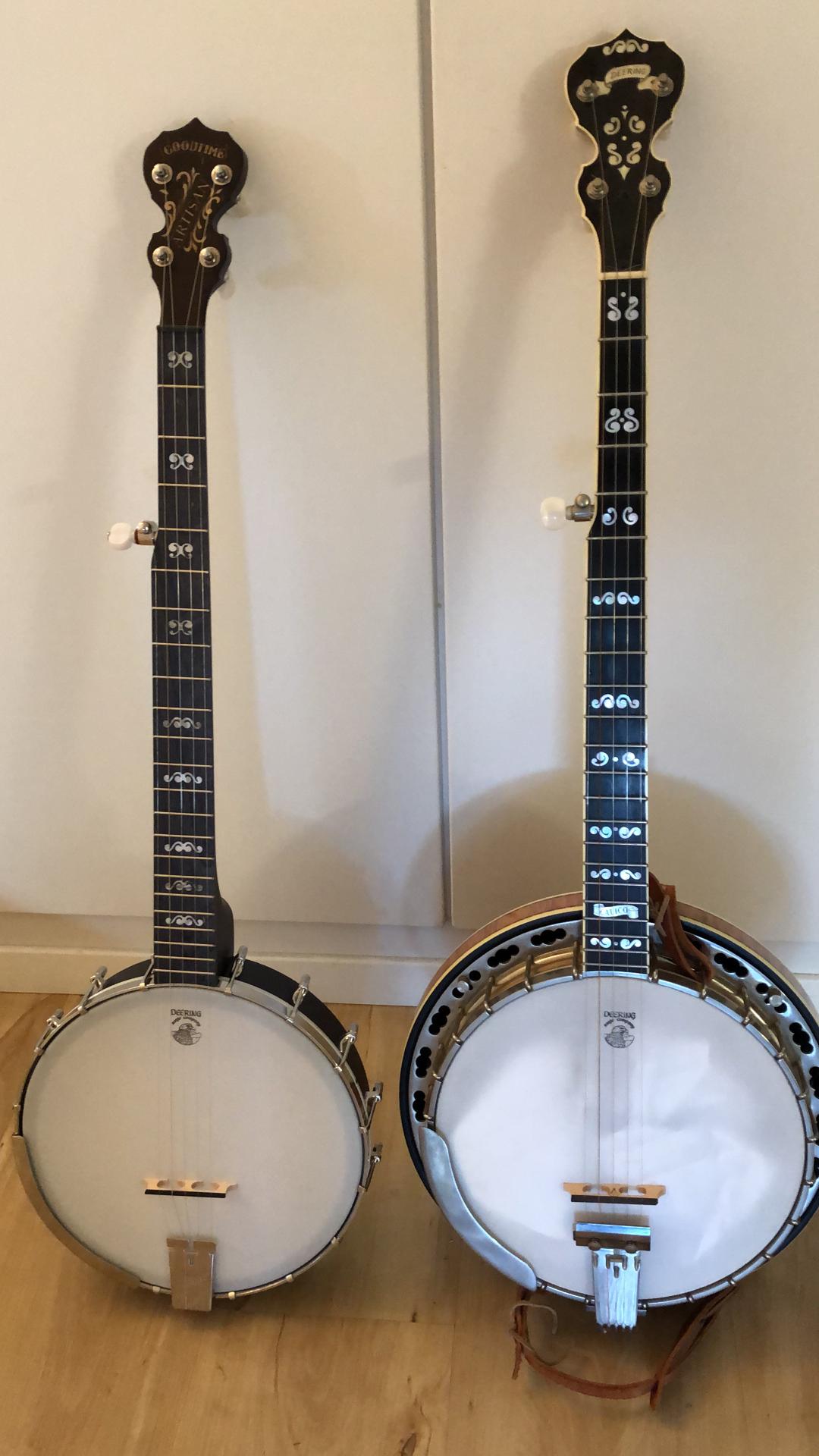 It weighs in at less than 4 pounds, and it‘s also what‘s known as an open back banjo. This is the type of banjo used for a different type of music, known either as frailing or clawhammer style – I haven‘t yet learned that style but I‘ve just started to learn!