Research physicist was my first career choice. But since leaving this area, I feel more passionate about it than ever – probably because I have the time and energy to explore a much broader range of topics.

On these pages you’ll find a summary of my work and hopefully a few interesting stories about some very exciting times!

For a quick overview, have a look at the places I’ve worked in physics.

The best part about scientific research is working very hard on very challenging problems with very talented people from around the world.  I’ve had the great pleasure to collaborate with many hard-working scientists at many top-caliber institutions. Here’s a snap from around 1993, where I am standing next to Mr. Fang in the so-called Epi-Center Laboratory for Molecular Beam Epitaxy at the University of Illinois.  I had the honor of getting to know and work closely not only with Mr. Fang but with a very large number of the “first scientific generation” that was allowed and able to leave China and work in the West. They were all truly scientists of the highest caliber – but most of them also wore deep scars (if not downright PTSD) from the Cultural Revolution in China. 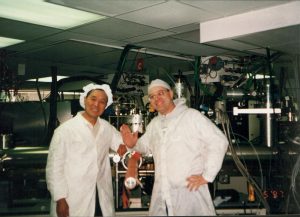 But I’ve also had something in large measure: luck.  Right from the first day I started doing research I had the good luck to be mixed up in some highly exotic and very cutting-edge topics.

Here’s a brief chronological summary of my research career.