As part of a large IT transformation that I helped drive, it was necessary for us to hire 20+ talented IT professionals. And add to that around 30 mostly Indian colleagues that were to join us to run the Transition and Transformation (T&T) program. And add to that at least two other large IT teams we wanted to consolidate. And because we had nearly 150 mostly IT staff, it was necessary for us to locate and rent a building dedicated to IT.

So I had a once-in-a-lifetime opportunity and priviledge to take off my IT transformation hat and put on my facilities management hat.

This blog series recollects a bit of the journey before too much time passes and I forget some of the more interesting details.

What not to do

I’ll begin at the beginning with this message: if you are planning to move your staff to a new business location, there are consulting companies that are specialized in helping you move. Sadly, we had no funds to use such a service. But it is something I highly recommend. During my tenure as facilities manager there were many, many, many instances where – purely because of sheer luck – we somehow avoided pitfalls with enormously high costs. The only way to avoid these costs in a planned, risk-managed fashion is to get professional help.

I looked at a few different properties. They were all empty when I saw them, so you really have to use your imagination about what it would look like if your organization was located there. I also relied on architectural blueprints of the floor layout that we transferred to Microsoft Visio and super-imposed with desks and furniture.

Electricity (enough power in the right locations) and IT (the needed IT infrastructure, such as LAN cables) and telephony are also important considerations. Fortunately, I had my good friend and colleague Christian Neuenschwander involved. He is not just a hobbiest in these areas, but in fact he has a professional-level of experience in these topics, as well as being a certified electrican. Had I not had someone of his caliber involved, I would have insisted on using a professional consultant. Why? In Switzerland there is a law which says you can take over any existing electrical infrastructure, no matter what status it’s in. But . . . if you need to make improvements, then you need to bring the entire area up to the most modern version of the building codes. That is a huge financial risk that could easily by six-digits of cost!

This is the location I finally recommended to the team – but I took great pains to ensure buy-in from everyone. At the end, it absolutely needed to be a  team decision. 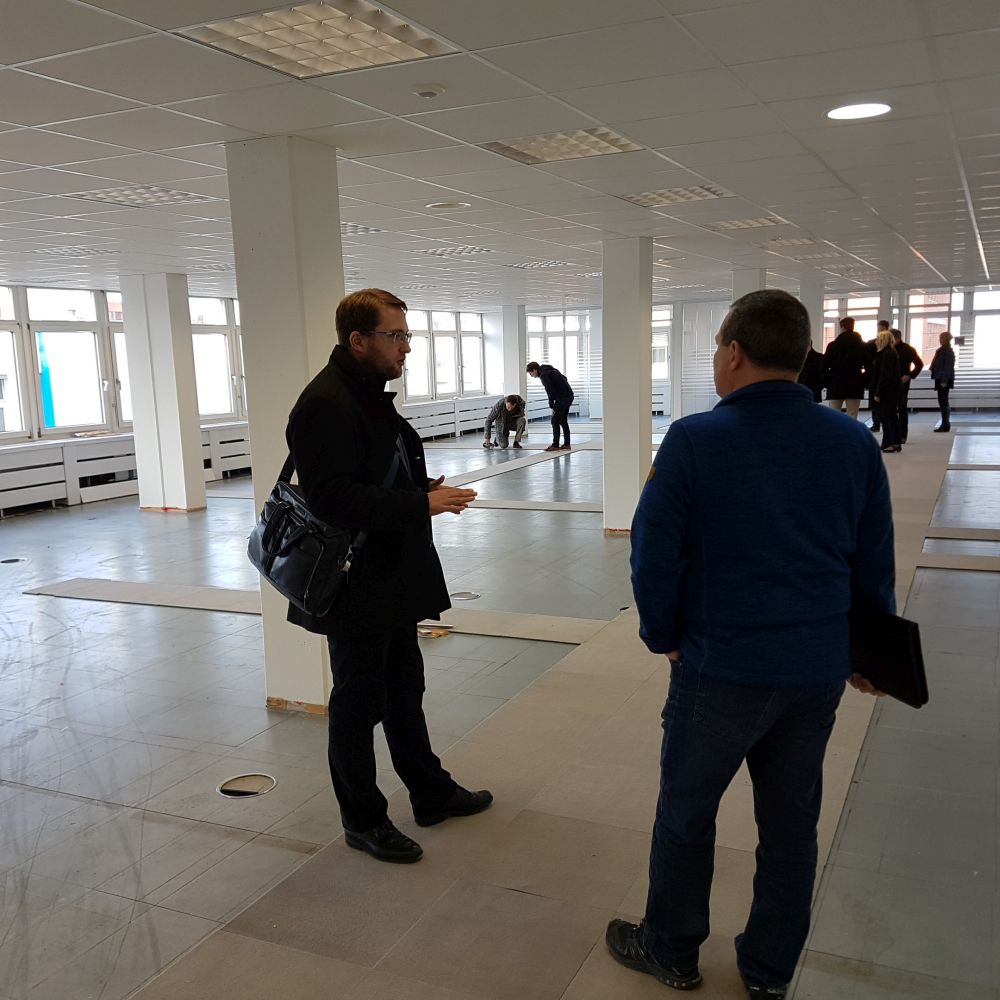 The building was very light and airy, there were almost two dozen glass-walled conference rooms, there was a air cooling system, and the whole place was located about 50 m from a convenient stop on a public transportation tram line. We had two-and-a-half cafeterias, plenty of power in the right places, a raised floor in which power and network cables ran below, and two network closets. Four restrooms (2 male, 2 female) and a shower. Ample number of parking spaces. And the building was situated around 50 meters from a tram stop frequented every 5 minutes by trams.

The only thing we were a bit worried about what that a selected area of the building had CAT-3 wiring instead of CAT-6, but we felt it was a risk we could take.

We could not have found a better spot!