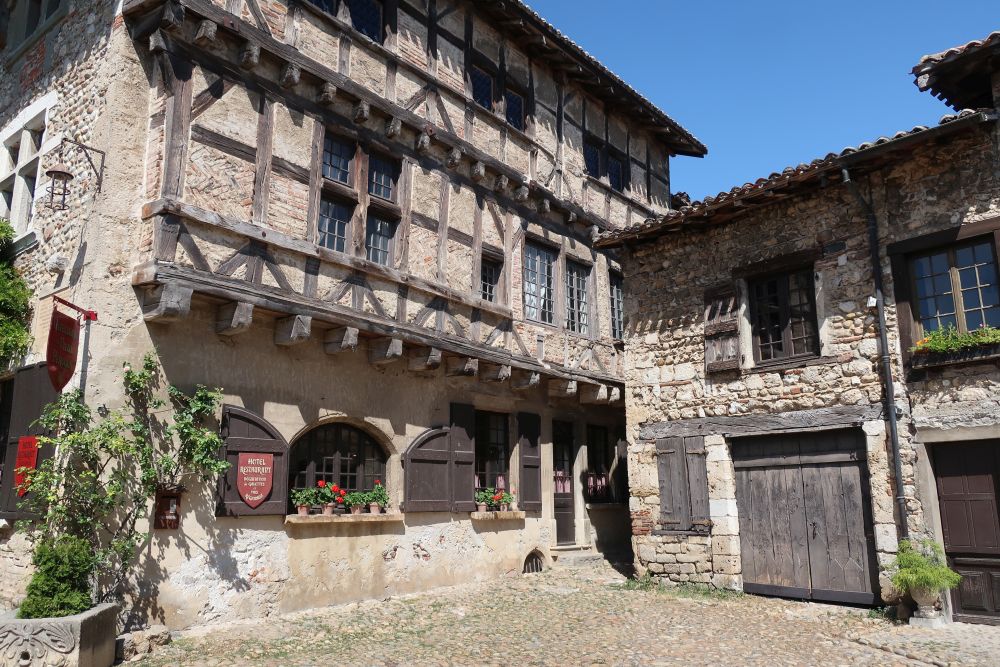 Well, there are no such things as Donzenac berries, but I spotted these berries in the ancient medieval French village of Donzenac – nestled in a region of Dordogne so deep and remote, probably none of the locals has ever seen a tourist in their lifetime.

Beware, each berry has enough neurotoxin to kill 17 small children or 9 goats 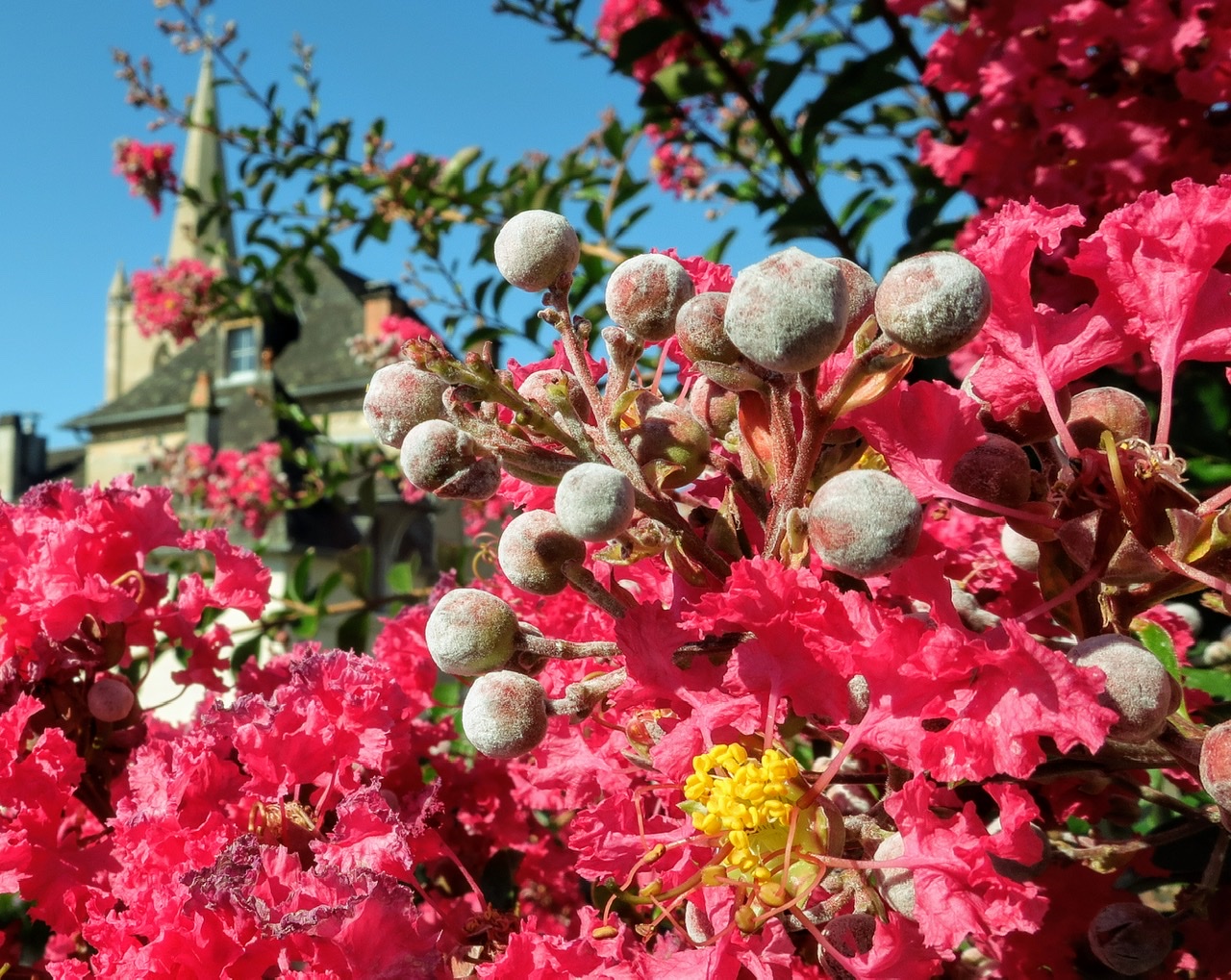 Dogs survive and thrive, by being cute and ensuring humans love having them around.

So, too, do ancient, decaying medieval cities survive and thrive, by re-inventing themselves to attract tourists.

Here’s the town map of a very remote medieval town, called Pérouges, It’s located a long way from civilization, and it’s high on a hill, and when you park you have quite a long way to walk when you reach it. 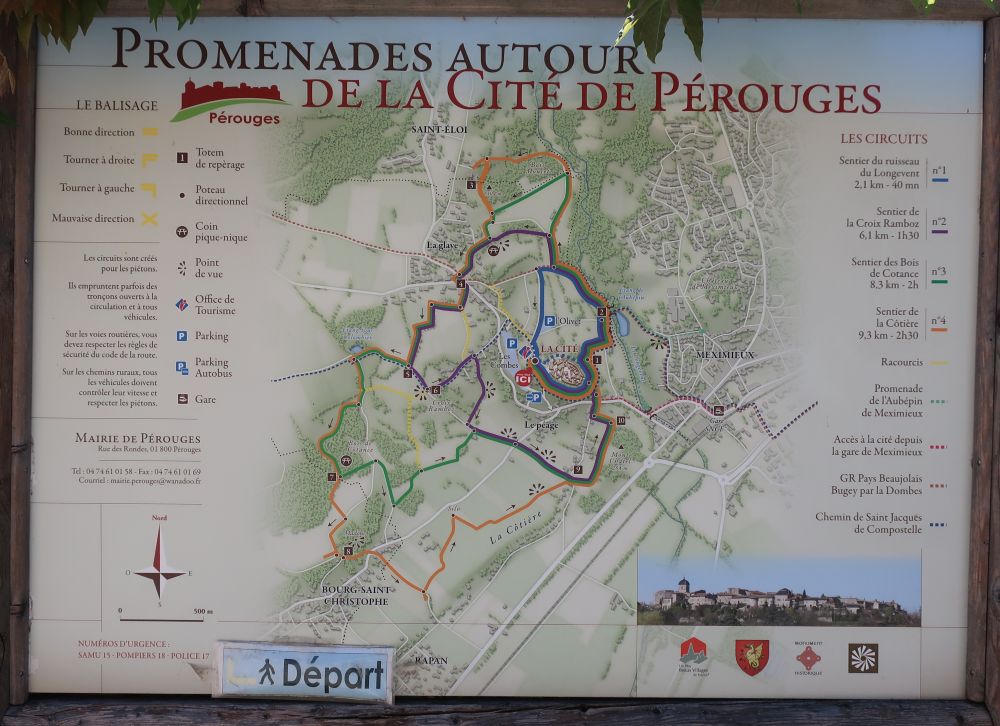 But as the up coming series of snaps show, you’ll be glad you did!

Recently I showed this snap of a very usual water fountain in Switzerland, 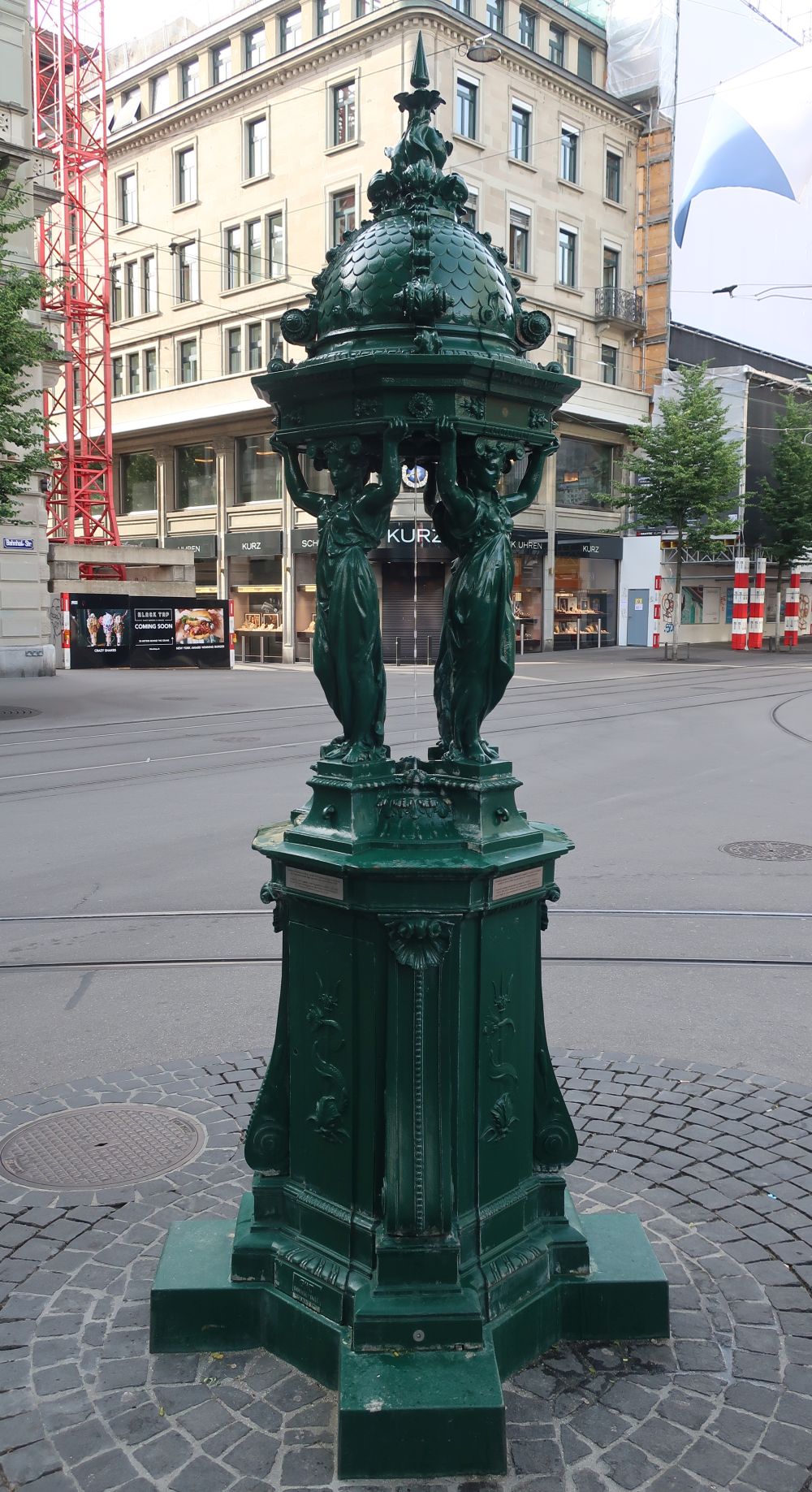 Well, my eyeballs nearly exploded when I stumbled across this fountain in the French city of Clarmont-Ferrand,

I have no idea about the histories of these two fountains, why they would be in these cities – and indeed, whether there are more such examples in other cities?

The last time I was here was more than two years ago. It’s a medieval village nestled deep within a national park in France, and in which the overwhelming majority of its residents are involved with the cutlery industry or knifemaking.

The village center has changed incredibly, and most of the stores and storefronts are vacant. Perhaps a result of the Corona virus on the economy?

I could not wait for my first trip to a scientific conference, in a famous Asian location I choose not to mention. At the time, I was an experimental condensed matter physicist, but I previously worked in the field of nuclear physics with various security clearances I am still not allowed to talk about – and this much is well known: nuclear physicists traveling to this country always get a visit by their secret service, usually in the form of a very attractive lady offering “favors” for information.  Already from my first day in this country I was looking forward to the visit!

Well, after 3-4 days here I was very disappointed that “the visit” did not occur. No beautiful ladies, no offers of money. Nothing.  Now, although I once worked in a group of scientists who worked on nuclear weapons, but I was still hoping that this would be enough for “a visit.”  No such luck.

But as un-luck would have it, my stomach was bothering me and on the fourth day of the conference I had to duck out, to sit for a while on the toilet. I should have been at the conference, but in fact I was sitting on porcelain.

As I was “worshipping the porcelain god” as it were, there was a knock on my hotel room door. I said nothing, and the door opened and a man walked in. He could not see that I was in the bathroom, and I did not say anything. He walked through my room, inspecting it – I could see him clearly – but as soon as he reached my suitcase I announced myself and startled him.  He quickly left . . . but as he was walking out, I noticed his shoes: good leather shoes, with thick rubber soles. They did NOT pass at all to the dirty laborers clothes he was wearing, or other shoes I’ve seen.  But he did have a room key, and if he were part of the hotel staff, he would have been dressed like the cleaning staff. (If you have ever seen laborers in Asia, then you know how it is.)

So, was he a secret agent looking for evidence to use against me?  I may never know the answer to these and other questions!

A church-clock, to be more precise – and a red one, at that. 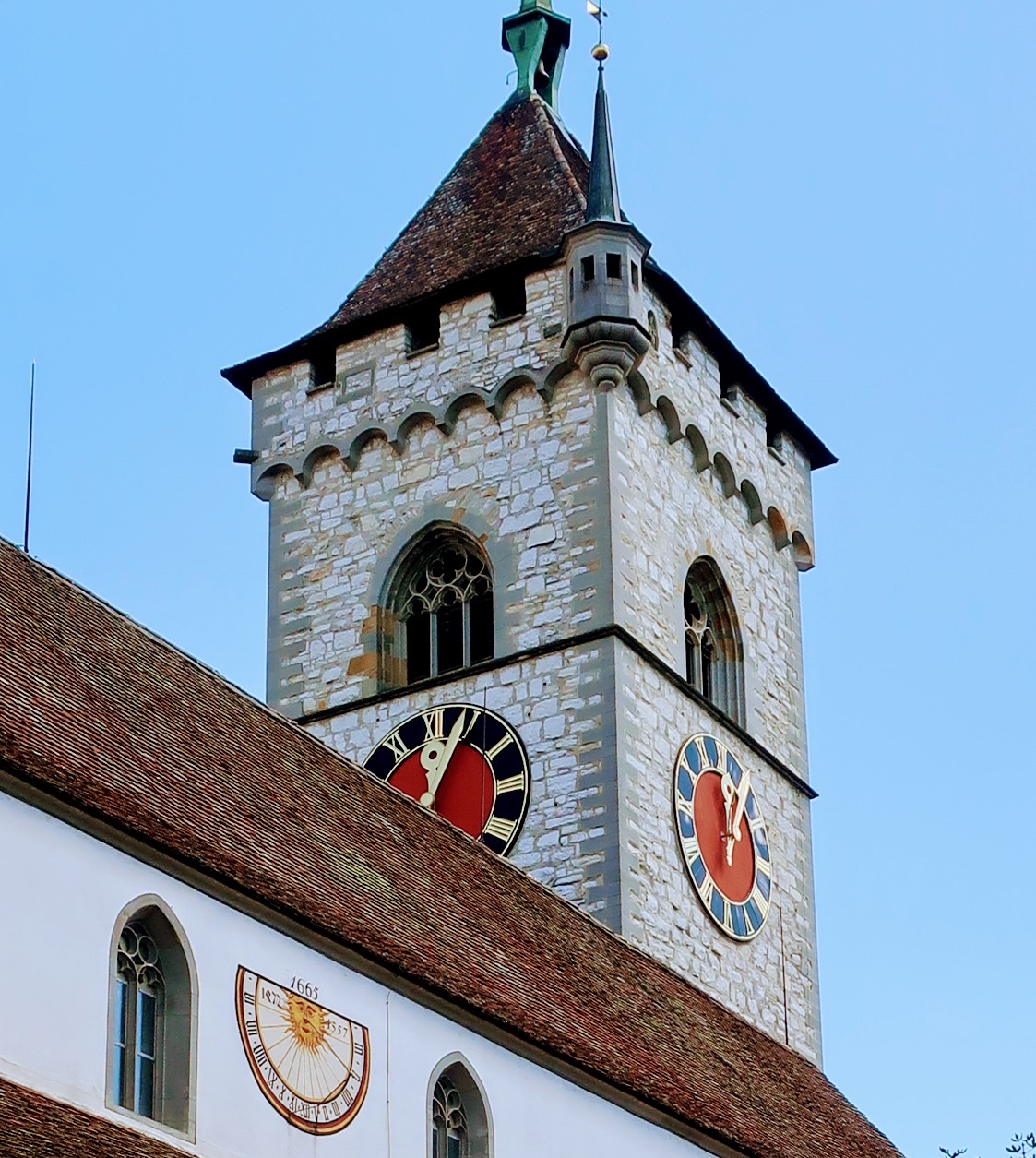 The newest of the medieval church clockfaces in Switzerland are all blue; those slightly older are all red; and those older than that are black – but they are very rare and it‘s almost impossible to spot one.

Why?  Presumably there was a company carrying out renovations – but I have not been able to find out any more details on the Internet. 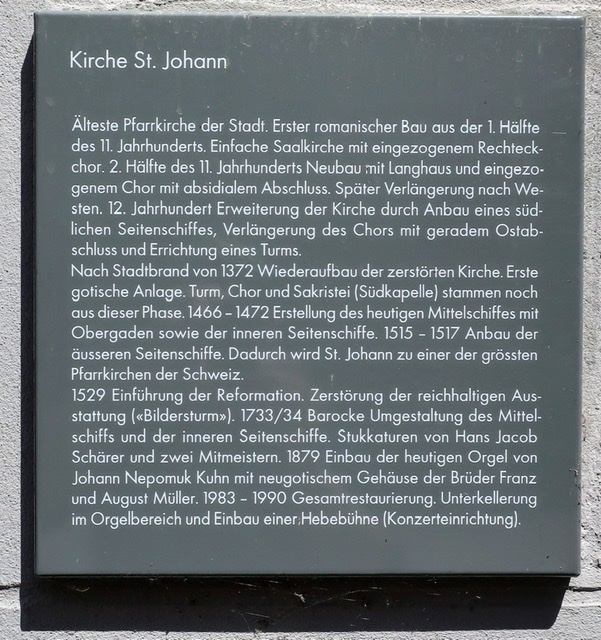 In a rare treat I was able to capture all of them at the same time in a clear morning sky!

Here’s the much redder and larger Jupiter, just next to the fainter Saturn, 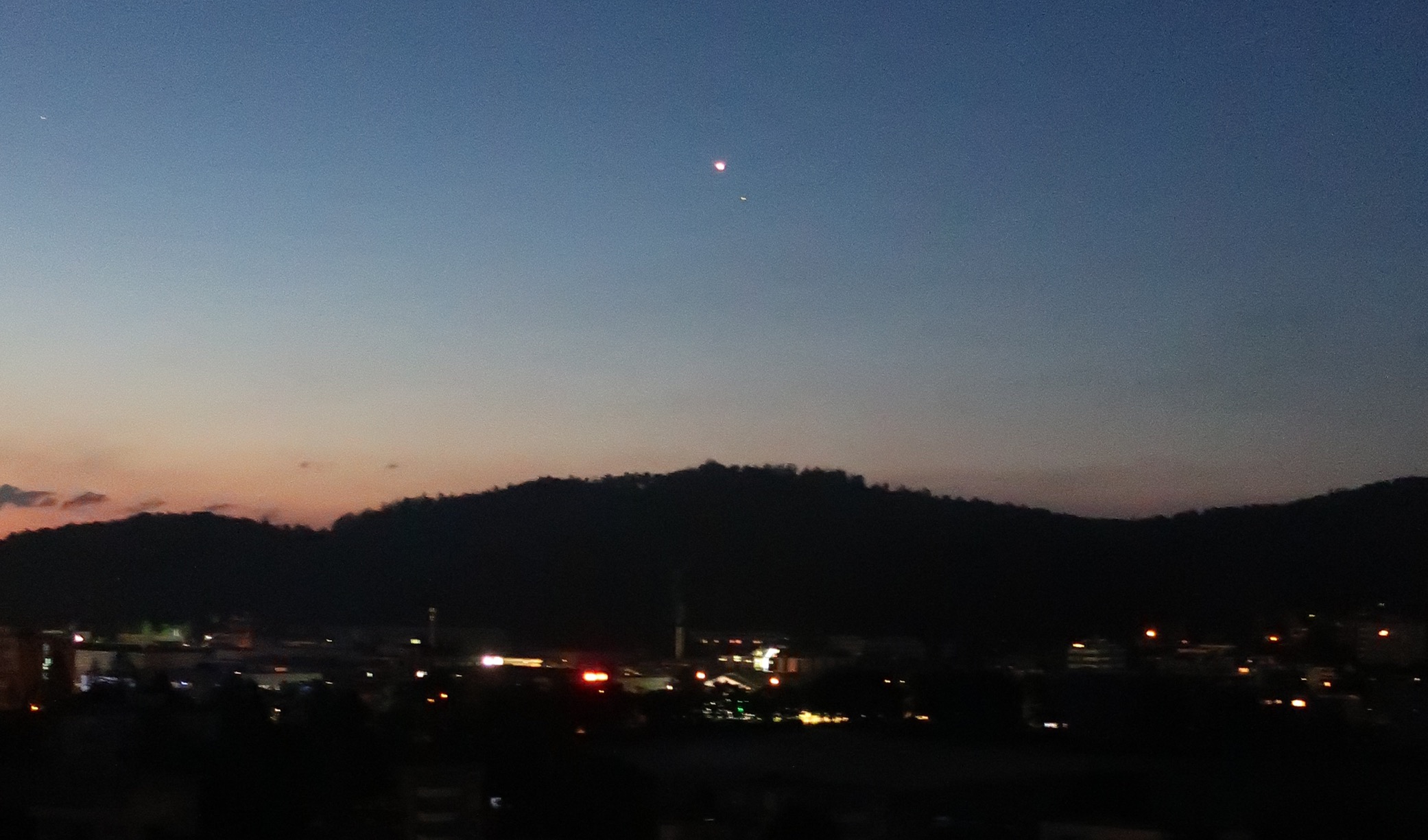 And here’s the Moon and Mars, 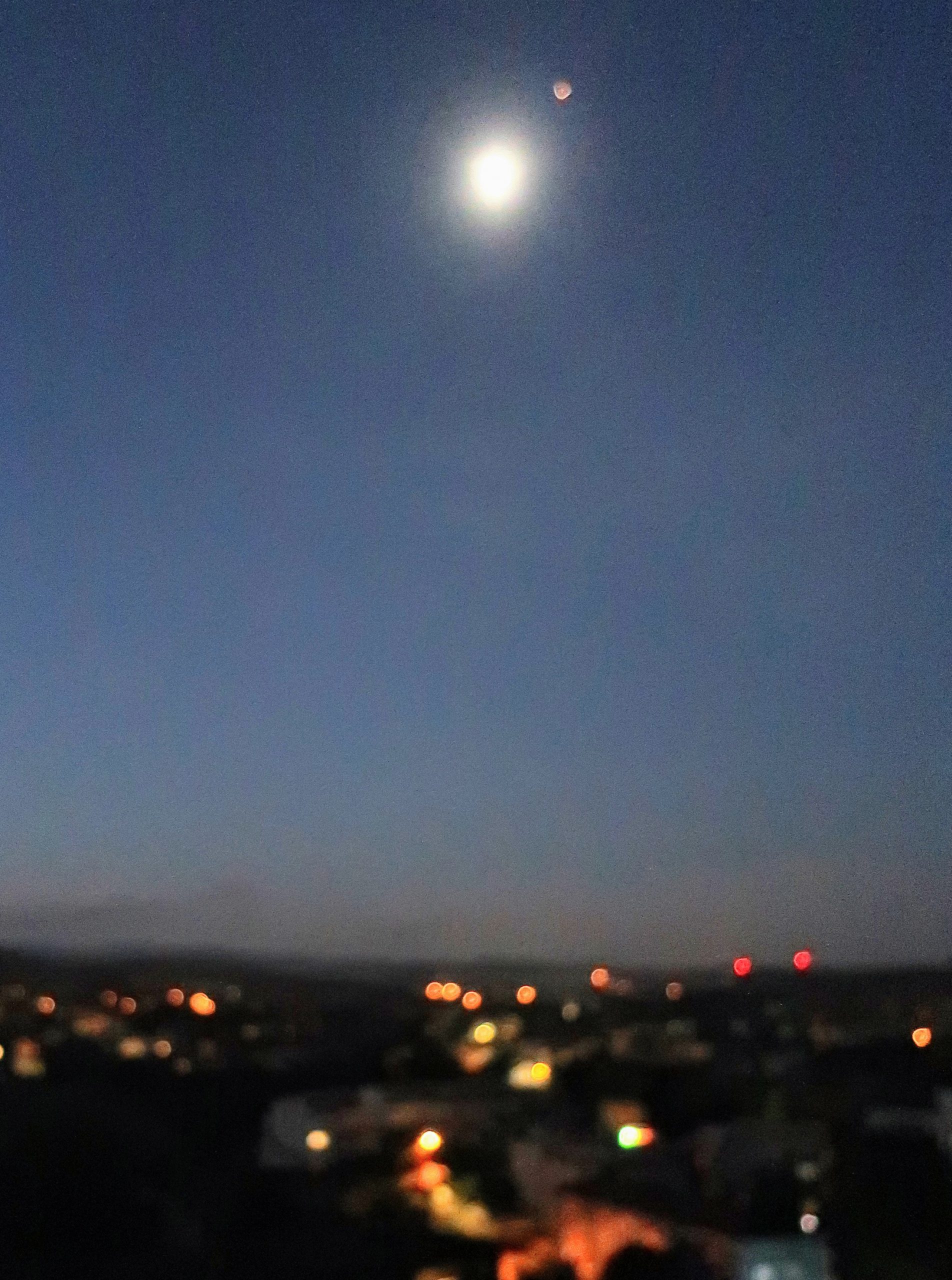 The canals on Mars are clearly visible in this snap. Even today the Martian canals are recognized as massive things that previously transported huge volumes of water. It’s a little known and oft hidden fact that despite all the rovers on Mars, scientists have yet to prove or disprove this amazing network of canals was somehow formed by nature, or else created by alien intelligences greater than man’s but as mortal as his own.

Schaffhausen, a jewel in the crown of northern Switzerland, has more Bay Windows than any other medieval city in Europe, and most of them are too fantastic to believe without seeing, as this snap shows! 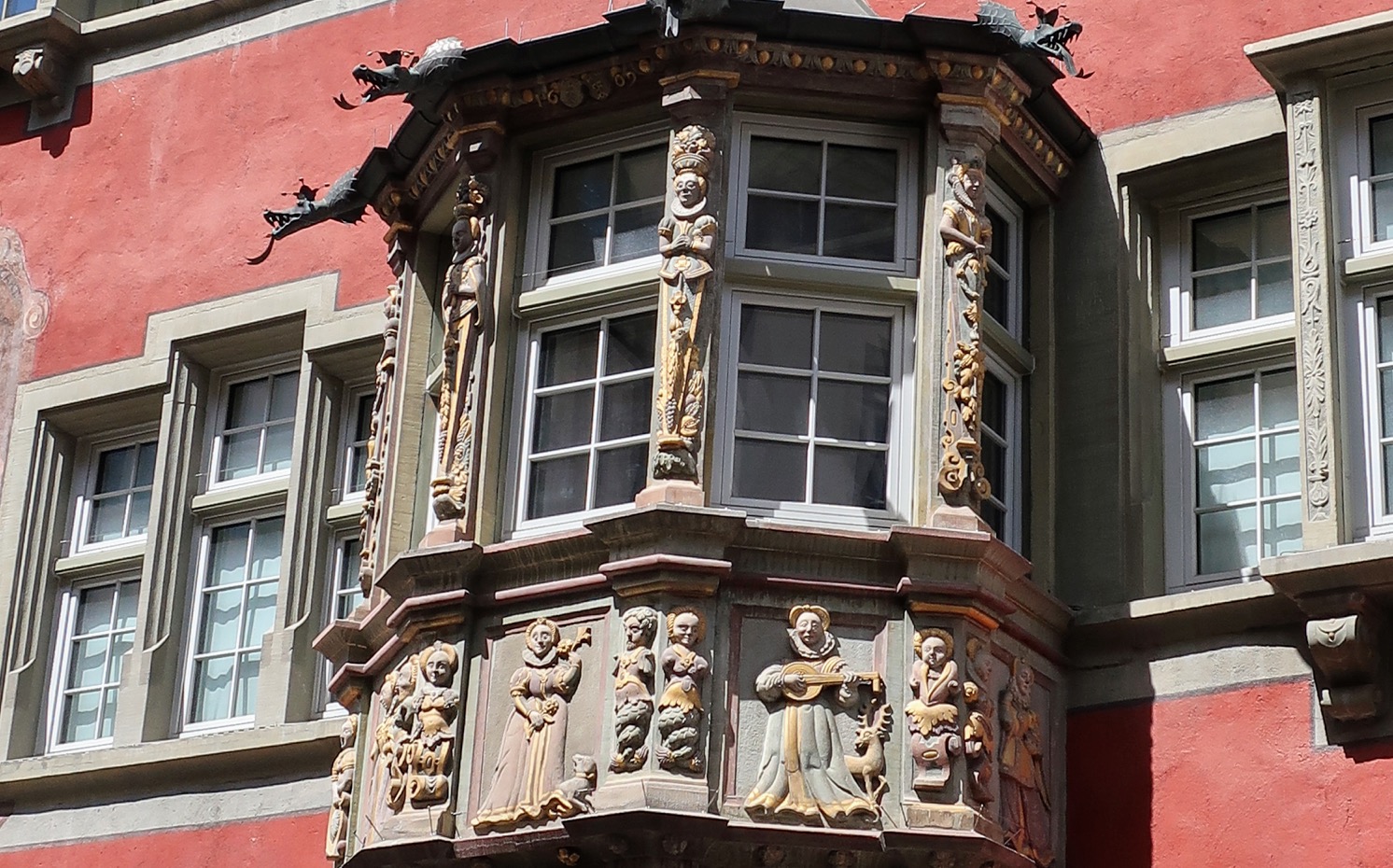 Continuing the series, this shows that the clockface on the main gate to the  medieval  village of the North Central Swiss Neuenkirch is also blue, 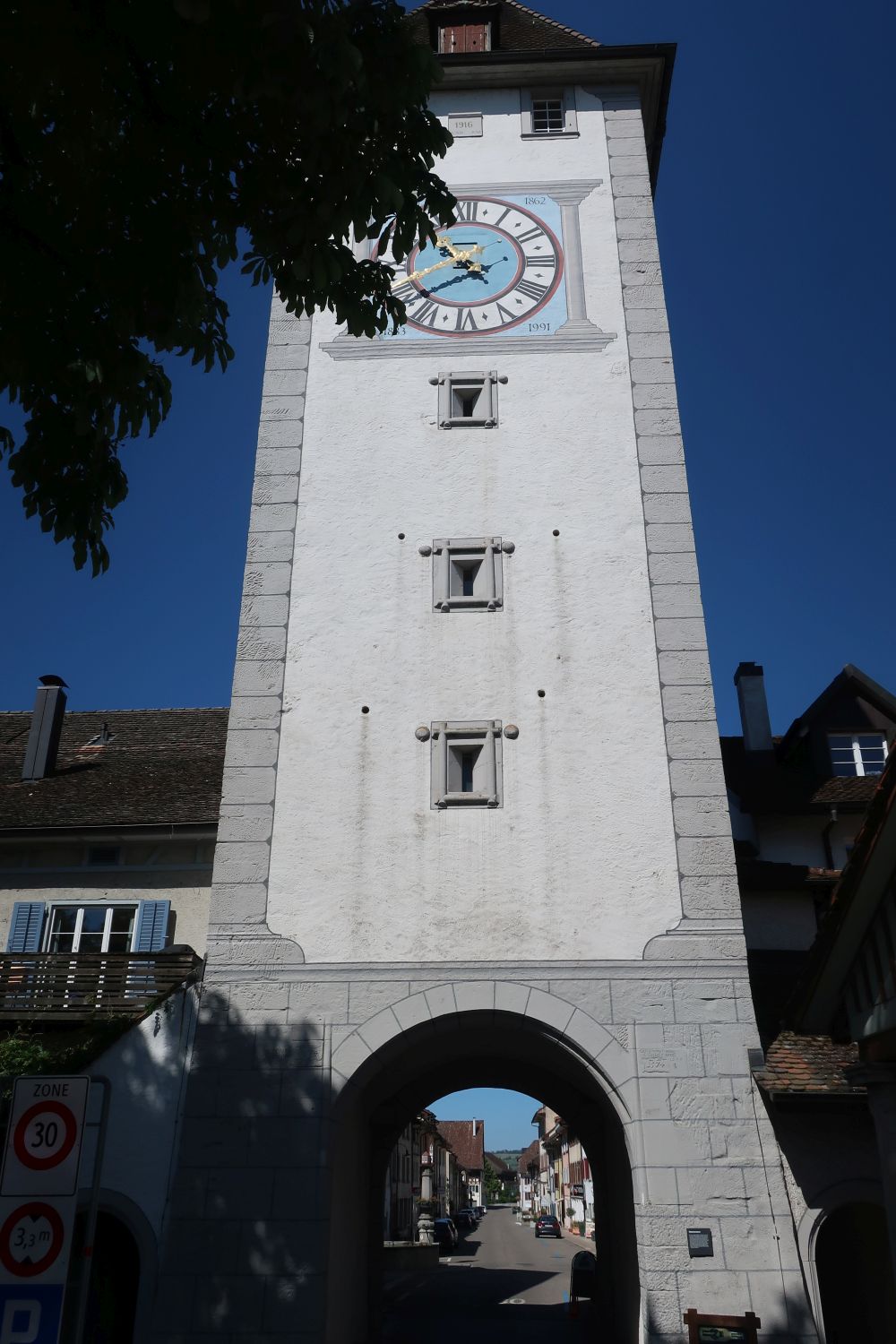 “I don’t like mysteries – they give me a bellyache, and right now I’ve got a beaute.” That was Capt. Kirk, but I am the same way. It drives me nuts that almost 100% of the more modern clockfaces on medieval Swiss churches – and there are dozens of them – are the same blue; whereas the somewhat older clockfaces are an orange-red. Presumably, there was a movement (no pun) to refurbish the clocks – but until now I could find no historical record of this.

Continuing the series, as artistic a snap as I thought I could take of the wonderful but mind-blowing Southern German monastery of Zwiefalten, 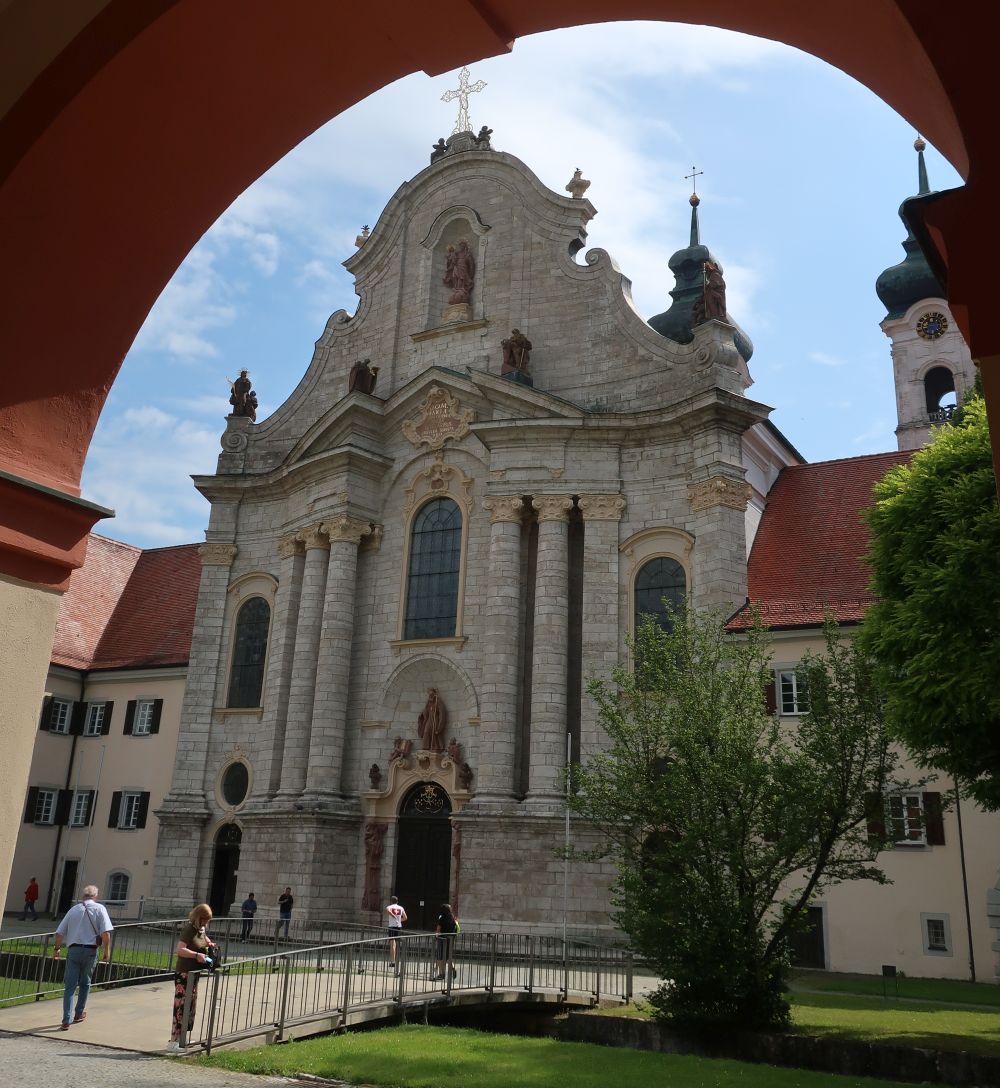 Continuing the series . . . as artistic a snap as I thought I could take of the breathtaking Zwiefalten Monastery in Southern Germany, 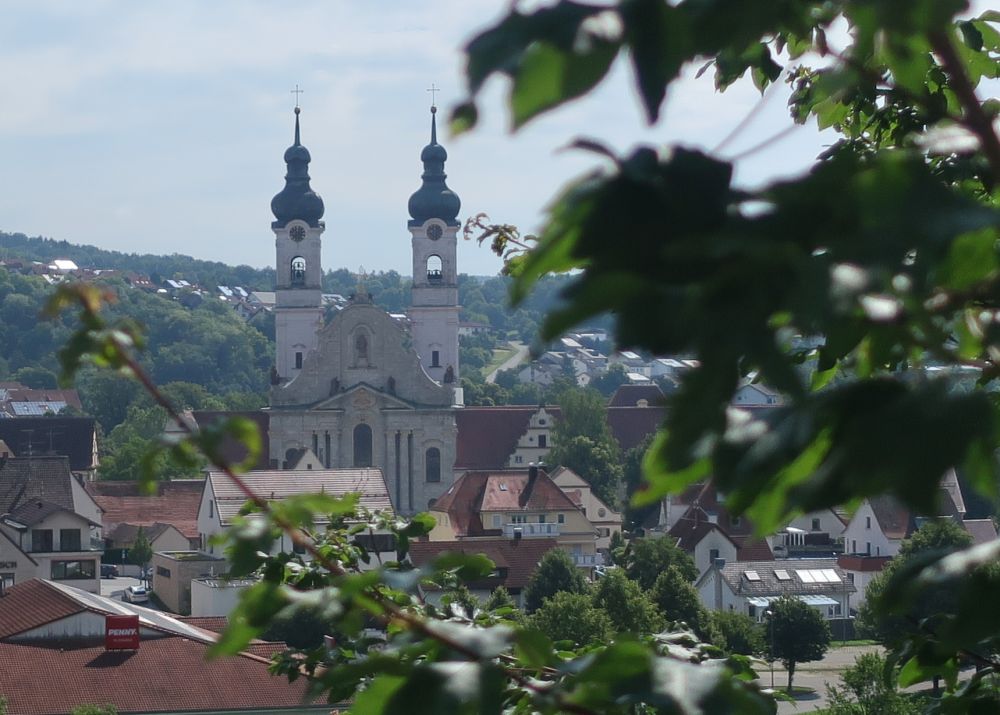 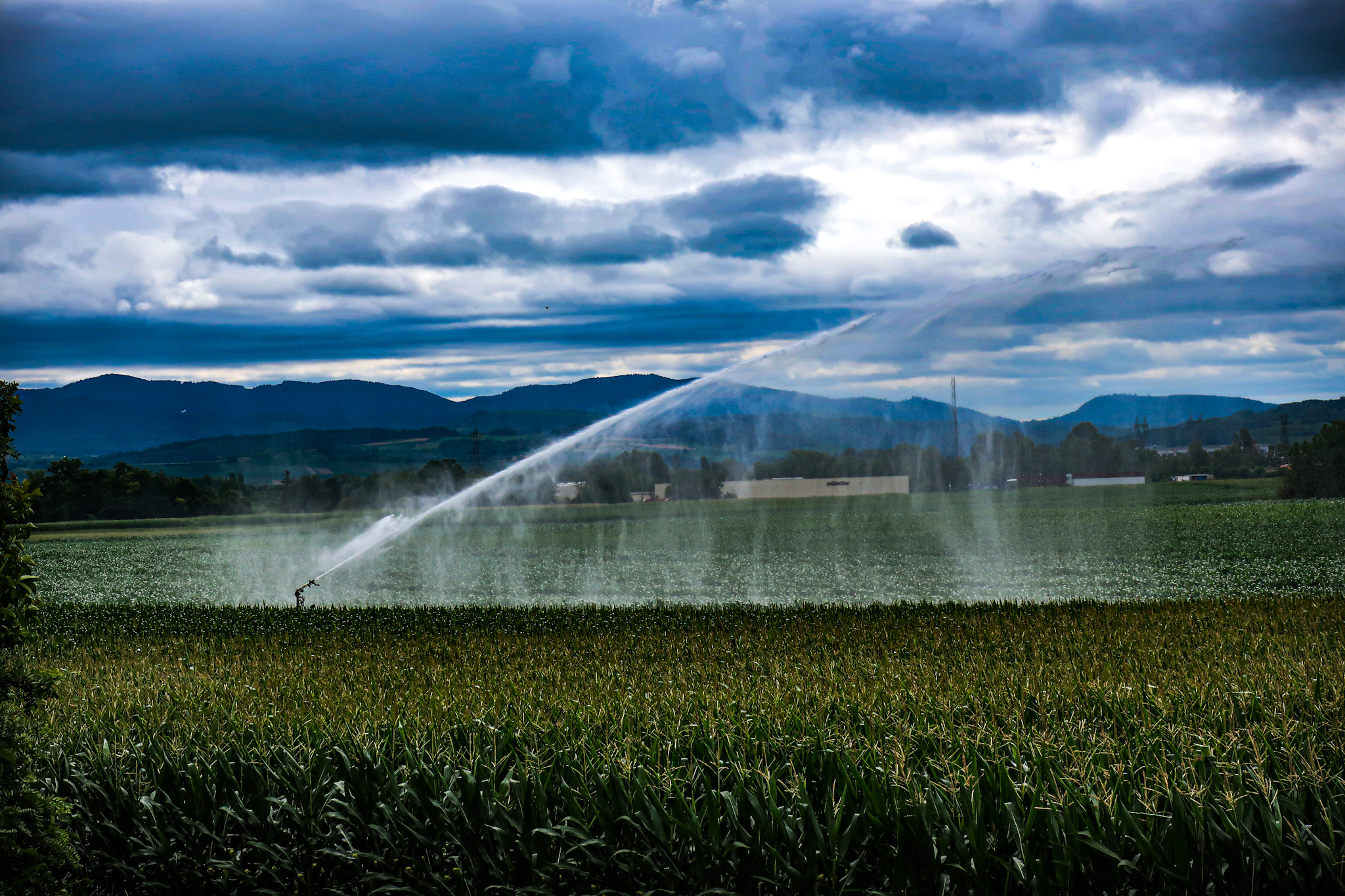 Continuing the series, here’s a shot looking down the long street towards the main medival gate, 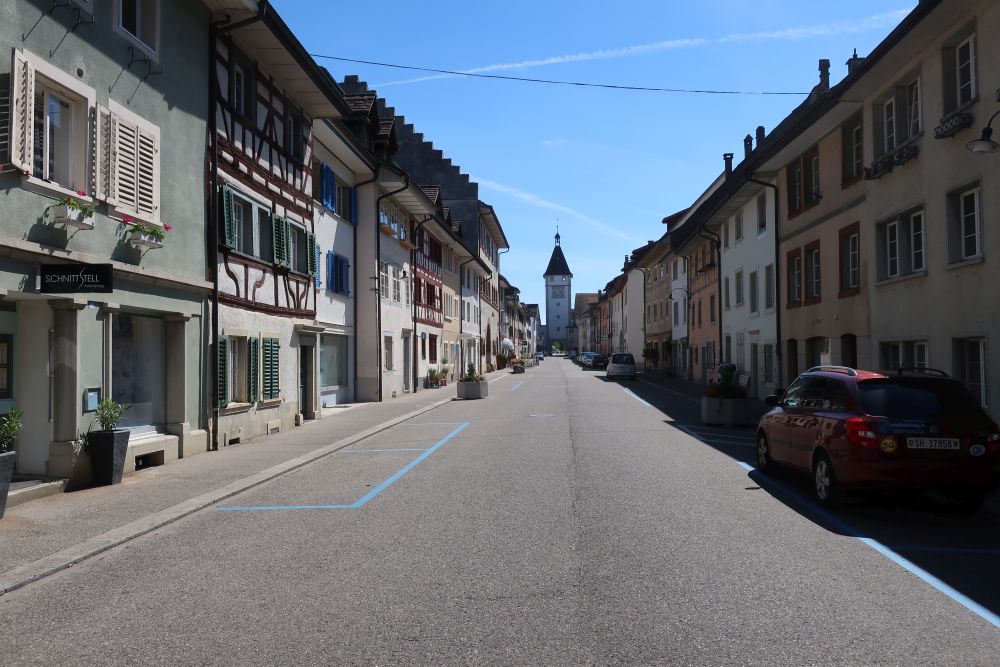 The timing and location of the sun were almost perfect, as the shadow very neatly runs exactly down the line of buildings!

It’s not Winterthur – sorry about that – but one of the dozens and dozens of small villages that surround Winterthur and whose names are too numerous to mention: Elsau, Seuzach, Rätterchen . . . I’ve been to all of them so many times that their names and their sights blend into homogenous obscurity. Some of them were named in a time when people had no education – such as the Swiss Dorf named, appropriately enough, Dorf . And some of them dating back eons, when Switzerland was home to enclaves of Neanderthal humans with their massive jaws and presumably unique language, and the names of the villages are linguistic remnants of that pre-paleolithic time gone by – such as the village named Thaa.

This one is a bit different: 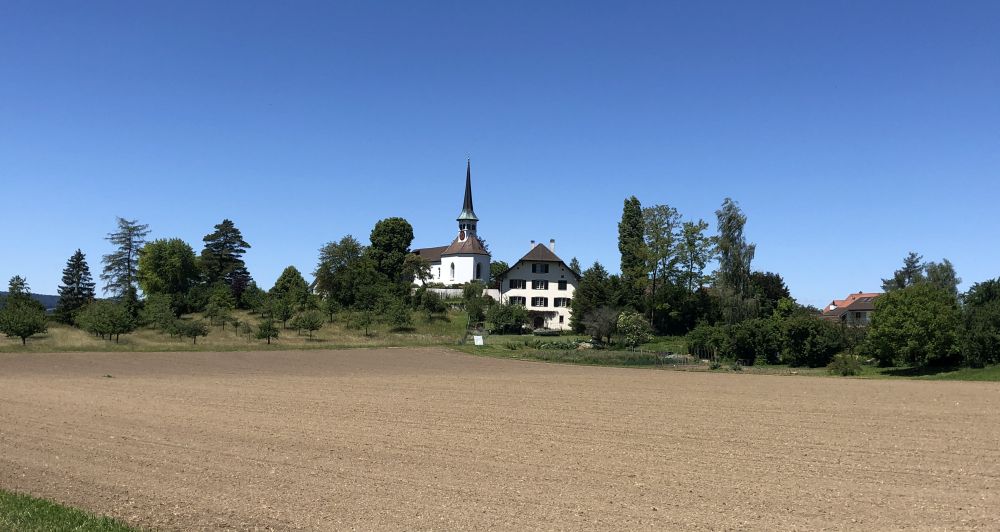 It’s different because the clockface on the church is red, not blue. I have a theory – unconfirmed until now – that the overwhelming majority of churches in North Central Switzerland were outfitted with new – and blue – clockfaces at about the same time. Clockfaces on churches that are demonstrably older are universally orange-red in color.

This is what I did to one of my snaps of a stone column adorning the window of a house in the Alsatian village of Colmar: 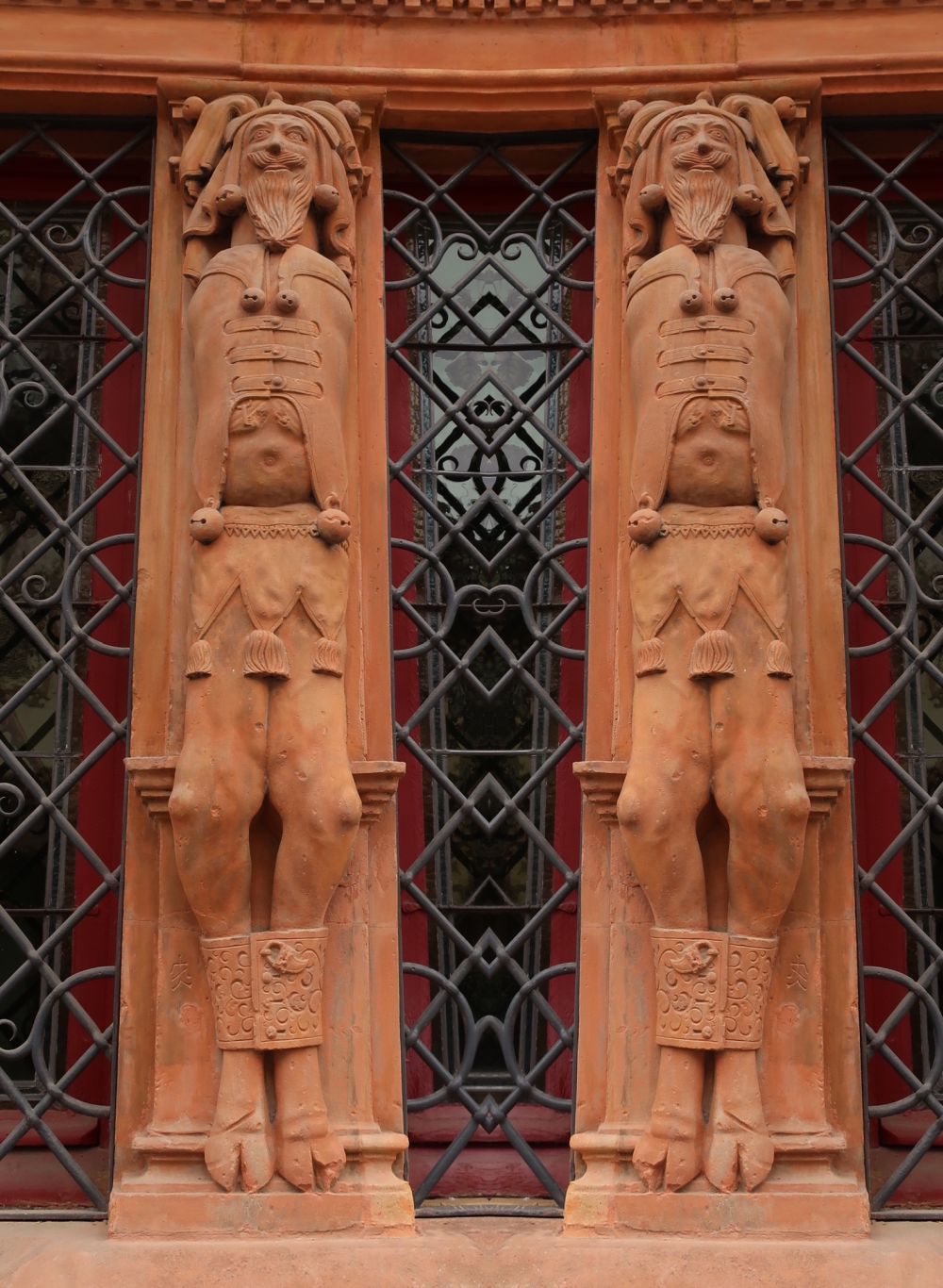 Continuing the series, a wonderful fountain next to a pond in front of a mighty California Giant Sequoia tree,

I spotted this in the Southern German town of Stuttgart-Vaihingen, 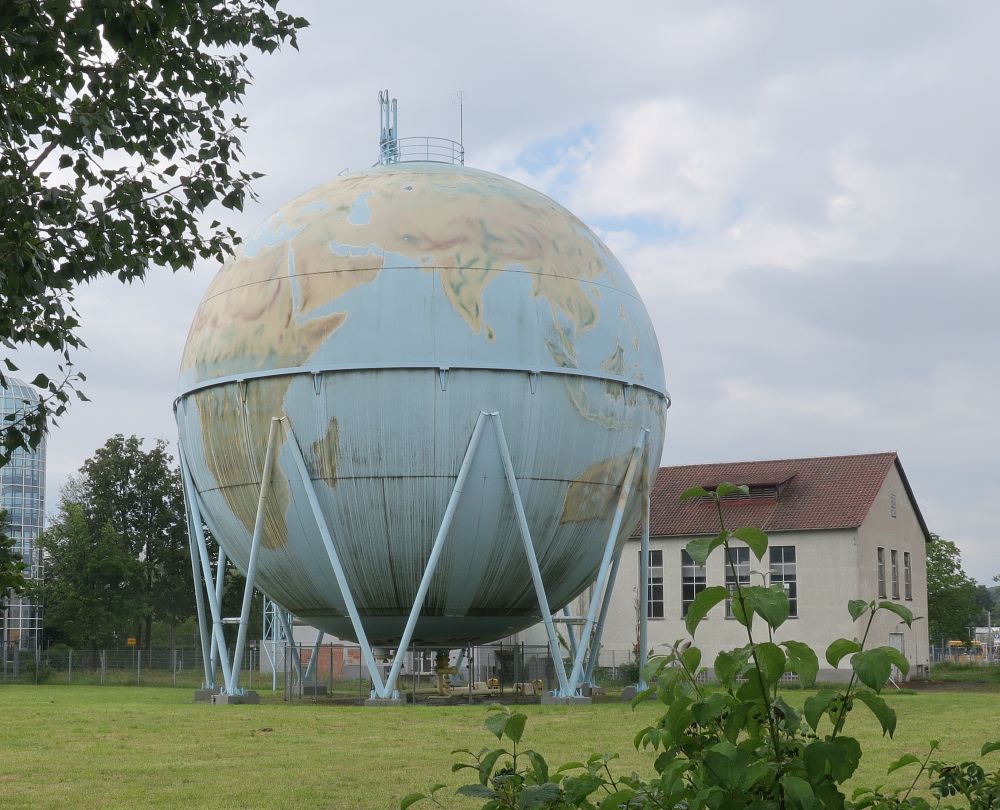 Yes, that’s Zwiefalten – not Zweifalten – and you can see some earlier snaps of this mind-blowing Southern German monastery that I took here. In fact, even the insects surrounding this place must soak up the goodness, because on a recent trip I spotted an insect almost as big as a man’s head. I also spotted a fish in a small brook that was almost the size of an American alligator.

If you step inside, there is a very real risk your brain will explode. And as you can see from the outside, the stunning sights are hardly less interesting: 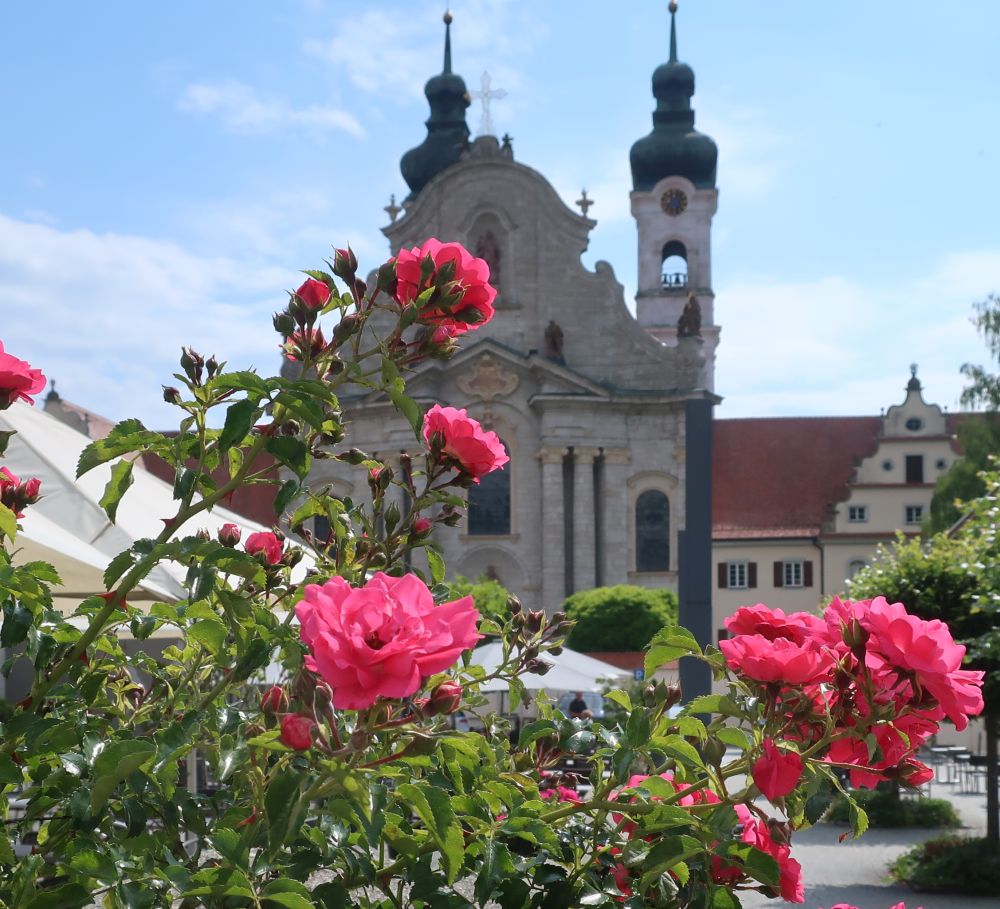 As impressive a snap as I thought I could take of the magnificent Zwiefalten Monastery nestled deep in the South German Baroque village of the same name: 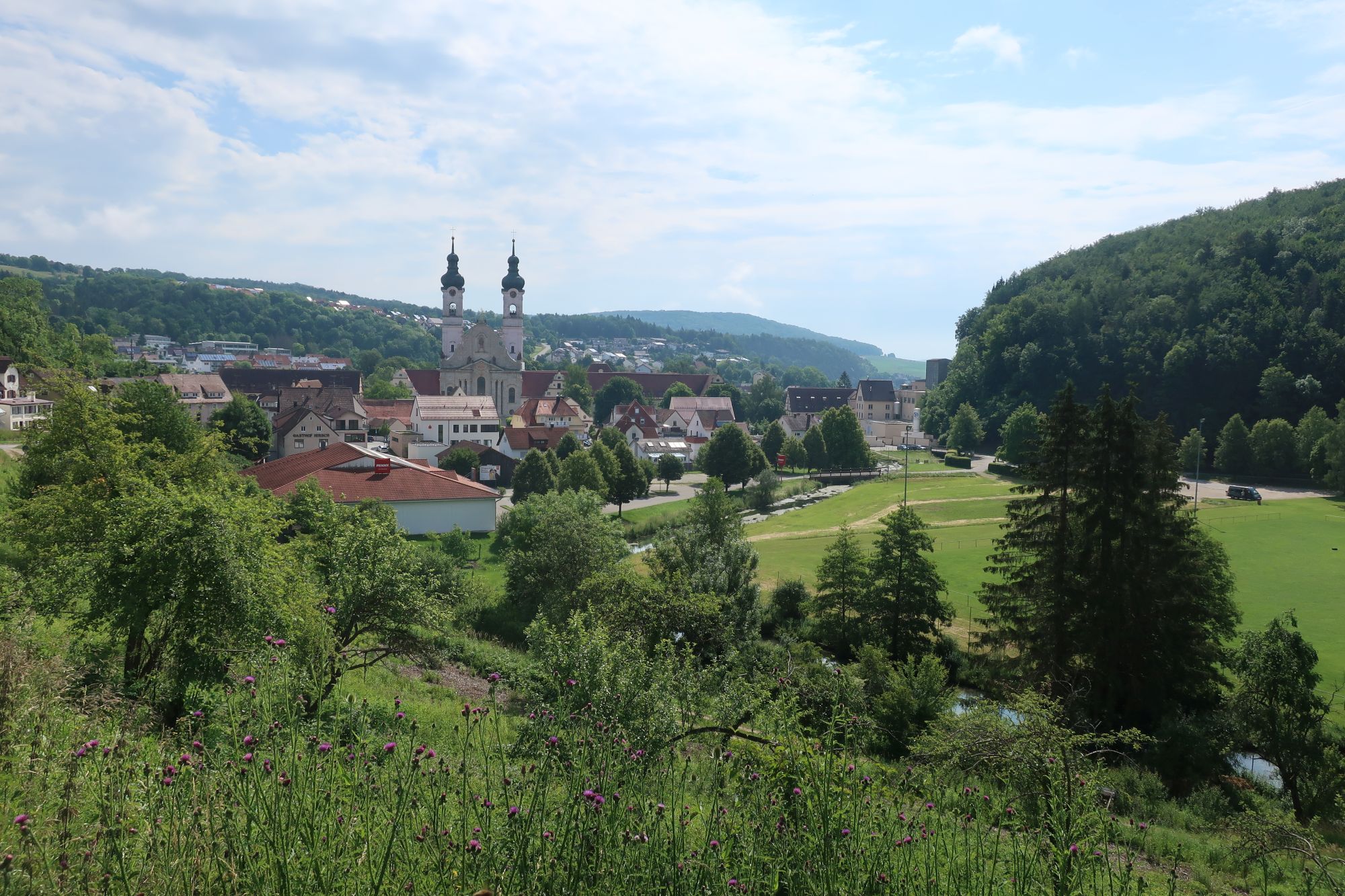 Continuing the series, the Parc has a nice fountain: 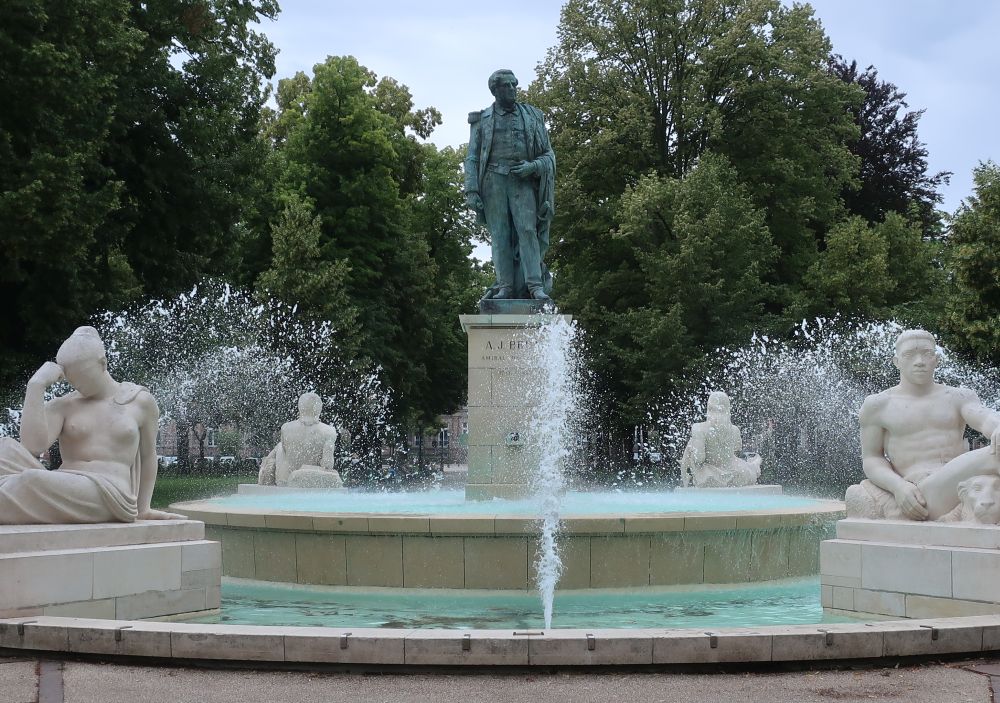 Continuing the series . . . It’s amazing – I’ve lived in Europe for over 20 years, never really paying much attention to whether you can find the mighty Califormia Giant Sequoia trees here or not – but, once I spotted one, it seems I am spotting them all over the place!

Here is an example of a Giant Sequoia tree I spotted in the Parc du Champ de Mars in Colmar, in Eastern France: 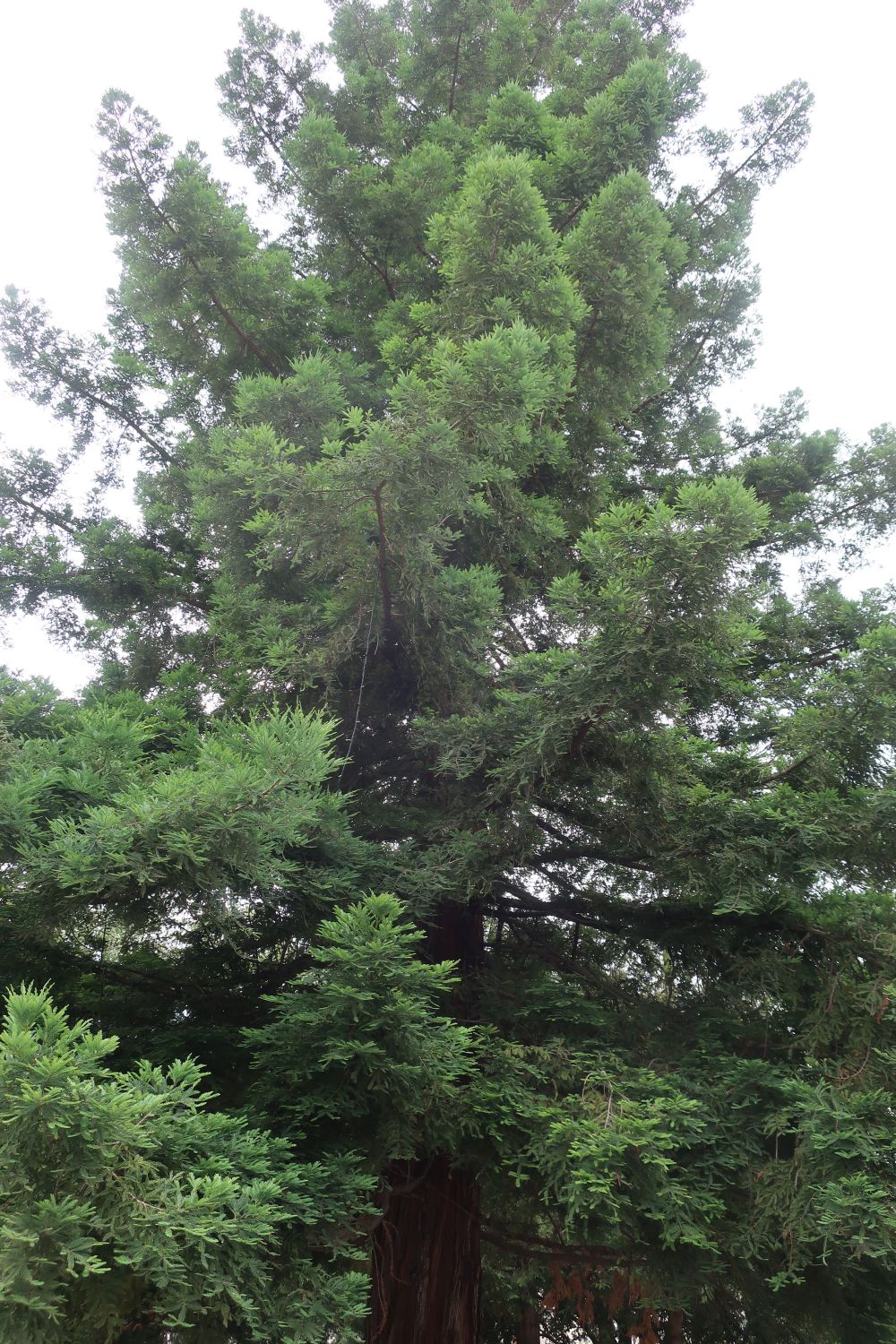 There is a small plaque beneath this behemoth, which reads

Bill of Rights of the United States 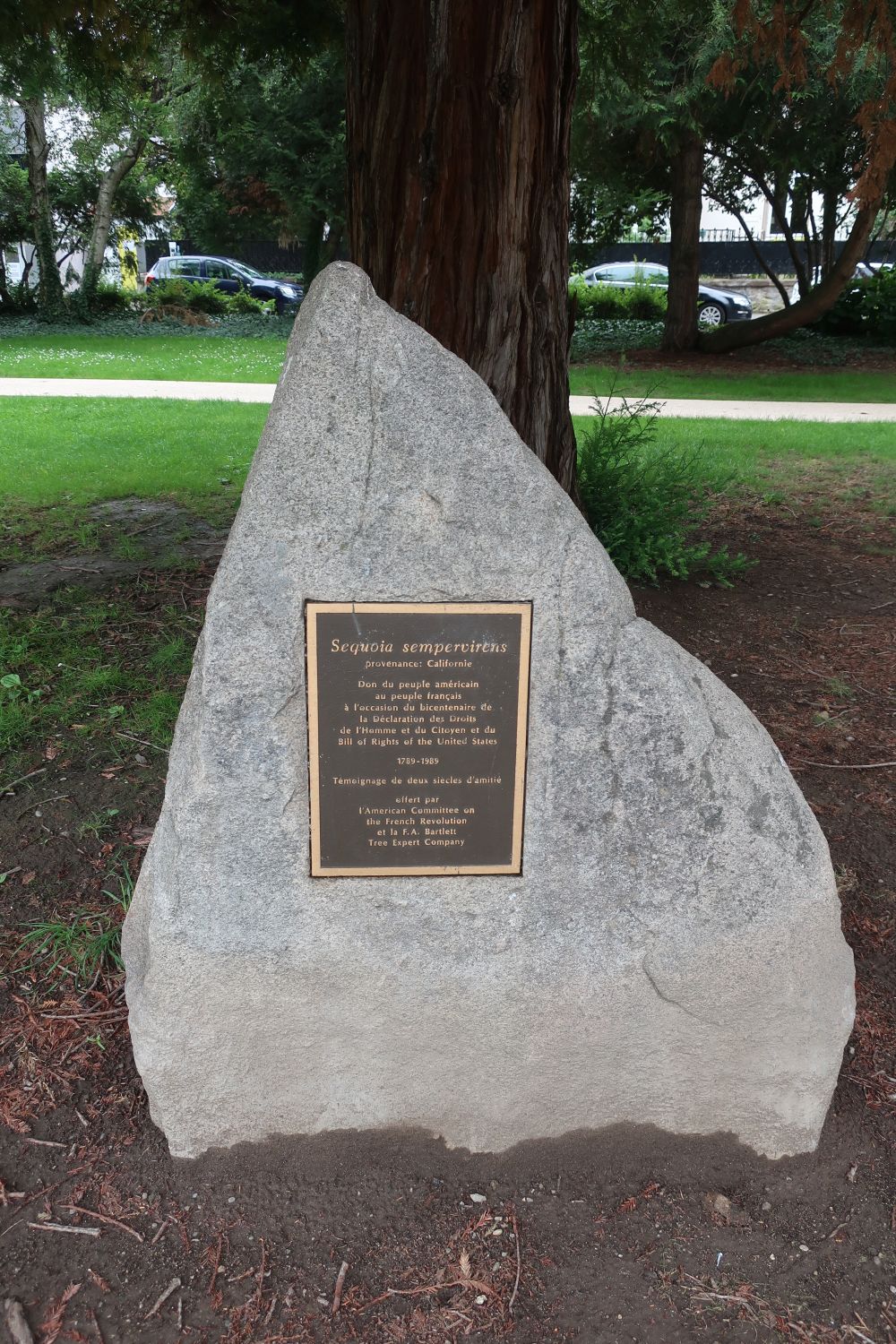 Colmar is an interesting city on the border between France and Germany. As you can see from this snap – and indeed, as you can see from just about anywhere in Colmar – there was significant damage from centuries of war that leaves ancient buildings standing next to new ones: 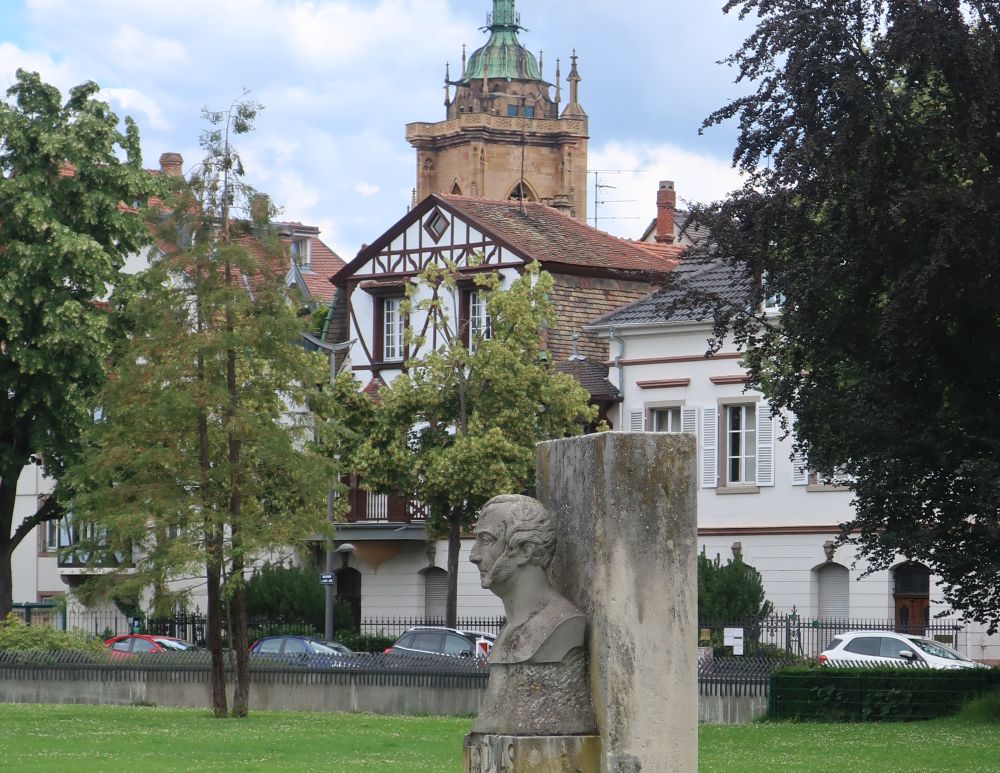 Just like it’s brother the Globe, I spotted this in the Southern German village of Stuttgart-Vaihingen, 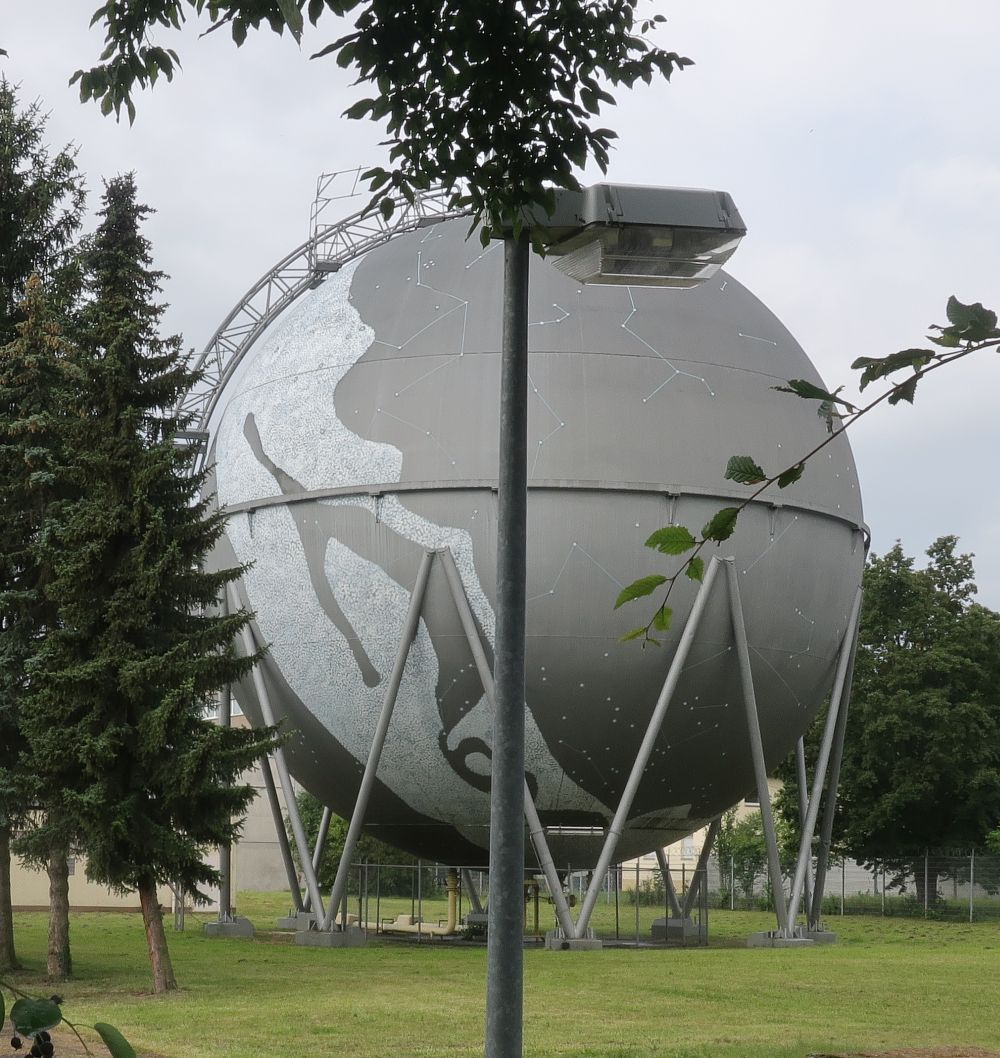 Idea from a friend of mine in the UK: chicken breast (Poulet) that I butterflied and pounded even thinner, wrapped around a tiny piece of sausage (Nürnberger Bratwurst) and including thin slices of cheese (Emmenthaler Käse) in the roll (Roulade), finally wrapped with slices of ham (Vorderschinken). I then wrapped it very tightly in aluminum foil, and baked at 220 C for 30 minutes: 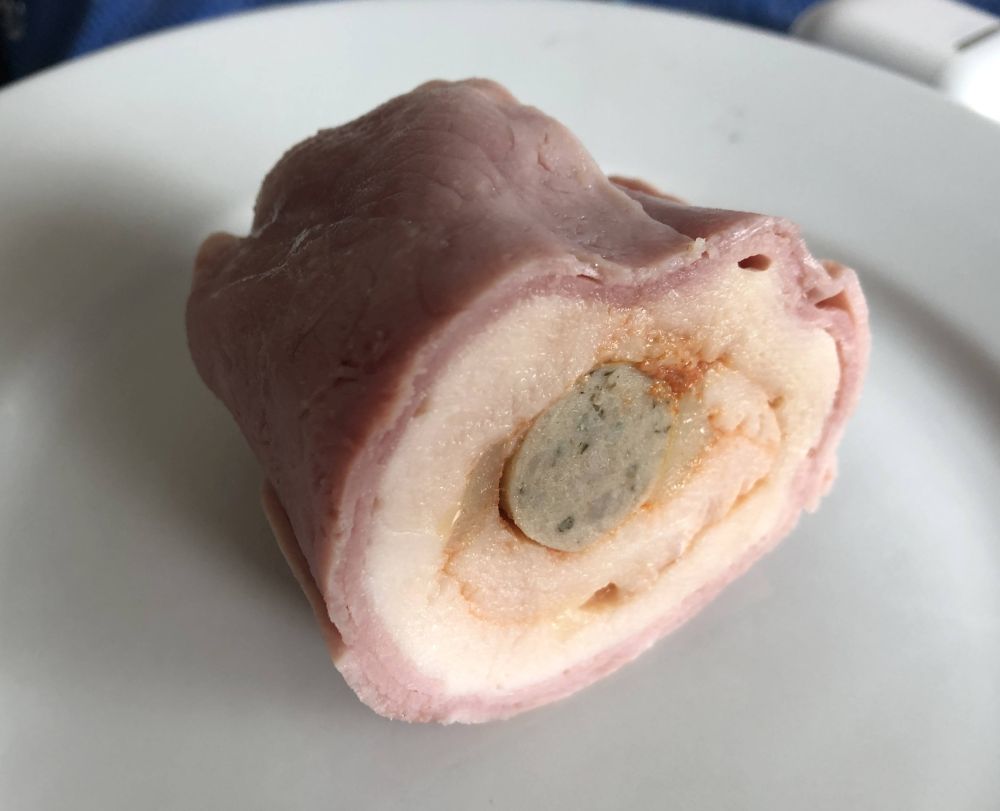 The amazing thing is that, after baking, it retains it shape very firmly, almost like the more well-known Fleischkäse.