One of the cool benefits of having photography as a hobby is that it gives you the chance to find out a little bit more about things you normally take for granted.

Case in point, an antenna used for mobile telephones: 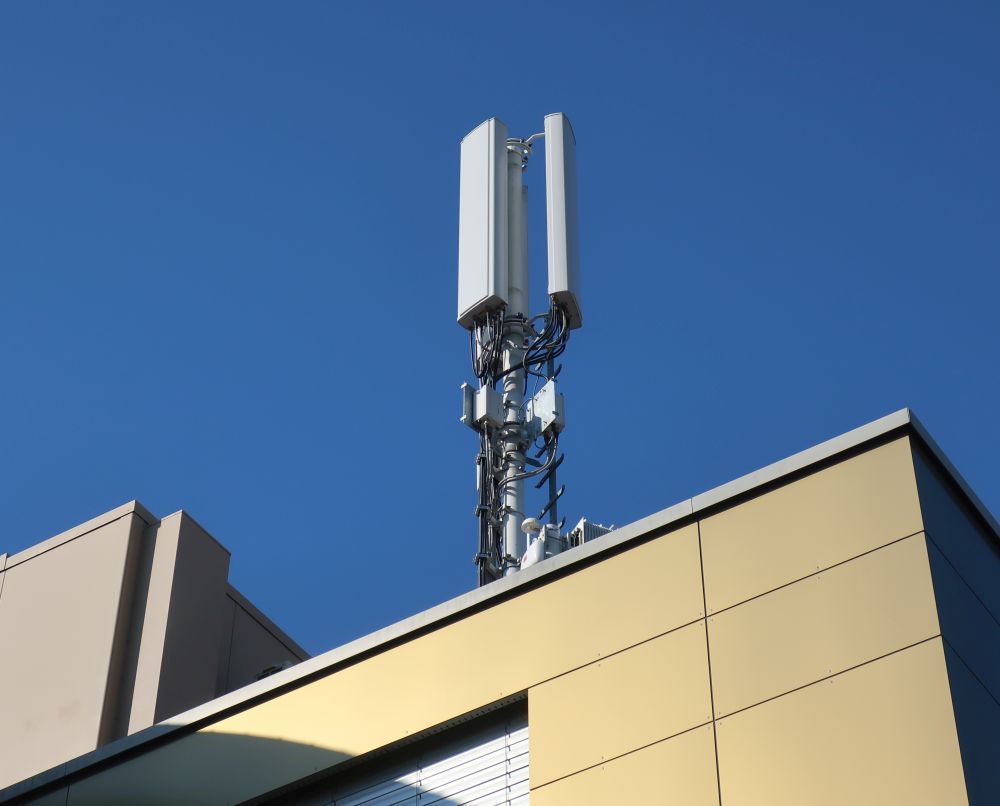 Turns out the official name is Base Transceiver Station (BTS) or “base station” for short.

Well, you may remember the lively telephone conversations between my Dad and his Uncle Eddy, a retired steel mill worker who regrets voting for Trump.  He was many that lost their jobs when the heavy industries of the Mahoning Valley in Ohio pulled out, 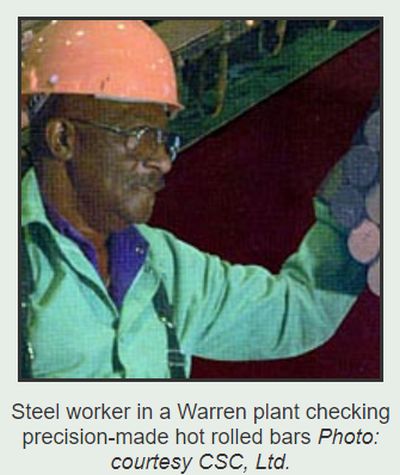 Uncle Eddy hasn’t quite gotten onto Twitter, but now it seems he’s at least learned voicemail. You can read his much shorter voicemails here.

OK, this one really was terrifying, intimidating, and threatening!

About three weeks ago I was on the early morning train to Zurich, just as the sun was rising. Between Winterthur and Kempthal I spotted what looked like a scrawny deer at the edge of the forest. When my eyes focused on it, I immediately realized it was no deer, but instead I thought mountain lion. But as I studied the animal as the train slowly moved by, I could see it was like no mountain lion I’ve seen: very long legs, stubby “half-tail,” relatively tiny head, and big spots.  Sadly, I could not reach my camera in time, but this is what it looked like: 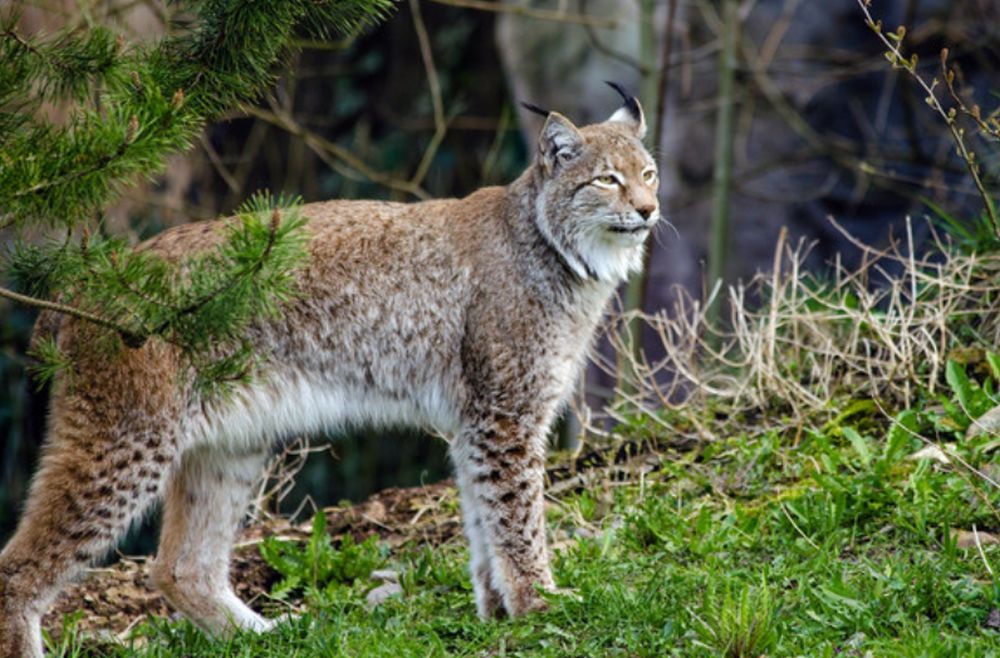 To be honest, the cat I spotted had much bigger spots, and fewer of them, than this one. Later in the day I did a bit of surfing on the Internet, and I learned there is an animal called a Lynx (in German: Luchs), and I also learned they have been seen close to where I live.

WARNING: This is not even remotely like a tiny pussycat or even a large tomcat. The animal I saw was as large as a cougar or mountain lion. In my judgement, it would have no problem to kill a man.  But since there seem to be so many in Switzerland, and so few encounters with people, thankfully it is hopefully very shy.

Ok, maybe it is not so terrifying, intimidating, and threatening, but nevertheless a stork walking around a highway rest area in Eastern France is really something to see. 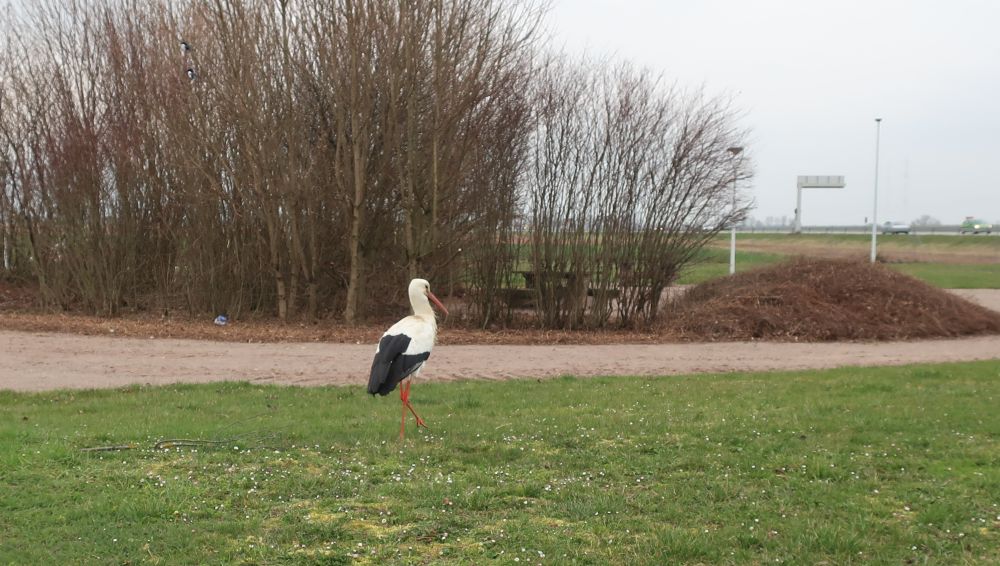 You can try all you want to tempt this fellow with potato chips, but unless you have a bag of fresh frogs or live mice, you’ll hardly be able to get his attention. 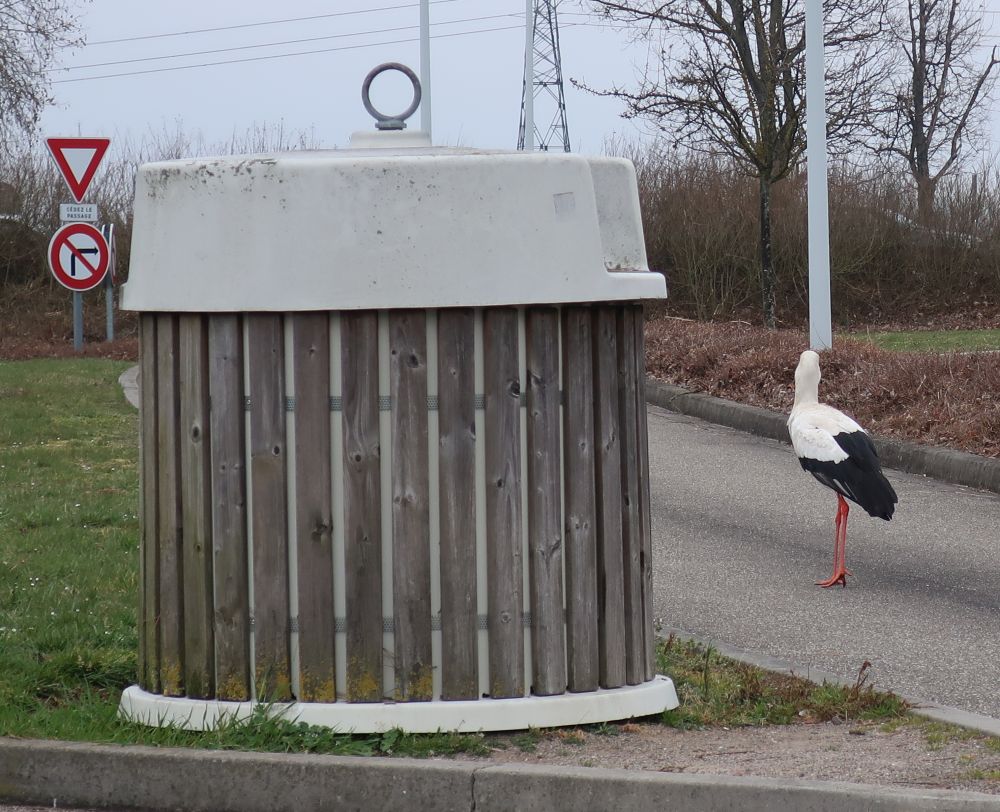 I am not sure why, but I find storks quite interesting, and you can find a number of examples of them on my blog in different countries.

(Trivia: scientists have recently learned that these European storks learn their flying skills from their social group.  If a baby stork is taught by an expert flyer, then each winter he/she will travel to and overwinter in North Africa. But if a baby stork learns from a stork with lessor flying skills, he/she will overwinter in Spain. Apparently – and this is the amazing bit – if a scientist attaches an accelerometer to a stork to measure their flight, then in the first 10 seconds of flight the scientists can recognize to which category of flyer the stork belongs: African super-flyer or more relaxing Spanish-flyer.  I am not sure if the scientists understand which storks are happier.)

Ok, maybe it is not so terrifying, intimidating, and threatening, but it is a hard-core work of art built out of heavy sheets of steel: 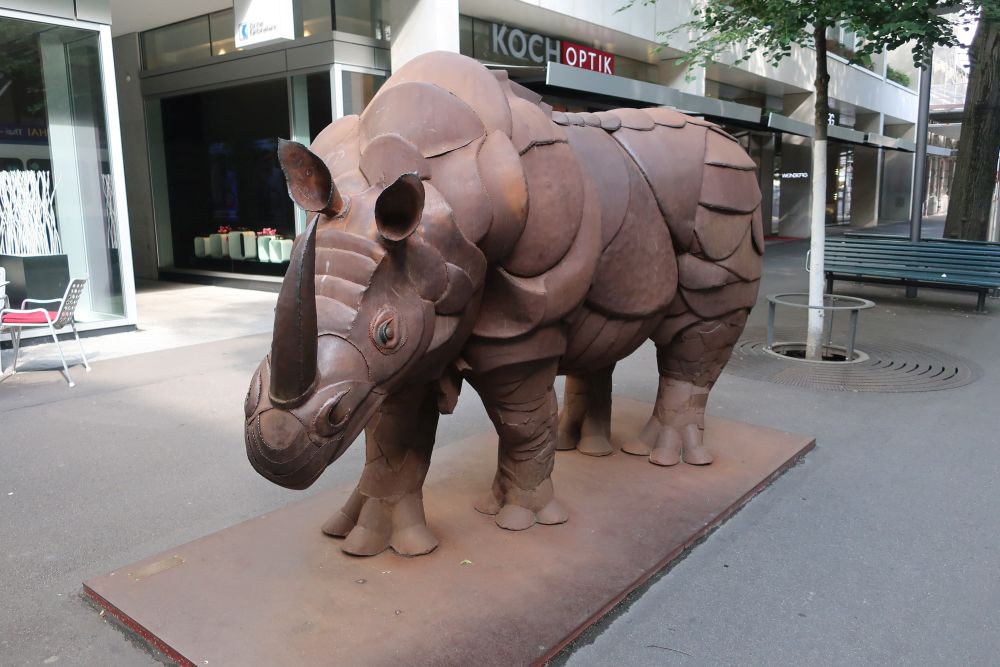 You’ll find this fellow on the far end of Bahnhofstrasse in Zürich, and more information is provided on the label at the lower right, 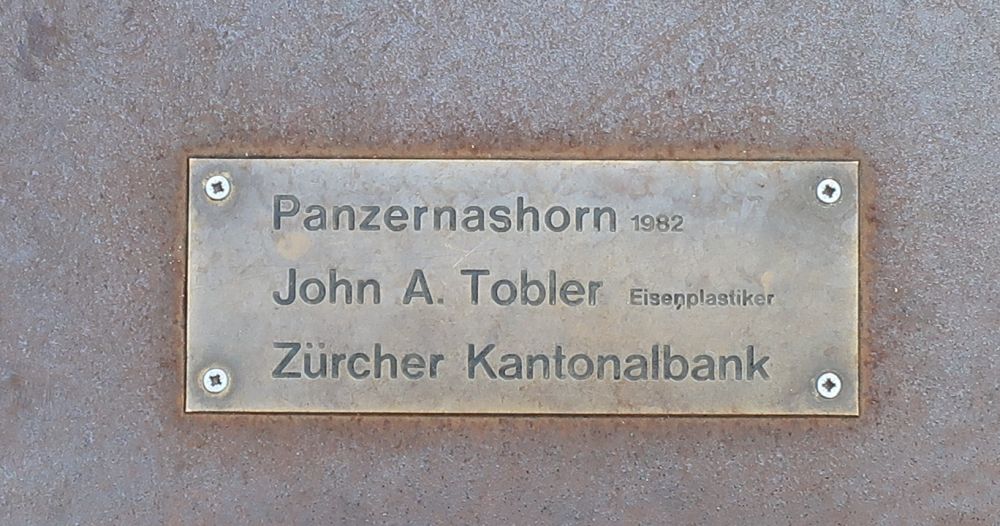 Ok, maybe it is not so terrifying, intimidating, and threatening, but here is a snap of the police cruisers that they use in my village in Switzerland: 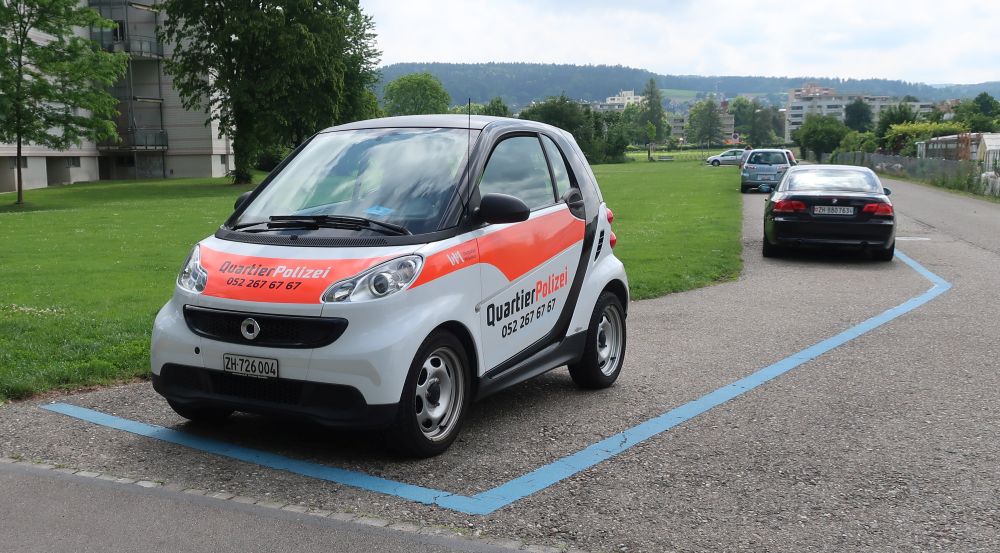 It has the advantage that you can literally park them anywhere, you can drive onto the sidewalk if there is a traffic jam.

And because this is Switzerland, they don’t need shotguns or space in the back for prisoners.

This shows a surprising amount of innovation.  Taken in the walled historical city of Riquewihr in Eastern France: 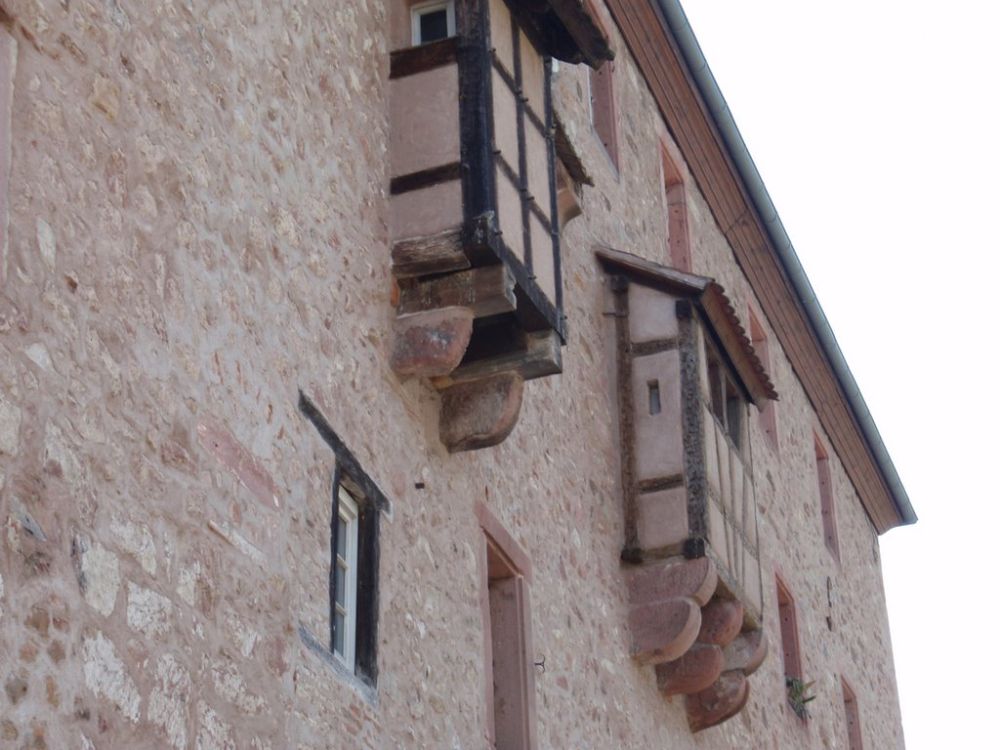