I’ve written about cable ferries before, such as the cable ferry on the Rhine.

My hobby is very dangerous in and of itself, visiting to the most secluded regions of France – regions so remote and backwards that it is rumored, the local inhabitants themselves (after centuries of in-breeding) often have no names.

The Gendarmarie cannot stop you – but if you ask their advice they caution strongly against it, pointing you back to the nearest McDonald’s restaurant.

But I like to throw caution to the wind, and despite the obvious dangers I set out to explore the delta where the Rhone River meets the Mediterranean Sea. Even today I’m one of the few Americans to have ever seen where the Mississippi River meets the Gulf of Mexico – that place, too, is better avoided by most tourists.

When driving to reach the secluded southern French village of Sainte-Marie-sur-la-Mer, the first thing you run across is a river and this sign: 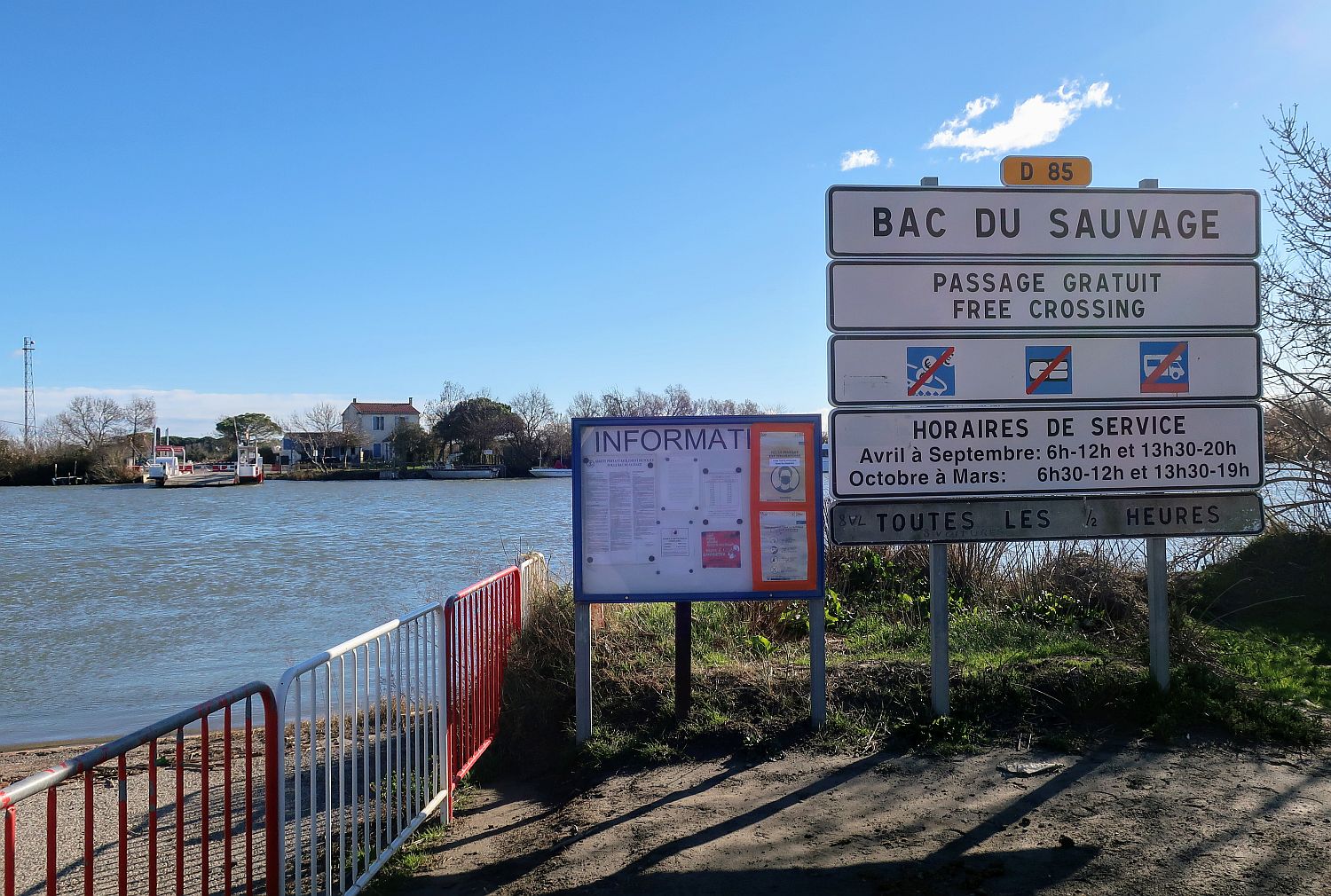 Then next thing that happens: you step out of your vehicle and – suddenly! frightfully! just as you open your car door!  – you are viciously attacked by two immense and deadly guard dogs: 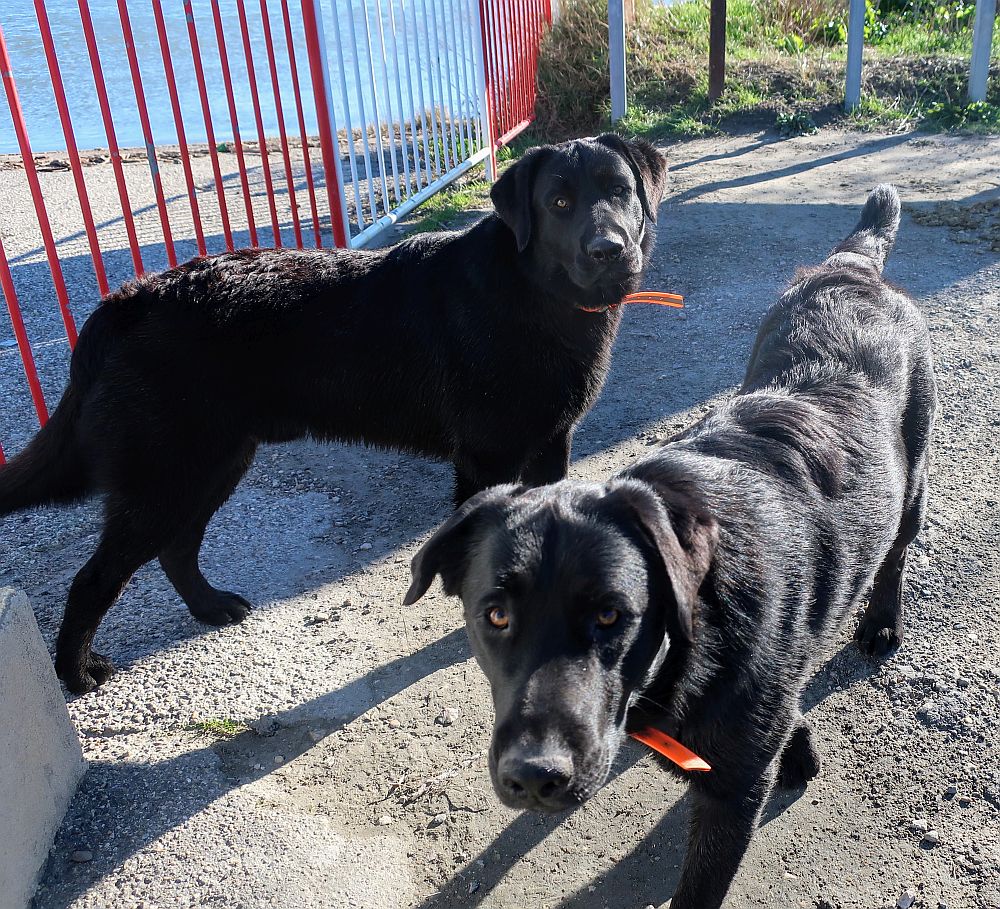 Sharp fangs. Massive jaws to crush their prey. A growl that could scare Satan himself. It’s doubtful that these hounds of hell would allow many tourists to live.

If these vicious attack dogs do in fact let you live – and in my case thankfully they did – then you’ll come to realize that the road has ended, and there is no bridge to the other side. The river you see here is the Le Petit Rhone, an offshoot of a huge French river that transports the glacial water from Switzerland down through France and into the Mediterranean Sea.

Hmmmmm, you think to yourself. I am way over here. I want to be way over there.

That’s not just one but two “way overs.”

Hmmmmm, you think some more. Does my car float? No.

So you think some more. Hmmmmm. (That’s the sound of you thinking.)

But there is in fact a ferry, as you can see on the left side of the above snap. And slowly . . . in a matter of minutes . . . it dawns on you: Hey, I bet that ferry is no coincidence! Someone must have put that way over here so that I could travel way over there. My problem of two “way overs” is solved!

I had to wait for over an hour (it was lunch time, and the French are very serious about their lunches, very carefully timing them to include finishing the glass of wine and smoking a cigarette), but eventually the ferry was loaded up and started on its way over: 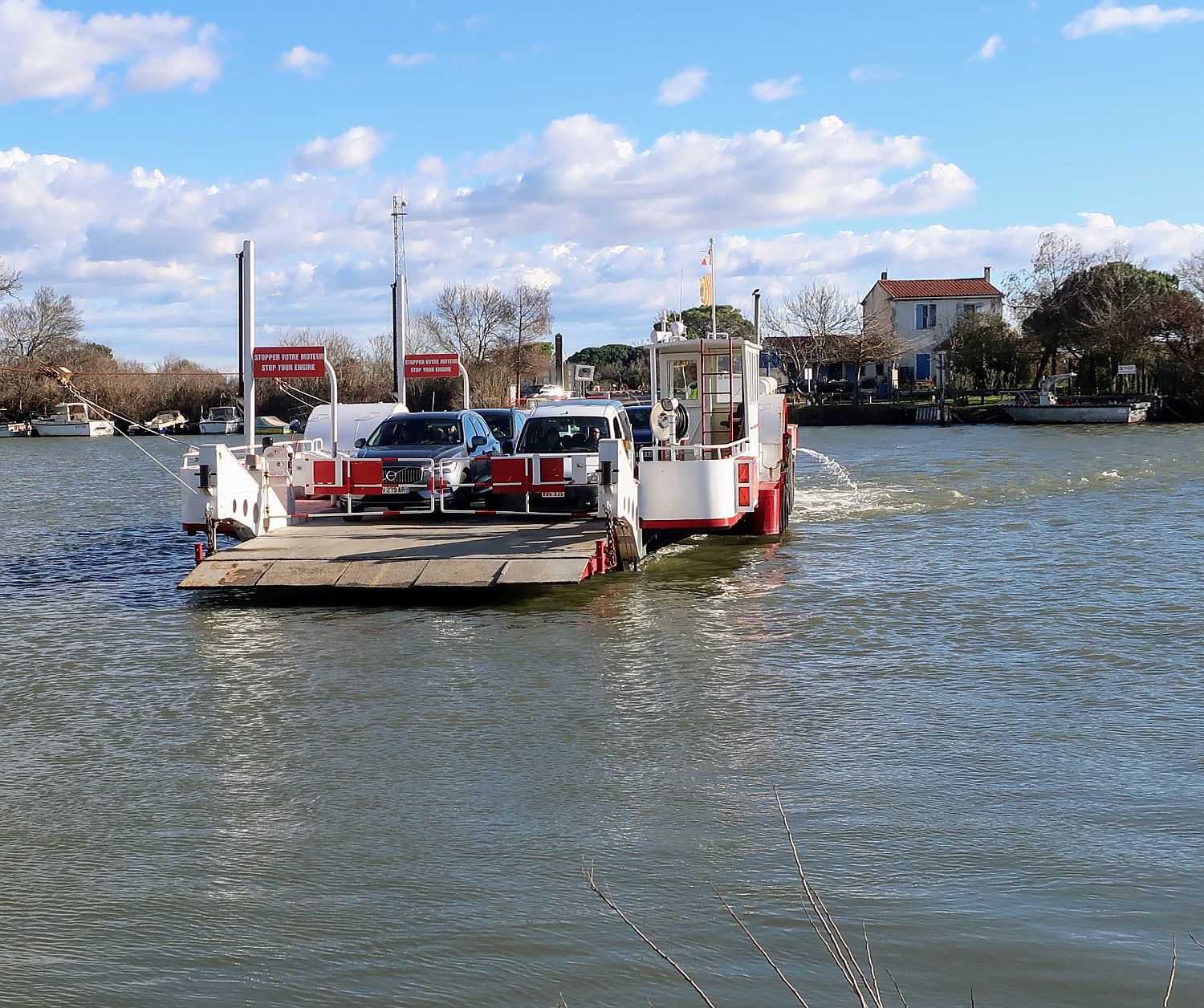 And here’s a snap just as it reached the shore: 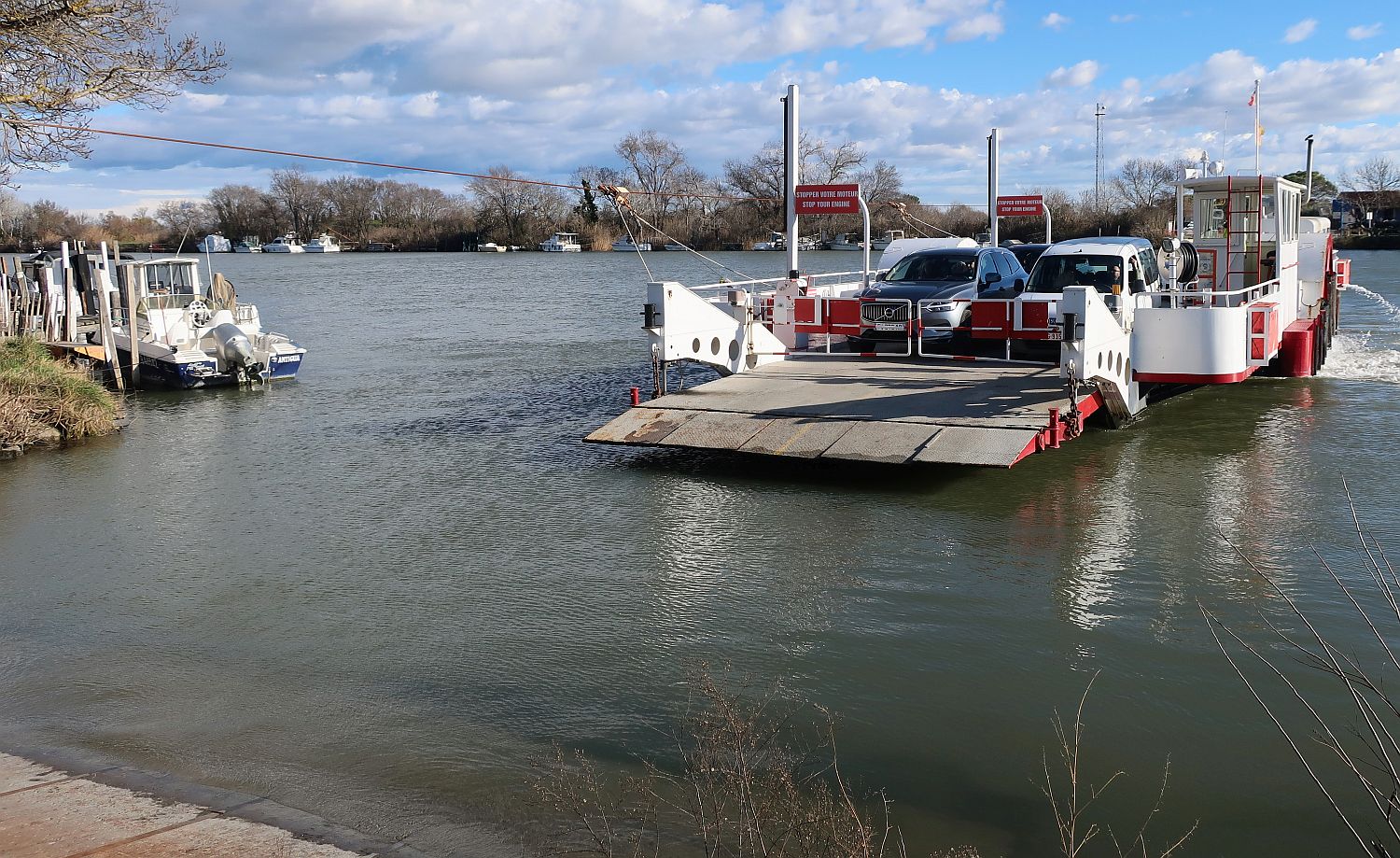 The difference between this ferry and the one in the link I posted: that ferry is attached to a steel cable, and the steel cable provides the locomotive force that pulls the ferry across the Rhine. In this case there is also a steel cable as you can see in the snap above, but the ferry has a motor and the cable is used to guide the ferry.

How did the story end?

I left the vicious hounds of hell (that interestingly liked having their ears scratched), got into my car, drove onto the ferry, crossed the river, and headed towards my fate in Sainte-Marie-de-la-Mer, a place so remote that the locals (after centuries of in-breeding) have no names and do not tolerate tourists lightly.