A guest blog, by Paul Cottingham

“Write me a guest blog,” Ken said. “Me?” I said. “Yes,” Ken said. “OK,” I said. What a fool, I think to myself, not Ken, ME! I agree to something I have not done in years – WRITE! Well, strictly not true, I write most weekends just not in this fashion but I will explain this one day. I am 51-year-old father of two, married to Carole for 25 years, I work in IT and I live in a small city in Yorkshire, England called York and from the age of 14 I wanted to be a rock star, well, sort of. I suppose what I want in life is the same as most others: I want to be happy in what I do and hopefully make other people happy also and if I can use a modicum of my talents to make people happy then it’s job done. 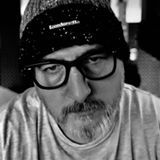 Let me explain. Back in 1979 I was friendly with two local kids and we discovered we liked the same music. We had moved into post-punk era of Joy Division, Durutti Column, Marine Girls and – some may disagree as they were in the punk era but for me as they extended life beyond punk – The Clash. Kicking around the neighbourhood one long summer day in the school holidays, Iain the elder of the trio suggested we should form a band. No hesitation from Pete and myself – we both spluttered out, brilliant! We had no clue how to play, no clue what instruments we would play, no clue how we would perform this task of forming a band. We just knew this was what we should do. Iain had a Clash poster above his bed and they were photographed for their first album with the three of them stood in an alley looking cool into the camera. Sold! That’s us, we are cool, we can be in a band, we can do it! Now all we had to do was go figure out how we could rule the world with our smouldering coolness and amazing music.

Hold on though, we looked at each other and paused. It was a little bit like that moment in The Graduate and a part of a scene that folks often do not notice right at the end of the movie, when Benjamin, played by Dustin Hoffman and Elaine, played by Katharine Ross, leap on to the bus and all the passengers look back at the couple whom have just run from the wedding in an act of spontaneous euphoric love. They too stop and look at each other, pretty much like we were right now, and realise the gravity of their actions, what have we done? Well, maybe not quite as dramatic and romantic as that but nonetheless to a 14-year-old kid whose only goal in life was to look cool and play a little football or soccer as our brothers from across the pond would say and have Sandra Pearson as my girlfriend this was a big deal and we are not backing down now.

It is 1979, Summer, three bored kids with 5 weeks of school holidays ahead of them, on the cusp of being the best band in the world, with no instruments, no talent (that we know of), no record deal but heaps of enthusiasm and smouldering coolness. What could possibly go wrong?

Paul Cottingham is one of those amazing senior IT leaders you run into all too infrequently: he has an innate sense for true leadership, and out of an interest in the well-being of his team he won’t stop until he has everyone fully motivated and pulling together. Paul is an accomplished musician who’s original compositions and multi-instrument production work is regularly aired on international radio programs such as the BBC. You can find links to his music here: (add link).