If you’ve read my post about Historical Jewry in Zurich, I might have left a few details out. Here’s the “backstory” as told by my father of Uncle Eddy Speaks Up fame:

Gabriel felt uneasy in Zurich at the best of times.  The Swiss have made it clear that he was not welcome. But he was back.  Worse, he was about to enter the old Synagogengasse and he didn’t much care for company. And yet here, in the evening mist, was someone else, pretending to read the plaque that told of the old pogroms there and holding a cell phone camera. 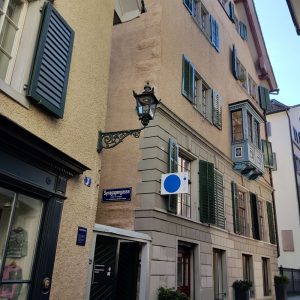 Gabriel’s hand went under the black slicker he wore and gripped the Beretta in the small of his back.  Standing in the shadows was a figure, quite tall and seemingly bald, he held a baseball cap to as to get closer to the plaque that marked the end of the alley. No one went to Synagogengasse, not even Jewish tourists.  Gabriel hoped that this was a coincidence, and that his cover wasn’t blown. No one was supposed to know he was in Zurich.

This was not a time for caution, and against his better judgment he had to move.  He slipped up quietly behind the stranger, pulling the Beretta, and jammed it into his ribs.  “If you want to live”, Gabriel said, “tell me who sent you.”

“Hey, man, quit the gun stuff”, said the stranger.  “I’m Ken, and I live here in Zurich”.  Gabriel’s eyes narrowed: “You have a slightly American accent – Ken.  If that’s your name.  And why take a picture of the Synagogengasse plaque?” 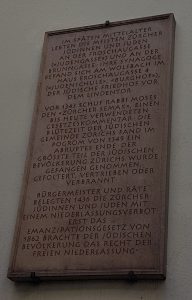 The stranger pushed the Beretta away from his ribs, and said: “the pictures are for my blog, you moron.  I travel all over the region – France, Germany, Italy – take interesting pictures and publish them in my blog.  This is a little known Jewish relic in Zurich and I wanted to see it.   I was trying to read the plaque when you came sneaking up, you jackass”.

Suddenly, it made sense to Gabriel.  “Wait a minute.  Ken —  blog — Zurich.  You’re Mr. Tradecraft’s friend Ken?”   “That’s right”, said Ken, now uneasy at the mention of the seldom-spoken name.   “I’m sorry.”, said Gabriel, “I’ll just slip away quietly and leave you to your reading.  Have you heard from Mr. T, lately?”

Ken looked at him, and made a what-a-dumb-ass-you-are face. “When Mr. T wants you to know where he is, he’ll call you.”