Answer, at least if you have never lived in India, VERY.

I lived in Bangalore for several years, and during that time my favorite place to eat lunch was a diner called Eden Park.  Interestingly, Eden Park sits just across from a Zoroastrian temple – you don’t see many of them!

Anyway, here is a snap of me eating lunch with a friend: 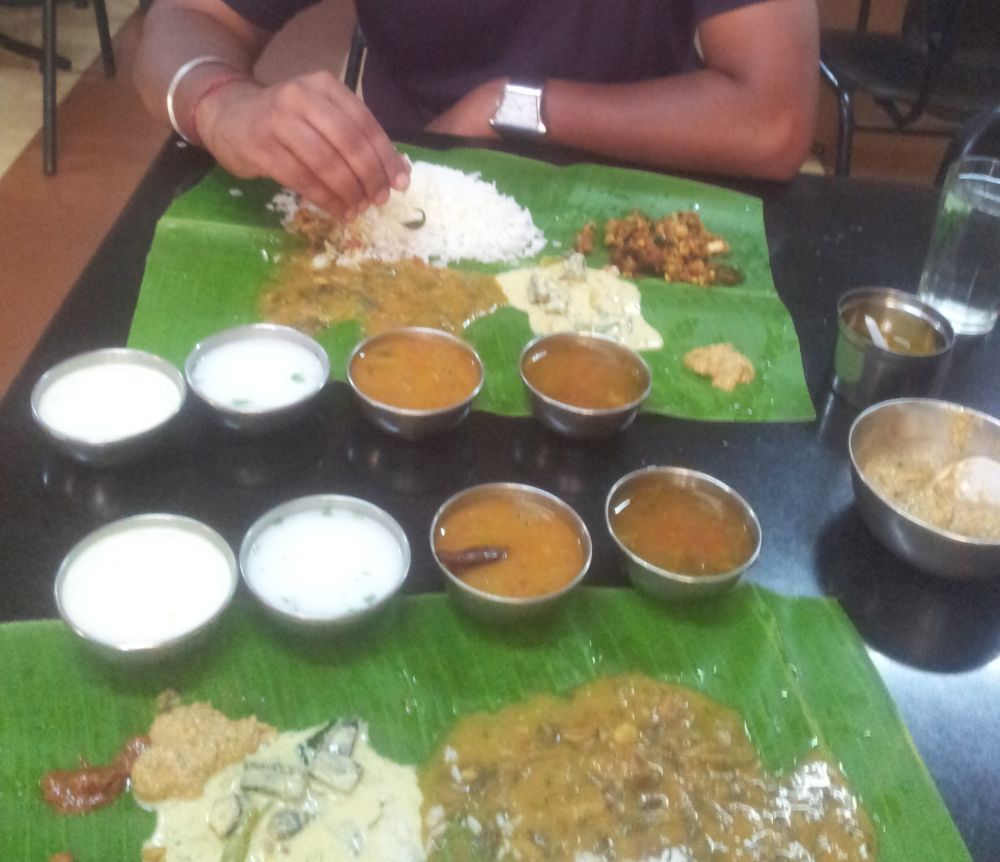 If you’ve never been to India, there is a lot going on in this snap that you probably don’t know about.

First, you’ll notice how my friend it sitting. I don’t know if I’d go so far to say it is rude to eat with your left hand, but a right hand approach is definitely the favored one, so the left hand is normally kept in the lap or off the table, unless it is absolutely positively needed for something. But it can be used and most people do use it from time to time.

Now onto the other features.

You’ll notice the food is on a wet banana leaf. The banana leaves are placed on the table dry, but then you use a bit of water to wash off the leave and brush the water onto the floor. I’ve been to banana plant plantations all over Southern India, where the banana leaves are harvested and sent to the restaurants.

It is an all-you-can eat deal – circulating waiters carry pots of steaming rice and toppings, and if you need either rice or more toppings, they will give them to you freely. The little orange tin on the left is sambar – a tamarind based sauce that it ubiquitous to South India, and the orange tin on the right is rasam, a (mostly but not exclusively) tamarind based soup. Interestingly, there is not much question about how to consume sambar: you mix it into your rice; if you tried to drink it like soup, I think that would be a bit like drinking a cup of ketchup. But rasam on the other hand, being much thinner, is a whole different cricket game: you can pour it over rice, dip something into eat, or (what I usually did) just drink it like soup.

It is a bit of a myth that you eat this exclusively with your fingers.  I did – and many Southern Indians do – but there are both Northern and Southern Indians who prefer to eat with a utensil, such as a spoon. My Indian friends have told me that studies involving brain scans have shown that when you eat with your hands you get a greater food pleasure, due to the tactile sensations.

One of the white tins contains curded milk, similar to yoghurt. It can be mixed into the rice with sambar, but it can also be eaten at the end of the meal, with a bit of sugar poured on it, like a dessert.

And as for the toppings: one of them is universally a dhal (lentils), which is frequently the case in Indian cuisine, since dhals have a very high protein content, and this is important to a mostly vegetarian culture.

Sadly, what this snap does not show are my papadams, also known as papads. ,At this hotel at least they need to be ordered separately, and it is usual for people to eat one or two. (I have a friend in England who eats them, however, by the dozen.) They are essentially fried tortillas. They are not used to spoon up food – rather (and this is purely my own opinion) their crispy-crunchiness makes a great change to the sticky stewlike nature of the food, so by crunching on one every now and again during your meal, it somehow helps to clean your pallet. Interestingly, most papads in India are made by rural housewives as part of a cottage industry: they create them at home and then they are shipped to centers for redistribution.

This meal is known to the Bangalore locals as “veg meals” – not, interesting enough, a “veg meal” but rather the plural form is used. For example, to order this you would say to the waiter at the diner “I would like a veg meals please.” Except – you really wouldn’t: diners here are called hotels not diners, and this one serves veg meals exclusively during lunch, so you don’t need to order anything.

What this snap does not show – but what is also quite common – is that many religious people move a slight portion of their food to the top of the leaf and leave it there, uneaten, as an offering to their gods.

What this snap also does not show are a few other things on the table: a metal container of drinking water, and containers of Indian pickles that I have documented elsewhere.

So for people with no experience in India there are really a lot of things happening that Indians take for granted – and I am quite sure this is the case with American and Western foods that some Asians, on a first trip outside of Asia, may be unaware about: the many different pieces of silverware used in a multi-course meal are a good example.